AN ISLAND GETAWAY THAT ENDS IN DEATH

Murder on the Aloha Express
by Sally J. Smith and Jean Steffens

Murder on the Aloha Express will be $0.99 during the tour.

Sally J. Smith and Jean Steffens will be awarding a $25 Amazon or Barnes and Noble Gift Card to a randomly drawn winner via Rafflecopter during the tour.

MURDER ON THE ALOHA EXPRESS Blurb:

Travel agent Gabby LeClair, a divorced big-city transplant trying to find some aloha spirit in her soul, prides herself on working hard to give the Aloha Lagoon Resort guests a once-in-a-lifetime experience. But that turns out to be more than anyone bargained for when the body of a client is found dead during one of Gabby's island tours. The victim is a lawyer who’s escorted a small group to Aloha Lagoon for distribution of a deceased billionaire’s estate...but it looks like someone believes the only good lawyer is a dead lawyer. Between the bad press causing her phone to go silent and the police working on "island time," it's up to Gabby it find the killer before her business goes belly up. With the help of her good friends, and a hot helicopter pilot with a flirtatious streak, Gabby turns sleuth to figure out just which member of the lawyer's party had it in for him. But before long it’s clear there’s way more at stake than her livelihood, and if Gabby isn’t careful, she and her friends may find themselves on an island getaway to death. 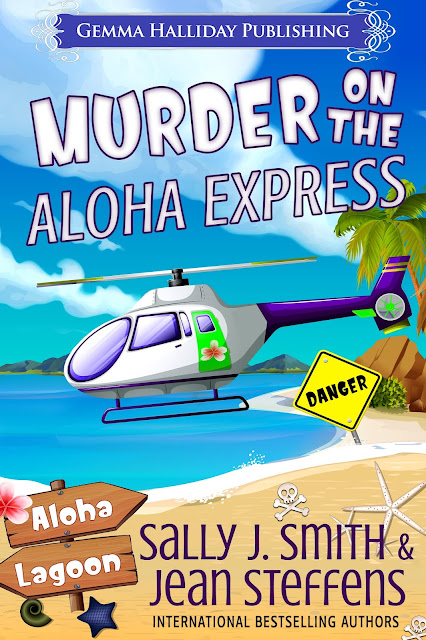 MURDER ON THE ALOHA EXPRESS Excerpt:

The twang of a steel guitar broke into the post-dinner chatter, followed by drums, and the MC announced the Aloha Lagoon Ahi Fire Dancers. I had to say this was my favorite part of the show, and I turned away from my amateur sleuthing to give my full attention to those muscular young men in their loincloths. It was an intense blend of pounding music and visual conflagration. Anyone who wasn't mesmerized by it was probably dead asleep.

One who was obviously wide-awake was Nina Wesley who leapt up, ran to the stage, and nearly incinerated herself and one poor dancer by scooting up beside him and shaking her personality at him.

"Oh, man." TJ rose and headed for the stage.

Her gyrations brought resort security, and between TJ and two security guards, Aunt Nina was carted off the stage and away from the luau, singing at the top of her lungs.

As they passed by our table, she called out, "Rick! Room 270." She made a phone with her thumb and little finger then blew a kiss.

Rick covered his face with both hands and shook his head.

"You've created a monster," I said softly in his ear.
Murder on the Aloha Express will be $0.99 during the tour.
BN:  http://www.barnesandnoble.com/w/murder-on-the-aloha-express-sally-j-smith/1123670603

Sally J. Smith and Jean Steffens, are partners in crime—crime writing, that is. They live in the Valley of the Sun in Arizona, awesome for eight months out of the year, an inferno the other four. They write bloody murder, flirty romance, and wicked humor all in one package.

ADDITIONALLY: (U.S. ONLY) We will also have a giveaway through our Website—http://www.smithandsteffens.com —consisting of a beach towel, coffee mug, and signed copy of Murder on the Aloha Express.

Sally J. Smith and Jean Steffens will be awarding a $25 Amazon or Barnes and Noble Gift Card to a randomly drawn winner via Rafflecopter during the tour.

Caroline, what a bright and fresh page you have created. Thank you for putting so much time and effort into making everything look so great.

So what's next for the pair of you? More collaborating? Less?

Thanks for hosting, I LOVED this book and can't wait to read the next one in this series.

Both Danger Cove and Aloha Lagoon are multi-author written series.

The next book in the Aloha Lagoon series is "DEADLY WIPEOUT!" by Beth Prentice. So good!!
Coming September 13th.

Glad everyone is enjoying the posts.

It looks like everyone is enjoying themselves. Have a great evening.