CC:  Welcome back to the blog, Barbara.

BWD:  Thanks, Caroline.  It’s a pleasure to drop in again! I'm looking forward to chatting with readers and giving away a book. Details on that will be at the end of my post.

CC:  Tell us something about yourself.  How long have you been writing?

BWD:  I’ve always been a storyteller and started writing when I was about four, though in those days spelling and even printing legibly were optional.  My first book was “published” when I was nine, complete with hand-illustrated cover.  I typed “The End” on my first full-length novel when I was in the eighth grade.  This was a mystery with a romance subplot, and it had a sequel.  As I’m now a romance writer, I haven’t strayed far from my roots.

CC:   I “wrote” and illustrated books when I was very young too. As I remember, they all involved a princess (me) in a pretty dress, a knight on a white horse, and a castle. Where do you prefer to work?  Do use a PC or laptop?

My best place to write is at my office desk, which I think comes from years of being a secretary sitting at a computer.  It’s just a natural place for me to work, and I can write so much faster on a computer than in longhand.  In fact, I write so much, I’ve worn out more than a few laptops and keyboards.  LOL

When I’m brainstorming or away from a computer—such as in bed in the middle of the night or riding in a taxi—I’m fine with paper and pen, too.

CC:  I have keys that look like those—no letters left on them, but I love a particular type keyboard. My husband keeps a version of this favorite keyboard in reserve so I can change as one bites the dust. Can you tell readers something about what you write?

BWD:  I would love to. And I also love to chat, so I hope your readers will free to leave comments and questions for me if they have any. I'll be giving away an autographed print book, winner's choice of my available backlist, to one reader (U.S./Canada mailing address, please) who leaves a comment by midnight Monday night, May 22nd.

I’m currently writing short contemporary romances for both Harlequin Western Romance and Entangled Bliss.  The Westerns are small-town stories filled with cowboys and ranchers, cute kids, loving yet interfering family members, and nosy but caring neighbors.  The Bliss books all contain the same fun elements, just minus the cowboys and ranchers.

CC:  Congratulations on the release of your new book.  Please tell us about it.

BWD:  Thanks for asking!  The new release is The Rancher’s Baby Proposal.  In this story, the hero, Reagan, returns to his hometown with his young son.  Reagan’s parents have both died and he wants to clear out and sell his family’s ranch so he can put the memories and the town behind him for good.  Unfortunately for him, the heroine wants nothing more than for him to stay in Cowboy Creek—with her.

Here’s the back cover blurb from the book:

Ally Martinez has always been known as a fun and flirty kind of gal. But deep down she’s never forgotten the cowboy who left town. When her crush Reagan Chase comes home after a five-year absence, Ally knows this is her big chance. The guy I’ve always wanted. Only Reagan has something different in mind…

Still reeling from his last relationship, Reagan needs a babysitter for his month-old son. With Ally’s help, he can get his family’s ranch ready for sale and get out of Cowboy Creek. The problem? Ally is one seriously cute distraction. But Reagan will do whatever it takes to keep his heart safe. Even if it means losing the only place—and the only woman—he can call home. 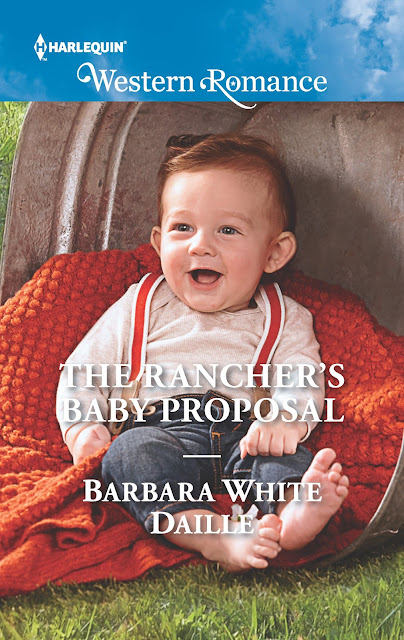 CC:  That sounds great!  This book is part of a series, isn’t it?

BWD:  Yes.  It’s the newest story in my Hitching Post Hotel series.  The books are written so that each one stands alone.  The hero and heroine reach their happy ending by the last page of their story, which means the books don’t necessarily need to be read in order.  That’s true of all my books.

CC:  Tell us more about the Hitching Post Hotel.

The Hitching Post is set on a ranch in Cowboy Creek, New Mexico.  Jed Garland owns both the ranch and the hotel, and his granddaughters are in the process of helping him turn the hotel into a destination wedding locale.  The series began as a trio of books with the matchmaking Jed bound and determined to match his three granddaughters with men he’d handpicked for them.  Of course he runs out of granddaughters eventually!  But readers love Jed and his “girls,” and they wanted more stories about all the Garlands and the Hitching Post.  At that point, Grandpa Jed moved on to matching up family friends.  :)

CC:   What about your books for Entangled Bliss?

BWD:  The series is called Snowflake Valley.  This is a tiny town in Nevada nestled between two snow-covered mountains.  It’s also a tourist town dedicated to Christmas, and the first books in the series are all set during different winter holidays, which is making them very fun to write.

The series revolves around sisters who find love in Snowflake Valley—whether they like the idea or not!  Again, these are stand-alone stories.  Book one, Snowbound with Mr. Wrong, was out in November and the second is due to release this August. 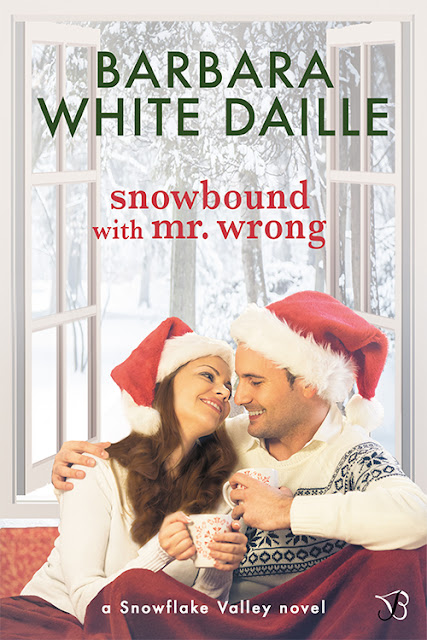 CC:  Can you share a sample from The Rancher’s Baby Proposal?

BWD:  I would love to.  And I also love to chat, so I hope your readers will feel free to leave comments and questions for me if they have any.

I’ll introduce the sample by saying that though the heroine, Ally, is doing a great job with Reagan’s son, she’s only now learning to feel comfortable around children.  This excerpt comes from one of my favorite scenes starring Ally with Reagan’s one-month-old baby.  Hope you and your readers enjoy it!

Ally attempted to light a tall white candle with a match that bobbed and shook and went out in her hand.

She struck another match and tried again. She had to get these candles lit.

“When you’re planning a seduction,” she told Sean, “you need to set the right mood.” She shot a look across the room at him in his infant seat. “But don’t go getting any ideas, you hear me? You’re way too young to think about seducing a girl.”

Finished with the lighting ceremony, she waved her hand, gesturing at the candles and pewter holder she had brought from home, the china and glasses and silverware she had found in the dining room hutch here and had washed in the kitchen sink, the vase of hot pink and flaming red tulips she had picked up at the L-G Store.

She walked over to stand beside him. To be safe, she had placed his seat on one of the sturdy pine captain’s chairs from the kitchen set, which she had moved far away from the candles on the table.

As she looked down, Sean shifted his arm.

“Oh, you think it deserves a fist bump, huh?” She reached over to touch her knuckles to his tiny hand. “Thanks for the vote of confidence.”
For a moment, her own confidence began to flicker like the flames on the candles. Then she lifted her chin and stiffened her spine. With her arms held straight out at her sides, she twirled once slowly in front of Sean. “And what do you think of this?”

When she looked down at him again, his eyes had closed. He had drifted off to sleep.

“Great,” she whispered. “I hope that’s not your way of telling me what to expect with your daddy.”

CC:  It sounds like Ally is doing a fine job with the baby so far!

BWD:  To be honest, she’s making much better progress with Sean than with his daddy.

BWD: Absolutely. I'll share my "offiical" bio here and will list some links below. Thank you again for inviting me to stop by!

Barbara White Daille lives with her husband in the sunny Southwest. Though they love the warm winters and the lizards in their front yard, they haven’t gotten used to the scorpions in the bathroom. Barbara also loves writing, reading, and chocolate. Come to think of it, she enjoys writing about those subjects, too!

Barbara wrote her first short story at the age of nine, then typed "The End" to her first novel many years later...in the eighth grade. Now she's writing contemporary romance on a daily basis, with an ongoing series from Harlequin Western Romance (The Hitching Post Hotel) and a new series from Entangled Bliss (Snowflake Valley).  Sign up for her newsletter to keep up with the latest in her writing life:  http://barbarawhitedaille.com/newsletter.

Find The Rancher’s Baby Proposal at any of these locations:

Thank you for sharing with readers, Barbara. And thanks for offering a giveaway.

Caroline - thanks so much for inviting me to stop by for the interview. You asked great questions!

Readers - I hope you'll feel free to leave a comment or ask questions of your own.

I'll be giving away an autographed print book, winner's choice of my available backlist, to one reader (US/Canada mailing address, please) who leaves a comment below by midnight next Monday night, May 29th.

NOTE: The winner's name will be posted here in a comment on May 30th, and the winner will have until midnight June 2nd to get in touch with me through the Contact form at my website. The website link is listed above in the post.

Thanks for reading the blog!

Sounds like a great book, Barbara. I love westerns. Good luck with your release.

Thanks very much, C.B.! Westerns (contemporary) are among my favorites, too.

the book sounds good. Do you use real life inspirations in your books?

Hi, Rachael - I don't. Maybe bits and pieces of people I know (a personality quirk, a career, a mannerism, or a way of speaking) will find their way into my books. But I don't take folks I know and use them as characters in my stories.

I have too many people already running around in my head, volunteering for the positions. :)

Hope all who celebrated the holiday had a great long weekend.

Congrats, C.B. Please get in touch with me through the Contact form at my website (link in the post above) with your U.S. mailing address. As I'm a day late in announcing this due to the holiday, I'll extend the date to contact me by two days - through June 4th. :)

Thanks, and congrats again!