A VISIT FROM BETH TRISSEL

What a pleasure to have one of the nicest people anywhere visit my blog. I've taken Beth Trissel's  online classes about herbs and heirloom flowers, and they've helped me in several books. She is a versatile lady and I am pleased to know her.


Thanks so much for having me on your lovely blog, Caroline. I’m excited to be back into time travels again.

The blend of history, mystery, fantasy, romance, and the paranormal were a fun meld to write in Somewhere My Lady (Book 1, Ladies in Time). I set the story in my home state of Virginia, as I have all my time travels thus far. Although, that’s not necessarily where the characters end up. I’ve written several time travels with the characters transported to the Scottish Highlands, but I am fully embracing my deep Virginia roots in this new release, book one of my Ladies in Time series, published by The Wild Rose Press. The following stories in the series will likely also take place in Virginia. My heart belongs here, especially the beautiful Shenandoah Valley.

I live in the valley on a farm that’s been in my husband’s family for several generations, but Somewhere My Lady unfolds in an 18th century manor along the James River. Harrison Hall, in the story, is fashioned after Shirley Plantation with elements of my father’s family home, a stately brick house, called Chapel Hill (circa 1816) located in the Southern end of the valley.

I’m fascinated with the past and enjoy researching different eras. Not only do I sometimes get plot ideas this way, but it helps me bring the story to life. I love old homes, have lived in several—do now—and often visited others. My father’s family homeplace is the inspiration behind many of the old homes in my stories. When I was a kid, I looked for Narnia in an ancient wardrobe there. Fortunately, I didn’t shut myself inside. C.S. Lewis cautions against that.

Research into family genealogy was the original inspiration behind my writing fiction in the first place. Before that, it was all nonfiction. I learned my ancestors arrived here in the early colonial days and left amazing accounts. One family line goes back to Jamestown, another to the Salem Witch Trials. My forebears were caught up in the French and Indian War, some taken captive and adopted into tribes, others killed, and some we don’t know what happened to them. Ancestors fought valiantly in the American Revolution, the Civil War…and left a rich legacy. Much fodder for the imagination.

Gardening is also a passion of mine, and one I inherited. I love to grow herbs and heirloom flowers with their fragrant connection to the past. I included a lovely garden in Somewhere My Lady, and used herbs in the story. Inhale deeply as you read.

I should also mention my love of music. Edith's Theme, the hauntingly beautiful song from Crimson Peak, stirred my imagination long before I watched the movie, which was after I finished writing the book. Other songs in the soundtrack also sent my imagination soaring, but that one really did. Scenes took shape in my mind, especially the ghostly dance I wrote in chapter one.

"Somewhere My Lady is a fun supernatural romance that will have you slipping in and out of the past and future as if you were a spirit yourself.’’ ~Colleen’s Book Reviews

Lorna Randolph is hired for the summer at Harrison Hall in Virginia, where Revolutionary-War reenactors provide guided tours of the elegant old home. She doesn't expect to receive a note and a kiss from the handsome young man who then vanishes into mist.
Harrison Hall itself has plans for Lorna – and for Hart Harrison, her momentary suitor and its 18th century heir. Past and present are bound by pledges of love, and modern science melds with old skills and history as Harrison Hall takes Lorna and Hart through time in a race to solve a mystery and save Hart's life before the Midsummer Ball. 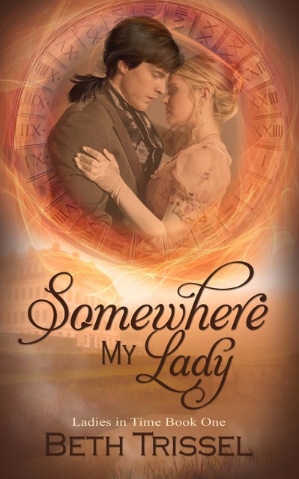 Something about him held her spellbound…the tilt of his head, arch of his brow, glimpse of his profile… She followed his every move with the fixity of an owl.

He turned blue-gray eyes toward her and sensuous lips curved into a smile on his handsome face. Hands down. No contest. He was the hottest guy ever. Her heart beat a thrilling new rhythm.

He circled closer to where she stood rooted in the foyer, not moving a toe, scarcely drawing breath. Did he truly see her backed tremulously against the wall, or did it only feel that way?

Unlike the others in the ghostly assembly, his eyes didn’t skirt past her. He paused in the dance. Bending at the shoulders, he tipped his hand to her in a genteel flourish.

He’d freakin’ bowed. Her jaw dropped. He most definitely saw her. And she sure as heck saw him.

A sparking sizzle jumped between them, awakening her as she’d never been roused before. Even more than when the house charged through her at her arrival. It was as if she were plugged in—to him.

How that could be, she had no idea, but when he gazed into her eyes, time seemed to stop. She spiraled into moonless stars, and back again to this dizzying realm. To him. Even if she were dreaming, she’d never forget this moment.~

Somewhere My Lady is available from all major online booksellers. In Kindle at: https://www.amazon.com/Somewhere-Lady-Ladies-Time-Book-ebook/dp/B071VTNC7V

Married to my high school sweetheart, I live on a farm in the Shenandoah Valley of Virginia surrounded by my human family and furbabies. An avid gardener, my love of herbs and heirloom plants figures into my work. The rich history of Virginia, the Native Americans, and the people who journeyed here from far beyond her borders are at the heart of my inspiration. I’m especially drawn to colonial America and the drama of the American Revolution. And I love a good ghost story. In addition to Young Adult and New Adult fantasy romance, I also write historical, time travel, and paranormal romance, plus nonfiction.

Photos by Beth and her daughter, Elise.

Thanks so much for having me on your lovely blog, Caroline, and doing such a fabulous presentation with this post.

Thanks so much, LeeAnn.

The story sounds intriguing and your flowers are to die for! Best of luck with the book.

Always enjoy your blog posts, Beth, and your flowers of course make me jealous. Much success with the new release.

Thanks Linda and Pl. I was out in those very flower/herb beds weeding until forced to take a break. I thoroughly enjoyed writing this story!

The Ladies in Time series sounds wonderful, what a terrific family history from which to draw your inspirations. The flowers are gorgeous. Wishing you much success on your new release.

Thanks so much, Gini.

I'm so pleased you're sharing with readers today, Beth. I'm pleased to have your print copy of your herbs and flowers. I've referred to it many times, plus looking through the pages is pleasant. Best wishes for continued success with your writing that you richly deserve.

Thanks so much for you kind wishes, Caroline. And I'm glad you enjoy my herbal. I find it helpful myself.

Love hearing about Beth's life and books.
Sue B