What kind of romance stories do you enjoy? I like stories that have a good romance but also something to put the main characters in jeopardy. I don’t want anything too bad to happen to them, but there has to be the chance of perilous circumstances.
BRIDE’S ADVENTURE, Loving A Rancher book 4, is one of my favorite of my stories. Amelia Douglas is daring and intelligent. Readers were introduced to her in MURDOCH’S BRIDE, in which she was one of the stranded travelers on the Murdoch ranch near Cottonwood Springs, Montana.
After the death of her husband in Chicago, Amelia’s in-laws with whom she and her husband had lived asked her to leave immediately. Fortunately, her brother Charlie in Oregon tells her to come there and stay with him. Being stranded in a snowstorm en route was an adventure, but nothing like she finds when she gets to Salem, Oregon.
After a couple of daring stunts, Amelia realizes she is pushing her luck and endangering her brother, so she returns to Cottonwood Springs. The adventure doesn’t end there, though.
This book was one of Debra Holland’s Montana Sky Series for Kindle World. Now that Amazon has deleted the Kindle World program, the rights have reverted to me. If you haven’t read this book, I hope you’ll order it. It's available as an e-book and in print and is also in KU.
If you read it previously, please leave a review. When Amazon deleted the Kindle World program, they also deleted all the reviews. 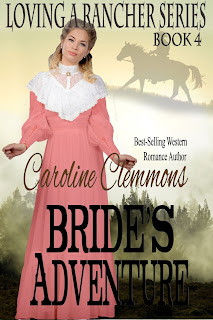 Here’s an excerpt of BRIDE’S ADVENTURE:
A silvery-gray sky greeted Amelia when she left the train in Salem. She spotted her brother’s tall form and hair the same blond shade as her own. She waved and a big smile split his face as he hurried toward her. Charlie looked good until he was closer and she became aware of lines furrowing his forehead and at the corners of his blue eyes.
His hug lifted her off her feet. “You look even prettier than I remembered.”
She laughed with joy and the relief of seeing him again, “You’re as silver-tongued as ever. I’m so glad to see you. Even though I’m a Douglas now, we’re all that’s left of the Baxter family and I want us to always remain close.”
“We will, Sis.” He squeezed her shoulders and gestured to a man beside him. “This is Tony Ward. He and I work together and share a house, but there’s plenty of room for you. Tony, this is my sister, Mrs. Amelia Douglas.”
The handsome man was tall and well-dressed. His dark hair and brown eyes were a contrast to her brother as he bowed slightly. “My pleasure, Mrs. Douglas. Charlie has spoken of you often.” His accent reminded her of Chicago, but not quite—maybe further east.
She linked her arm with that of her brother. “Nice to meet you, Mr. Ward. I’m excited to finally be here.”
The man nodded at the valise she’d set at her feet. “If you give me your check, I’ll get the rest of your luggage.”
She fished the claim ticket from her purse. “How kind of you, Mr. Ward. Mine is a brown trunk. While you do that, I need to send a wire.”
As his friend claimed her trunk, Charlie stuck by her side to the telegraph operator’s desk. She sent a telegram to Charity letting her know she’d arrived.
Her brother glanced over his shoulder at Tony. “Play along with whatever I say and don’t divulge any details of your plans. Tony’s always watching and listening but I’ll try to explain later.”
Her breath caught as a vice clamped around her chest. Her earlier fears were justified. A dozen questions popped into her mind, but Charlie’s expression silenced her.
He kissed her cheek and whispered. “Don’t be afraid, only extra cautious and act naïve.”
Hardly reassured, she wondered what had happened to her brother. Whatever the problem, it involved Mr. Ward. She forced a smile for the man as he and a porter approached with her trunk on a cart.