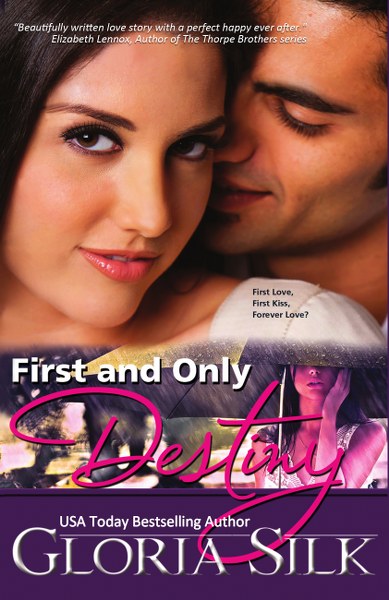 "Beautifully written love story. The prose in this book is extraordinary, the
emotions heart-breaking and the author leaves you hanging on the edge
right to the end of the story. I could feel the characters'
happiness, confusion, pain and sadness. When it rained, I felt that
rain on me, when the characters were laughing, I laughed - it was
really that good! I can't wait to read the next story in this book
and will add Ms. Silk to my "must-buy" authors. Love her
writing! Ms. Silk fills the pages with emotion - hope, happiness,
sadness, guilt, joy - you will run the gamut with this book."
Elizabeth Lennox, Author of the Thorpe Brothers series

Do you believe in love at first sight?
First love has never been more intense, heartbreaking, and oh so worth it!
Shy artist Lia cannot resist gorgeous genius, Devraj. Sparks fly and
their families and friends try to break them apart.

FIRST LOVE...
It’s love at first sketch for shy, sheltered art major Lia Abraham, when
she meets the Bollywood-gorgeous Devraj Shah at a London university.
But she refuses to show her undeniable attraction to the gregarious
genius who is being groomed for his family business empire. Nothing
can stand between her and her dreams of traveling and teaching art
across Europe. No taking risks or detours for Lia!

FIRST KISS…
The last thing Lia needs is a handsome distraction from her true love:
art. Although she protests, the charming Devraj, with his dimpled
grin and sparkling eyes, convinces Lia to be “just friends”.

As their friendship flares into an all-consuming passion, the growing
pressure from both families changes the landscape of both their lives.

FOREVER LOVE?
Despite loving him to distraction, will Lia’s gratitude to her frail
grandparents, who raised her, and her loyalty to her cultural ties,
force her to forsake the forbidden fruit of her love for Devraj?

Or can she stand up for her first and only love and face their uncharted
future head on?

First and Only Destiny by Gloria Silk

North London, June 1995
Leaving the tomb-like silence of the Rolls Royce, Lia gripped the heavy skirt of her imprisoning wedding dress, while accepting the stooping, old man’s help to brave the summer downpour.
The big, bat-like umbrella over them absorbed the mini bullets of the rain, turning the pure white of her gown to gunmetal grey.

Was it sunrise or sunset? She did not know or care. The universe had lost all colour and warmth.
Her feet and heart refused to cooperate as the old man tightened his embrace around her and urged her toward the arched doors of the imposing granite-grey building ahead of them.

A familiar magnetic pull made her turn her head to look over her shoulder, across the road. Lips trembling under the stifling veil, she saw the soaking, unshaven, Devraj standing by his car.

She felt his agony, heard his thoughts, How can you throw away your life, our destiny? Please come back to me!

But the sleek, dark river of the London street may as well have been oceans separating them, like a chasm of culture neither could overcome.

Even if this was her biggest mistake, he had to see her enter the house of her God.

Suddenly, thunder reverberated above them. She turned away from the love of her life. Her first love was an illusion and a part of her past, now. He had to be.

Look forward, not back.

“Love will come, you’ll see. Howard will make you happy.” Her grandmother’s mantra over the past endless weeks had almost made Lia want to scream that it would only make her grandparents happy. But... here she was, still walking in the opposite direction from Devraj. For his own sake.
Whether or not he ever forgave her, one day she would be proud of her strength and sacrifice.
Tears streaming down her face, she forced her legs up the stairs into the dimness. The cool, musty scent of the traditions ingrained into the spirit of the synagogue made her shiver.

Faces of curious strangers watched her advance towards the waiting bridegroom. The high jewel-tone stained-glass windows, to which generations of proud families had contributed, seemed about to shatter in on her. And, as every hesitant step led her closer to the man at the end of the aisle, his patent happiness made her steps falter, and she wanted to shout, it’s a lie; you know nothing about me!

She almost stumbled, but Dedda supported her. The nightmare continued.

But this was her destiny, not the heart-broken, young man out in the rain.

Statue-still, she lowered her burning eyes behind the veil. If Devraj ran up that aisle, demanding he was her rightful soul mate, would she flee with him? No!

Sucking in a shaky breath, she prayed for strength from the same God who had gifted—and then snatched away—an alternate, impossible future.

Anchoring her limbs, she swore to be the perfect wife to the smiling man beside her. She was not marrying him for her grandparents, but for a much bigger reason.

Or—she raised her head, heart pounding—she could grab the long train of her white dress as restrictive as armour, and escape into the arms of her one and only true love.

She took another fortifying breath.

Her fingers unfurled from their fists like opening petals.

A PORTION OF ALL GLORIA SILK BOOK PROCEEDS GO TO CANADIAN CANCER SOCIETY. 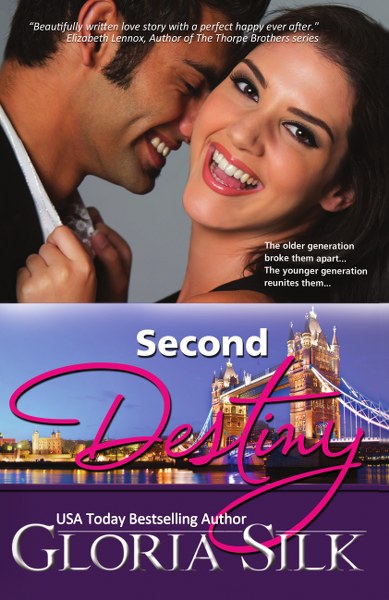 "Beautifully written love story with a perfect happy ever after." Elizabeth
Lennox, Author of the Thorpe Brothers series

The standalone bestseller, First and Only Destiny gave Lia and Devraj
their own well deserved dramatic and satisfying happy-ever-after!
BUT what if...

What if Lia and Devraj lose each other within minutes and are both left
devastated, unable to forget each other?

Second Destiny is an emotional, sensuous story of the star-crossed lovers
reuniting 19 years later. Just as Lia discovers her husband's
infidelity, her first love, Devraj is at her door. Lia's 18-year-old
daughter and Devraj's nephew are repeating romantic history. Can Lia
and the Bollywood-gorgeous hero put their past behind, or will their
sizzling, intense passion reignite and endanger everything in its path?

THE OLDER GENERATION BROKE THEM APART…
Lia Abraham gave up everything for her family and culture—art, autonomy
and even self-worth. Worst of all was the sacrifice of
Bollywood-gorgeous, idealistic Devraj Shah, when Lia caved in to
pressure from both their families. She broke her first love’s heart
by marrying the “right” Jewish man.

THE YOUNGER GENERATION REUNITES THEM…
Nineteen years later, minutes after Lia demands a divorce from her cheating
husband, her world turns upside down again; Devraj is at her door.
His nephew and Lia’s feisty teenage daughter are repeating history.
They’re in love, but the now reserved, enigmatic Devraj is dead-set
against the couple’s marriage plans. He is convinced Lia’s
daughter will ultimately reject his nephew the way Lia had rejected Devraj.

After years of feeling caged in a loveless marriage, Lia embraces her newly
found freedom, and her resurgent passion for Devraj is irresistible.
Once again, she surrenders to the true love of her life, but their
affair re-ignites opposition from both families. Will Lia’s second
chance at love again destroy her loved ones and her dreams?

Torn once again between her love for Devraj, her family responsibilities
and her need for true independence, will Lia choose duty over the
desires of her heart?

USA Today Bestselling author, Gloria Silk, loves writing sensuous,
uplifting and unforgettable romance and women's fiction. Her powerful
stories are filled with passion without cultural borders, which will
take you to various exotic locales around the world. Her books focus
on the many facets of romantic relationships with strong and complex
family bonds.

Born in Russia, her love of travel was ingrained within her from a very
young age, as she has lived in various parts of Europe and the
Mediterranean. Some of her favorite visited places are Austria,
France, the Middle East, Hawaii and Hong Kong. Her next planned
excursion is to Australia and New Zealand.

England (where she was brought up) holds a very special place in her heart
with all its history and lush, green landscapes. Her background in
English literature, writing and psychology help her create
well-rounded, unique characters.

After spending many years in London, England where she met and married her
own loving hero, she now lives - and happily writes - in Toronto, Canada.

For a very special reward of a custom book gift set go to
gloriasilk.com/books

I like the way the covers relate. Very nicely done.

this will go to my tbr