Woo Hoo! Today is release day for MONK’S BRIDE, book 5 of the Kincaid Series. I can hardly wait for you to read this book and let me know what you think!

MONK’S BRIDE came about because I’ve had numerous requests for Monk’s story since he appeared as a secondary character in THE MOST UNSUITABLE HUSBAND, Kincaid book 2. In preparation for this release, I’ve re-edited and updated the first four Kincaid novels.

Kincaid romances 1-4 are sensual but book 5 is sweet due to Monk’s character. He didn’t come by his nickname by being a womanizer. I love the man and admired his character in THE MOST UNSUITABLE HUSBAND. If you haven’t yet read that book, the universal Amazon link is http://mybook.to/Husband.

I’m so excited for you to read Monk’s story in MONK’S BRIDE.

A destitute widow; a reformed con man; the danger that links them…

Betsie Galloway Hirsch has escaped Memphis with her son Liam. Her gambling husband tricked the wrong people and they’re demanding Betsie pay his debts—or else. She’s come to Kincaid Springs to stay with her mother and seek a safe place for her son. Being so far from her former home, she feels secure. That is, until danger confronts her.

After 34 years alone, Michael “Monk” Magonagle is falling in love with Betsie and is fond of her son. Monk is certain she is not free of the men her late husband cheated. Although he is not a violent man by nature, Monk is brave and willing to fight for Betsie’s safety. He and the men of the Kincaid family prepare to meet the enemy.

How can Betsie and Liam be protected from the approaching danger? Will she and Monk be able to forge a love that endures or will one of them be silenced forever? What toll will the enemy exact?

The Universal Amazon buy link is http://mybook.to/Monk MONK’S BRIDE is in e-book and is enrolled in KU. Soon it will be available in print. 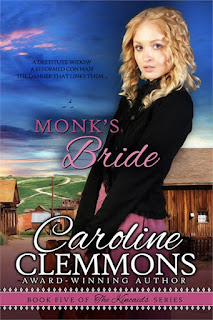 Here’s an excerpt of their first kiss:

They were at the Kincaid front door. She hated their time together was over.

Monk put his hands on her shoulders. “Betsie, may I kiss you goodnight?”

Inside she was yelling yes!, but she pretended to be demure. She certainly didn’t want him to think she was a hoyden. “I think that would be all right.”

He removed his hat and pulled her into an embrace. She’d thought he meant a kiss on the cheek, but that wasn’t the case. His lips sought hers softly at first, then as if he would consume her. Without conscious thought her arms went around him, pulling him closer.

When he broke the kiss, it was as if she’d been deprived of a part of herself. Each of them panted with ragged breaths. He held her a few minutes longer, his forehead against hers.

“I apologize for getting carried away.”

“Please don’t. I was hanging on to you as if I was drowning and you were a life preserver.”

He brushed an errant curl from her face. “Then you’re not sorry?”

“Not a bit. I have to admit I was carried away, too. Perhaps it’s not proper to admit, but I enjoyed your kisses.”

Her admission brought a wide smile to his face. “Goodnight, Betsie. I’ll be by to escort you to Mass in the morning. I hope I may call again soon.”

“I look forward to both.” She slipped inside and hurried to her room.

She changed into her night clothes and crept in to check on Liam. He was sound asleep with his dog cuddled close but had kicked off his cover. She leaned over to give him a kiss and tuck his sheet around him.

Her lips still tingled from Monk’s kiss. He was her beau, a serious beau. She wanted to dance around the room. Instead, she crept to her room and crawled into her bed. She’d have sweet dreams tonight.

Posted by Caroline Clemmons at 7:54 AM