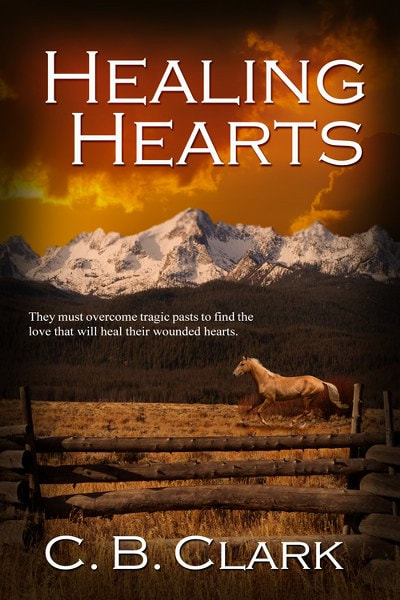 Reeling from loss and heartbreak, Stella King is desperate to escape painful
memories. The position of nanny on an isolated ranch in British
Columbia's rugged Chilcotin Plateau seems the answer to her prayers.

Cattle rancher, Dawson Wheeler, has worked hard to overcome grief and build
a predictable world for his young daughter. The last thing he needs
is the all-too-attractive Stella disrupting the smooth running of his
ranch, especially now that disturbing incidents are happening on his property.

Defending his land against those who want to gut it will be a challenge, but
the biggest threat of all may be to his heart.

Damn it! He should be home in bed instead of driving on this godforsaken, sorry excuse for a road in the middle of the night.

A dark shape darted out of the thick bank of pine trees and sprang onto the road. A pair of eyes glowed in the glare of his approaching headlights.

He cranked hard on the steering wheel, avoiding the deer by inches.

The animal, white tail flashing like a flag, bounded into the ditch and vanished into the forest.
Dawson Wheeler released a breath he hadn’t been aware he was holding and eased his foot off the accelerator. Crashing into a deer or moose wouldn’t make this day any better. He rolled down his window and inhaled the sweet-smelling, rain-washed air. The sky had cleared after the morning’s rain shower, and a thin sliver of moon cast a faint glow over the dark wilderness, the trees silhouetted against the velvety sky. In the distance, a dusting of fresh snow glimmered on the jagged peaks of the Coastal Mountains.

Why had he agreed to this crazy idea? He had enough to do at the ranch without having to babysit some pampered know-it-all, especially with that damn mine business hanging over his head.

He slowed as he approached Spirit Falls. The bus stop was nothing but a widening of the road with an old wooden bench set amidst weeds and wildflowers. Glancing at his wristwatch, he grimaced. Mack Hicken, the cantankerous old bus driver who’d driven the route between Hosten and Spirit Falls for what seemed like forever, prided himself on keeping to his schedule in spite of flat tires, knee-deep snowdrifts, and mud-filled ruts.

The bus would have dropped any passengers off an hour ago, but not a single man-made light broke the darkness. The rain and accompanying high winds had delayed Dawson, but the person he was there to pick up should still be waiting. Where would she go? It wasn’t as if a coffee shop was open down the road, or that she could catch a ride in a passing vehicle.

Traffic was sparse on the old logging road at this time of night. Spirit Falls’ heyday had fizzled with the bust in the lumber market, and most folk had moved on long ago. The town consisted of a few boarded-up buildings and a broken gas pump. Jim Svenson ran a small general store for locals, but Jim’s daughter had just had twins, and the proud grandpa had taken an extended vacation to Hosten to meet his new grandsons.

The woman Dawson had come more than a hundred kilometers to pick up must have taken one glance at the desolate emptiness of Spirit Falls and refused to get off the bus. She was probably on her way back to the bright lights of Hosten right now. If she’d bailed, that meant he was off the hook.

Smiling for the first time that day, he pressed down on the gas pedal and sped away from the bus stop. A flicker of white on the shoulder ahead caught his eye, and he slammed on the brakes. The truck skidded to a stop, his seatbelt digging into his shoulder. Catching his breath, he peered through the mud-spattered windshield.

A woman sat perched atop an oversized suitcase. Long, wavy strands of golden hair glowed in the sweep of light cast by his headlights and formed a halo around a face that wouldn’t be out of place on the cover of a fashion magazine. Her full lips lifted in a tentative smile, and she waved.

He frowned and tugged the photograph of the woman he was supposed to meet from his coat pocket and squinted in the glow of the dash lights. The lined, grandmotherly face beamed at him. He glanced at the gorgeous blonde watching him from the roadside. A sinking feeling settled deep in his gut. He removed his cowboy hat, ran his fingers through his hair, and tossed the hat onto the passenger seat.

Maybe she was waiting for someone else.

Award-winning author, C.B. Clark has written six romantic suspense novels published
by The Wild Rose Press. C.B. has always loved reading, especially
romances, but it wasn’t until she lost her voice for a year that
she considered writing her own romantic suspense stories. She grew up
in Canada’s Northwest Territories and Yukon. Graduating with a
degree in Anthropology and Archaeology, she has worked as an
archaeologist and an educator. She enjoys hiking, canoeing, and
snowshoeing with her husband and dog near her home in the wilderness
of central British Columbia.

The cover is beautiful and a genre I love to read.

Thank you so much for featuring Healing Hearts on your Blog! Your support is awesome.

Thank you, Mary! I love the cover as well. The artist caught the spirit of a western romance.