HEIR OF RA is an action-packed adventure starring a fifteen-year-old girl, Alyssa, who accompanies her father on an archeological dig. When her father becomes ill by a mysterious disease related to opening a tomb (think curse of King Tut combined with Covid-19), she races to save him—and possibly all of humanity. If this premise sounds simple, it’s because you haven’t read HEIR OF RA. 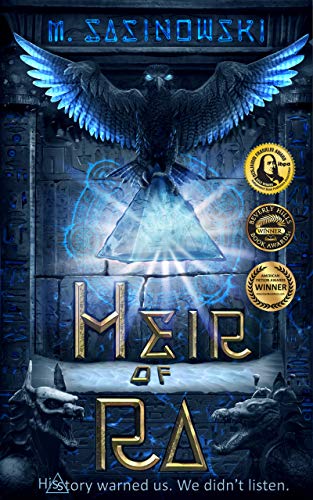 Maciek Sasinowski takes readers on an intrigue-filled journey across Egypt, Peru, England and the US.  At first, I thought the author went off on tangents, but they all come together. The story moves rapidly so readers should pay attention to chapter headings to get their bearing. The author’s apparent understanding of technology, biology, history, and mythology comes through in this fascinating story.

Sasinowski's vivid writing paints word pictures the reader can “see” as he or she reads. The characters are appealing and three-dimensional. I appreciated that his writing includes humor to lighten the action.

The heroine, Alyssa, is based on the author’s daughter. If the real Alyssa is anything like her namesake, she must be both a challenge and a pleasure to keep up with and parent! In HEIR OF RA she doesn’t know who to trust as she fulfills her quest to save her father.  I can see this story as the first of a popular series and even made into a movie.

If you enjoy YA, you will enjoy this story. Books two and three are sure to provide more reading enjoyment.

About the Author - written from the point-of-view of his 15-year old daughter (that's me! J)

Some say that M. Sasinowski writes until 4 am… fueled by a single cup of decaf coffee. Others say this Polish-born American hyper-nerd absorbs energy from late-night TV space shows. No matter the truth… he’s my dad. He will never be cool.

He’s kind of smart, I suppose (he has a physics PhD and an MD, or whatever) and likes to build computers for fun.

His teenage daughter (that’s me! J) is occasionally a handful to deal with and also served as the inspiration for the main character in his debut young adult novel Heir of Ra.

You may recognize him from his glorious hair or his tendency to do the “vacuum cleaner” dance to embarrass his daughter (that’s me…L).

If you ever see this man, approach with care and greet him in a language he understands, like in Klingon or, better yet, in Wookie. Guurrghghgh!


Posted by Caroline Clemmons at 1:30 AM