THE SPA AT LAVENDER LANE 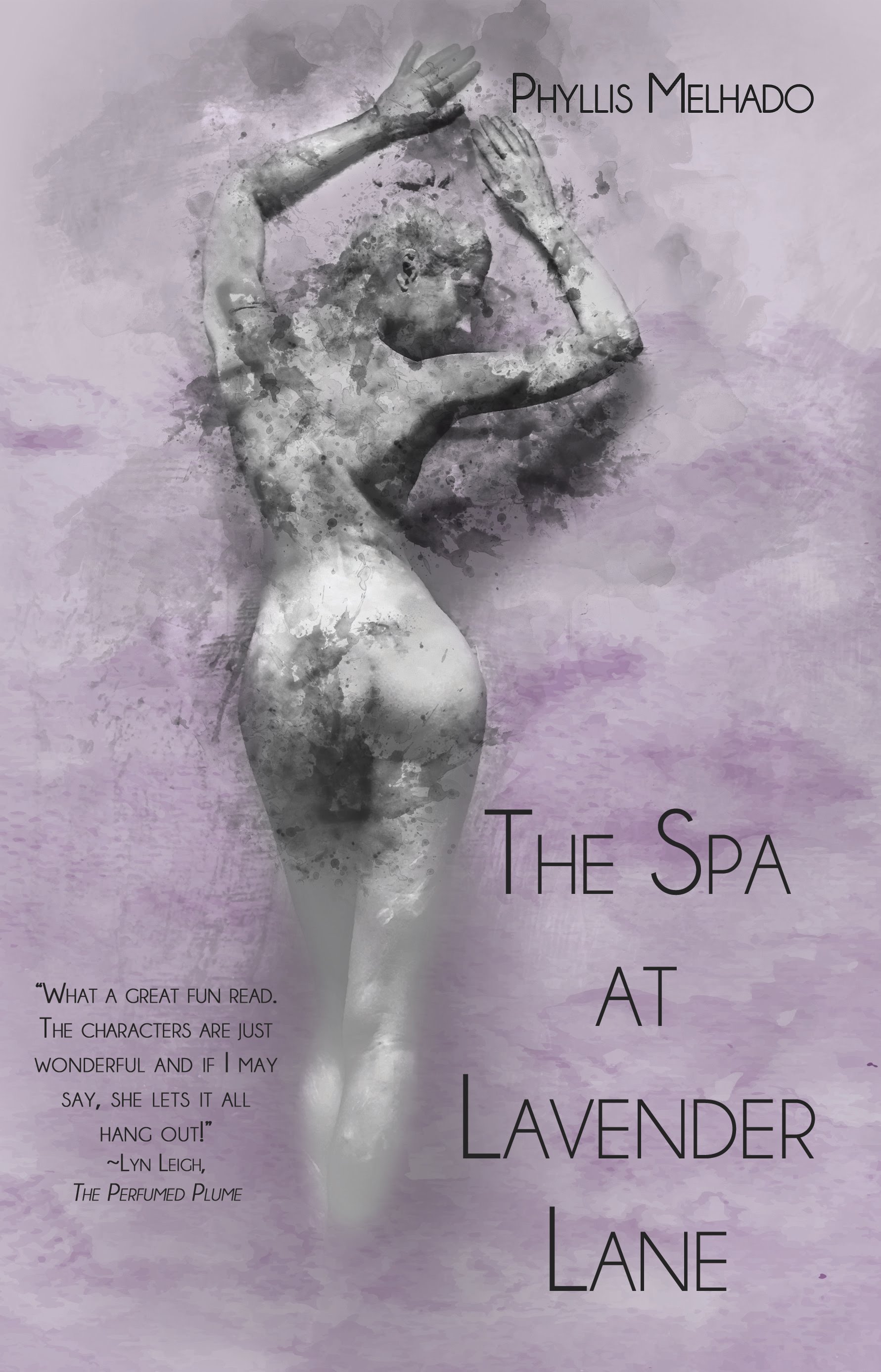 The Spa at Lavender Lane
by
Phyllis Melhado

Take a peek behind the curtain of wealth and glamour in Phyllis Melhado’s sassy and sultry beach read. The guests who arrive for a 10-day stay at the nation’s premier spa at Lavender Lane seem to have
everything a girl could want: high-flying careers, social and financial prowess, access to the top fashions and beauty products, and even a dash of
fame. Yet each woman is in need of rejuvenation from insecurities, flatlined business motivation, or failed relationships – problems that will require more than the spa’s renowned anti-aging quince cream to fix. As the women learn to trust one another, they each figure out how to take a second chance at life, and reclaim what’s most important.

She pushed her sunglasses up into her tousled auburn hair and snapped open her bloodshot hazel eyes, almost sorry the ride was over. The trip from LAX had provided the first pleasant moments in an otherwise horrendous travel day filled with an insane traffic jam on the way to JFK which nearly caused her to miss her flight, a terrible seat at the rear of the plane where the cabin staff were constantly rattling cans and refilling their carts and a raucous group of drag queens on their way to a competition in LA, who didn’t shut up for a minute during the entire five-hour flight. But the capper was the sudden drop in altitude that put her stomach firmly in her mouth and sent her stumbling to the bathroom to make sure that her body had not betrayed her like it had done a few years before. Happily, what she found was just the result of a leaky bladder and not the catastrophe she had dreaded.

“May I help you?” asked the good-looking young man as he opened the car door and offered his hand. He smiled broadly, gleaming white teeth set off by eager blue eyes and deeply tanned skin.

Even though they were miles from the sea, Toni thought he had perfect California surfer looks, complete with thick, wavy blonde hair and a tall, well-built body.

“Did you have a good trip?” he inquired.

“Good trip!” Toni grunted, pushing her glasses back down to shield her eyes from the southern California desert sun. “Do you really want to know?

She leaned back and looked at him for a long moment, then laughed. “Of course you don’t want to know! I’ll spare you.”

There was an audible sigh of relief.

“Oh, thanks. You can dump my stuff over there,” Toni said, pointing to a collection of Gucci, Vuitton and Prada bags waiting to be delivered to the rooms of other newly arrived guests.

“Now, Michael?” she asked, focusing on the name badge pinned to the surfer boy’s neat white Lacoste shirt. “Where to?” She grabbed his arm and gave him one of her most engaging smiles.
Michael smiled politely and tried to usher Toni in through the front door. “They’ll take good care of you at the desk, Ms...”

“Etheridge,” Toni said, taking off her sunglasses, but making no move to walk in.

“We’ve got to get you checked in quickly, Ms. Etheridge. Madame Demidova runs a tight ship.”

“I’ve heard that, Michael,” Toni said, toying with his nametag. I’m sure she depends on you to, uh, keep things moving.” She flashed him a coy smile. “And I certainly don’t want to get you in any kind of trouble.”

There was an awkward pause.

“I would sure appreciate that, Ma’am.”

“Of course not!” Michael said quickly as he encouraged her through the door to reception.

“Ah, Ms. Etheridge,” the front desk clerk said. “Welcome!” But before Toni had a chance to reply, the cell phone buried in her huge tote bag began to ring. Damn, she thought, remembering the rules she had read in Lavender Lane’s confirmation letter: No men, other than staff, allowed on the premises. No loud talking in the public areas. And absolutely no cell phones. She began fumbling in her bag. “Shit!” she said, quite audibly. “Where is the damn thing?”

“Ah,” she heard a voice say softly. “You must be Antoinette Etheridge. We’ve been expecting you.”

Toni looked at the small, impeccably dressed woman who had silently advanced toward her. Clearly Chanel, and definitely the real thing -- and oh-oh. It could only be one person.

“Oh, dear. I am so sorry,” she said sheepishly. Her phone, which had migrated to the bottom of her bag, somewhere between a prickly hairbrush and a plastic bag full of broken pretzel bits, continued to ring. “Guess I forgot to turn the darned thing off.” Gee-sus. Do you believe this? Toni felt her face flower into a full flush. She rummaged around her bag and after two more excruciating rings, finally located the phone and turned it off.

The woman in Chanel stood silently, a patient smile on her face.

“Nothing to be concerned about,” the woman said in a soothing tone. “You’re here, now, and it’s time to leave behind those dreadful little machines and all that New York stress.” She offered her hand. “I'm Nadia Demidova, dear. Welcome to Lavender Lane.” 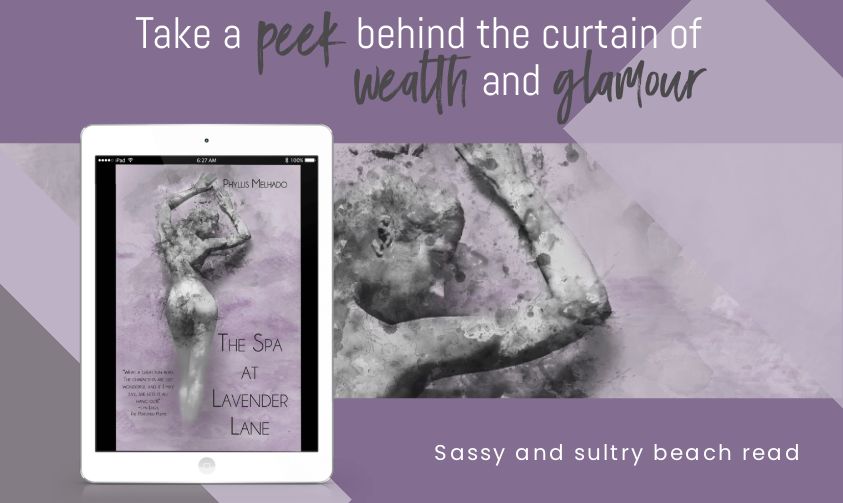 About the Author
The former Vice President of Public Relations for Estee Lauder, Phyllis Melhado has had her work published in Town & Country, Cosmopolitan, and The Scarlet Leaf Review. She has also ghosted a best-selling beauty book as well as a nationally syndicated beauty column. She earned her Master’s degree in Communications from NYU and lives in New York City. The Spa at Lavender Lane is her first novel. To learn more about Phyllis and her work, visit https://www.phyllismelhado.com.

Thank you for hosting!

Lavender Lane seems to be a place where one learns how to relax and leave the world of cell phones and screens behind. I enjoyed reading the rules about no men allowed except staff and figure that she'll soon break them what with flirting with the staff guy who picked her up.