I’m so excited to announce my new release, MAIL-ORDER MORIAH, which is a Brides of Beckham romance and the first of my new Pearson Grove Series. Beta readers have told me this is their favorite of those I’ve written. I hope you’ll read and enjoy this sweet western historical. Here’s the mini-synopsis:

Moriah Singleton faced hardship to get from England to America but met more problems once she arrived. The only apparent honorable solution was to become a mail-order bride in far away Texas. How will she ever save enough to bring her sister to America?

Danger, family entanglements, and disaster await the couple. Will the problems bring them closer or drive them apart?

MAIL-ORDER MORIAH is free on Kindle Unlimited and is available in paperback. 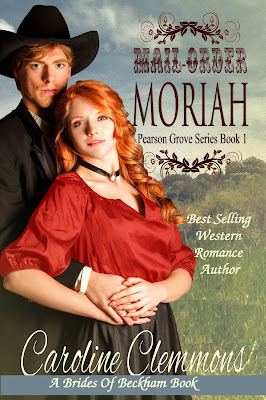 Here’s an excerpt from MAIL-ORDER MORIAH: (they're having dinner after their wedding)
Everyone stared at them, even more than the previous evening. Moriah thought they might as well be specimens on display at a museum. To make things more uncomfortable, Scott didn’t speak and she couldn’t think of anything to say either.
By the time their food arrived, she thought she would explode from tension. “Tomorrow I’d like to mail my parents a letter. Where’s the post office?”
His eyes held a glint of humor. “The store is the post office. I’ll give you a tour when we get home.”
“That will be helpful.”
“Do they know you’ve come west to be married?”
“I sent them a letter the evening before I left Massachusetts. In case they’d mailed me one before it reached them, I left postage, an envelope, and your address with my landlady at the boarding house where I stayed. She promised to forward my mail here.”
“You said you’re from Kent, but I don’t know how far that is from London.”
“The village where my family lives is about thirty miles south of London. My father grows hops. Where is your home?”
“If you mean my parents’ home, it’s about a hundred and fifty miles south-southwest near the Brazos River in McLennan County. My older brother helps our father farm.”
“Do they know you sent for a mail-order bride?”
Scott shifted on his chair. “I’d give anything if I hadn’t written them I was engaged. Now I don’t know how to explain what’s happened.”
His attitude annoyed her. “How hard could it be, Scott? You just write them and tell them the facts. Are they likely to visit?”
He rested his wrists on each side of his plate. “They plan to now that cold weather is here. Hard to leave the farm most of the year.”
“Don’t you think you should warn them?”
He toyed with his fork. “I thought maybe you could write them and explain.”
“Me? Is it a coward I’ve married? Are you afraid to tell your family the truth of your situation?”
He held up his hand. “No, that’s not the problem. My older brother Sean is always lording it over me about how much better he is at everything than I am. He’s one of the reasons I chose to buy a business away from where my folks live. Sean will lap up the news that I sent for a mail-order bride like it’s a gift from heaven.”
His eyes widened. “Not that there’s anything wrong with a mail-order bride, mind you. That’s not what I’m saying.”
She spoke very quietly. “Exactly what are you saying, Mr. Ferguson?” Her facial muscles ached from keeping a pleasant expression when she wanted to toss her coffee in his face and storm off.
“Look, all I’m saying is… well, you see… I might have bragged about my fiancée being from the wealthiest family in town and how she’d chosen me even though there were other eligible bachelors here.”
She met his gaze and arched an eyebrow. “And now you have to eat humble pie and it’s not going to taste good, is it?”
“You’re right. I don’t know how to go about wording the letter. I don’t want to seem ungentlemanly toward either you or Alexandra. I can’t explain why she broke the engagement without putting her in a bad light.”
“And you’re ashamed to admit to your family you have a mail-order bride.”
“No, no, I’m not ashamed of you or sending for you. All right, I admit I’m embarrassed in light of the bragging I did, but there’s nothing wrong with my having sent for you or your having come.”
She offered her sweetest smile. “I’m glad you feel that way, dear husband. When we get back to our rooms, we can both write letters to our parents. I’ll let you read mine. Do you dare let me read yours?”
Muscles clenched in his jaw. “You have a bargain, Mrs. Ferguson.” He scooped up the last bite of his apple pie then dabbed his mouth with the napkin.
She took her time dawdling over her dessert, more to annoy him than for any other reason. He was one of the best looking men she’d ever met and he had manners outwardly. Inside, she was afraid he had no spine. He’d soon learn she meant what she said.

Do you read seasonal stories year round or only at a particular holiday? I read them all year, especially Christmas books. I didn’t write a Christmas story this year because I had too many other projects going. I have three from past years, though. If you haven’t read them yet, please do! Each is a fun read and the last two are heartwarming as well. 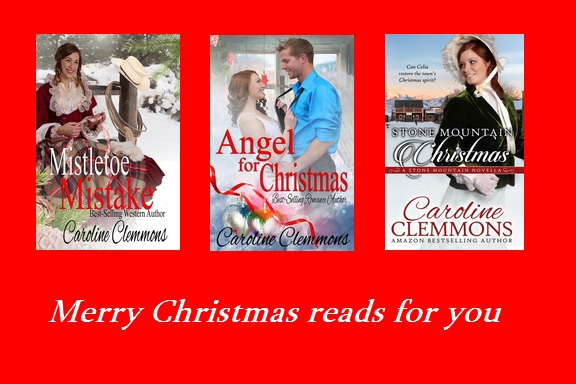 Here are the mini-synopses and buy links:

MISTLETOE MISTAKE is a humorous historical novella in which Riley McCallister, a Montana sheriff contracts for a doctor by mail. The doctor who'd passed away was a mentor and close friend and Riley hopes to find the same camaraderie in the new one. When the doctor arrives, he turns out to be she, Shannon Callahan. This Old West sheriff feels women are supposed to tend the home and raise the children. Seeing his struggle to accept this woman doctor is fun. Unfortunately, Shannon is used to being criticized for her role in what is often viewed as a man’s profession. She proves herself to be an excellent doctor but is this enough to win the town’s respect?

ANGEL FOR CHRISTMAS is a contemporary story about Jacob, a dot.com billionaire who crashes his fancy sports car and meets St. Peter and St. Michael for a last chance assignment on earth. Help Susan Stephens save her family’s orphanage by Christmas Eve… or else. Many fans have told me this should be a Hallmark movie. Wouldn’t that be lovely? Sigh.

STONE MOUNTAIN CHRISTMAS is part of the Stone Mountain, Texas series. Christmas has been Celia Dubois’s favorite time of year as long as she can remember. When she moves back with her parents a year after the death of her husband, the young widow is appalled at the town’s lack of Christmas spirit. Two months earlier, banditos had burned the church and crushed the townspeople’s strength of mind. Celia vows to return holiday joy to the town. Perhaps doing so might help mend her aching heart. Eduardo Montoya is determined to do whatever he must to capture Celia’s love.

If you're kind enough to read and enjoy one of these books, please leave a review on Amazon.
Posted by Caroline Clemmons at 1:30 AM