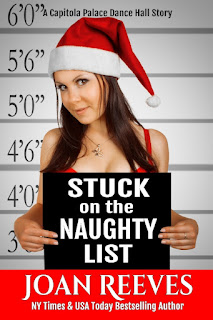 Cassie arrives home for the holidays. Before she has time to succumb to a severe case of the holiday blues, she’s arrested and taken to jail!

A year ago, Cassie left Ben, the man she loved, so he could have the life he’d been groomed for since birth. Still heartbroken over the break up with Ben—even though it was for his own good—she returns to Capitola, Texas, her small hometown, for Christmas. She hopes the warmth of old friends and family will take away the pain of heartbreak. She just wants the comfort of her grandmother's home where she grew up to help her get through the lonely holidays.

Instead, she’s arrested on a trumped-up charge and taken downtown to the police station to be charged, fingerprinted, photographed, and booked. That's where she meets the town's new Chief of Police. Could he be the perfect man to mend her broken heart?

THE GHOST TOWN OF CAPITOLA

Stuck on the Naughty List is set in Capitola, Texas, a town that no longer exists. Like many of the more than 1,000 ghost towns, Capitola, located in Mason County which is part of the Texas Hill Country, boomed briefly and then faded away.

This was the 3rd book I’ve set in a town that was once a real town and is now just a memory.

Capitola intrigued me from the moment I read about it because it was founded by a woman—and not just any woman, but an avid reader.

Sarah E. Jenkins, the postmistress, founded the community in 1894. She loved to read and named the town after the heroine in a popular novel of that era: The Hidden Hand, or, Capitola the Madcap by American author E.D.E.N. Southworth. (That’s Emma Dorothy Eliza Nevitte Southworth.)

The little community failed to thrive, and the post office closed its doors a dozen years later. Then the route of the main road was altered, and the town faded away. However, it was the perfect inspiration for me to create a series with a western swing dance hall, the Capitola Palace Dance Hall, as the center of the social life in the town and surrounding counties which was really the case several years ago. In fact, there are still a few dance halls scattered throughout rural Texas.

All she wanted was a good night’s sleep in her own bed, in her own room, in Granny’s house. Was that too much to ask?

Cassie Johnson shivered so hard her teeth clattered together. She rubbed her bare arms to try to bring some warmth to her skin as she walked to the front of the house. Another of the motion-activated security lights came on, spotlighting her in the darkness. Cassie glanced across the road, hoping old Mr. Cotton hadn’t seen her. He still had hard feelings over his yard being toilet-papered when she was in high school. Not that it was her fault. It was that bully Alfie Felder and his football buddies who’d mistaken Mr. Cotton’s house for Granny’s.

All was dark across the road. Thank heavens for small mercies.

When she reached the front of the house, she stopped at the first window. At least the security light under the eaves helped her see what she was doing. Her skin was a landscape of chill bumps. If she didn’t freeze to death, it would be a miracle.

Please let this window be unlocked.

She prayed like she hadn’t prayed since she was thirteen and had been caught kissing Kenny Tamez behind the school gym. Back then, she’d prayed the principal wouldn’t call her grandmother. Now she prayed for an unlocked window. She used the garden spade she’d found in a flower pot on the back porch and wedged the metal end of it between the screen and the window sill. Suddenly, the screen popped out of the frame, hitting her, and scratching her arm as it dropped. Muttering about the unfairness of…well, everything in her life, Cassie noticed a half-inch of space between the bottom of the window and the frame. Her mood brightened. She slipped the spade into the gap and tried to pry the window up. Nothing moved. She leaned all her weight on the spade’s handle. She hopped up and down, trying to torque the window up. The window groaned—then the spade bent in half and broke off the handle. Cassie involuntarily lunged forward but managed to catch herself before she crashed head first into the window.

The blue norther that threatened to freeze her into an icicle wasn’t nearly as blue as the curse words that escaped her mouth. This wasn’t the way her December was supposed to begin. She’d come home to Capitola to see her hometown decked out like a Hallmark movie set and to smell the pine and cedar boughs. She wanted to drink hot spiced cider, eat fruitcake, go caroling every weekend, and attend church on Sundays. She wanted to sing and dance at the Palace every night.

Instead, she’d somehow managed to get herself locked out of the house. Now she was freezing her butt off in the first winter storm blowing through the hills surrounding the town.

Cassie rolled her eyes skyward—and was rewarded with a snowflake landing on her right eyeball. “Oww!” The gusting wind caught her gasp of pain. She blinked rapidly. Could you get frostbite of the eyeball? Another wave of shivering racked her body. Time was running out. Maybe she should have gone to Mr. Cotton’s house as soon as she’d realized she was locked out, but, dressed—or rather undressed—as she was, she hadn’t wanted the old man to see her. He was the worst gossip in town. By breakfast tomorrow, everyone would have known she’d been locked out wearing nothing but her bra, jeans, and house slippers.

There was another option. She hated the thought of breaking one of the hundred-year-old windows, but desperate times called for desperate measures. Granny wouldn’t want her to freeze to death. She’d forgive her. Break a window or go to Mr. Cotton’s?

Her breath caught. The two words slipped beneath her radar, and thoughts of Ben filled her mind.

The hotel room was dark. Cassie wanted no lights because it was easier to hide what she planned to do. Her heart literally ached. This was the last night she’d ever spend with Ben. She wanted to remember every detail, embed every sensation in her memory. Then she’d leave him. His mother had made it perfectly clear that she was an anvil around Ben’s neck. If he married her, Cassie would prevent him from having the life he was meant to live.

Ben’s hands stroked over her shoulders and glided down to the zipper of the red satin dress she’d worn to the party celebrating his passing the bar exam. “You were the most beautiful woman at the party,” he whispered.

The soft buzz of the zipper was loud in the quiet room. He pushed her dress off her shoulders.

“Are you sure?” Cassie was proud that her voice was steady. She was helpless to resist his touch.

“No contest,” Ben whispered, turning her to face him.

Absently, Cassie pressed the gold butterfly on the chain around her neck. The metal felt warm against her chilled skin. Touching it intensified her longing for Ben. Even though a year had passed, losing him was still like a knife blade plunged into her heart.

Stop it. Just stop it.

Thinking about Ben wouldn’t help her solve the problem at hand. She took a deep breath. The cold air burned into her lungs. She had two choices. Well, there was a third, but quietly freezing to death didn’t hold much appeal. The tips of her shaking fingers held a distinctive bluish cast. “Global warming, my ass,” she grumbled.

Going to Mr. Cotton’s house was out of the question. That left the second option. Cassie started looking for a rock. She found a chunk of limestone the size of her fist beneath one of the boxwood shrubs and picked it up, hefting it. It should be big and hard enough to break one of the thick panes in the antique window.

A flash of light drew her attention to the road. A car was coming. She saw headlights first as the car topped the hill near the house.

Flashing blue and red lights washed over the front yard. A police car whipped into the driveway. Like a cheesy horror flick, Cassie stood rooted to the spot. A loud electronic warbling blasted through the night air. Cassie prayed again. For invisibility. Frantically, she looked around for a place to hide. A high beam spotlight hit her. She froze. Her eyes narrowed against the sudden brightness. The electronic click of a loudspeaker made her flinch. “Walk toward me with your hands up.”

Double crap. She recognized that voice. It was Alfie Felder. Could her life get any worse? 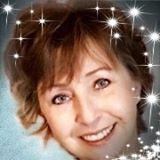 Joan Reeves is a NY Times and USA Today bestselling author of Contemporary Romance. All of her stories have the same premise: “It’s never too late to live happily ever after.”

Joan lives her happily-ever-after with her hero, her husband. They divide their time between a book-cluttered home in Houston and a quiet house at the foot of the Texas Hill Country where they sit on the porch at night, look at the star-studded sky, and listen to the coyotes howl.

Be the first to know about New Books, Giveaways, and Bargains by signing up for Joan’s Free Newsletter. When you confirm your subscription, you’ll receive a free romance ebook.