When I was growing up, my dad told me stories about his family in Texas. He was from a family of one girl and seven boys—and what a rowdy bunch of boys they were (poor girl!). When he was eight, he moved from a rural area to the town of Denison, Texas so he could attend a good school. That town is the county seat of Grayson County and an important stop on the Missouri-Kansas-Texas Railway, known as the Katy. I’ve visited Denison several times due to my curiosity about what my dad might have seen.

No one knew where my father’s mother was buried. Darling Daughter Number 1, my brother, and I located the cemetery in which my grandmother is buried. Unfortunately, hers was one of many that had a wooden marker. All that’s left of those markers is a stob. (If you’re not from Texas or a rural area, you may not know that a stob is a piece of wood sticking up from the ground. Used in a sentence: I tripped on that stob.)

As the site for my Pearson Grove Series, I chose the area in which my dad was a boy. His first name was Pearson, which is the reason for the series name. He was always supportive of my writing. Sadly, he’s passed away, but I think he’s looking on and smiling that I named the series after him. 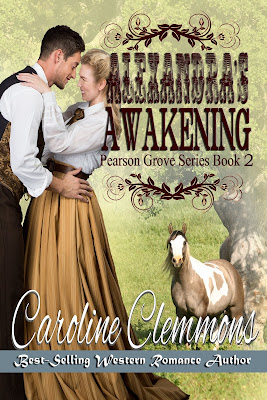 Book 2 of the Pearson Grove series, ALEXANDRA’S AWAKENING, is released today! In book one, MAIL-ORDER MORIAH, Alexandra was not likeable. She was snobby and spiteful, but let’s give the girl a chance, all right?

She gets into trouble a couple of times but she also comes to the rescue when needed. ALEXANDRA'S AWAKENING is a sweet western historical. This is a fun book and I hope you'll read and enjoy it.

A wealthy woman forced to change; a heroic sheriff standing his ground; the danger that unites them…

Alexandra Novak has been raised in wealth and is used to having whatever she wishes. Her parents have spoiled her and she’d begun to believe it her right. A fire that destroys her family home and almost costs her mother’s life starts Alexandra rethinking her values. When her father’s revelation shatters her world, she is determined to do whatever necessary to make her father happy—even if it means being nice to that girl he’s brought into their home.

Virgil Witt is the best sheriff Pearson Grove has had. Under his leadership, crime is at an all-time low. He has reconciled himself to the fact that he is destined to live alone except for his dog. Maybe that’s best since his job is a dangerous one. He can’t understand why Alexandra chases him, especially not after he’s explained he has no money.

When danger strikes the Novak family, can Virgil solve the problem in time? Can Alexandra convince Virgil she has changed? Can the two of them work together or will her need for the best resurface?

The Universal Amazon buy link is http://mybook.to/Pearson The book is also available in print and is free in KU.

This is a stand-alone book but I’d love for you to read the first one if you haven’t already done so. The Universal Amazon buy link for MAIL-ORDER MORIAH is http://getbook.at/MORIAH.

You still have a few days to enter Connie Bretes’ April Showers Romance E-Book Giveaway at the top of this blog. If you click the image you will be taken to the Rafflecopter to enter the giveaway. You'll notice in the graphic that MONK'S BRIDE is part of the giveaway.

Posted by Caroline Clemmons at 8:03 AM