After I came up with the plot for Matty’s story in HAZARDOUS UNIONS I needed to understand what type of woman she was. Alison and I had done a background on the girl’s family, so I knew she’d grown up educated by her father, a schoolmaster.

I chose to add a bit of lightness to the story because it took place during one of the bloodiest wars in history. Pushed into the serving life, Matty sent all her income home to help her mother tend to her ailing brother. The only form of entertainment was reading. She kept the books her father had given her, and read them multiple times.
Questions surfaced in my mind. What if she loved it so much she often quoted the books causing her to look silly? I used the education she received and created a woman who was a dreamer, and at times sounded a bit crazy while citing William Shakespeare, or Edgar Allen Poe.

For my research I read Edgar Allan Poe’s The Raven, and William Shakespeare’s Hamlet along with some of their other works, and to my surprise I enjoyed them. I knew about both authors and I’d read a few of their pieces in my teens, but I never delved into them as I did while researching for Matty’s story. I must admit I have a new love for literature much like Matty’s, minus the quoting.

After the death of their father, twin sisters Maggie and Matty Becker are forced to take positions with officers’ families at a nearby fort. When the southern states secede, the twins are separated, and they find themselves on opposite sides of America’s bloodiest war.

In the south, Maggie travels with the Hamilton’s to Bellevue, a plantation in west Tennessee. When Major Hamilton is captured, it is up to Maggie to hold things together and deal with the Union cavalry troop that winters at Bellevue. Racism, politics and a matchmaking stepmother test Maggie’s resourcefulness as she fights for Bellevue, a wounded Confederate officer and the affections of the Union commander.

In the north, Matty discovers an incriminating letter in General Worthington’s office, and soon she is on the run. With no one to turn to for help, she drugs the wealthy Colonel Cole Black and marries him, in hopes of getting the letter to his father, the governor of Michigan. But Cole is not happy about being married, and Matty’s life becomes all about survival. 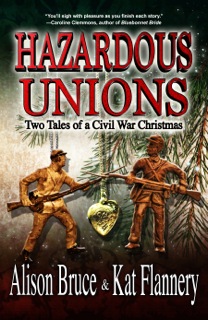 What had she done? Matty Becker was going to hell, and there'd be no one to save her. A loud snore echoed from the other room. She peeked around the corner and caught a glimpse of Colonel Black's stocking feet. She'd burn for sure. She glanced at the paper she held and groaned. She was a horrible, devious, scheming letch. Maggie wouldn't be pleased. Maggie wasn't here. Another snore blew into the kitchen and she placed her head onto the table banging her forehead twice. There was no turning back now.
Last night she'd pushed aside her conscience and let fear guide her. For her plan to work, she'd have to throw all sense to the dogs, not that she hadn't done so already by following through with the blasted thing. She couldn't fail now. If her family found out what she'd done they'd never forgive her. Worse yet, if Colonel Black found out she'd be locked behind bars, a fate far better than the one that got her in this mess to begin with.
She placed the paper on the table and went into the bedroom. Colonel Black lay on the bed with his clothes stripped off and tossed about the floor. He'd been out for nine hours and would wake any minute. Matty stood, pushed all thoughts of reason from her mind and removed her dress, corset and pantaloons. Her face heated and the room spun. He rolled over and she jumped into the bed next to him, pretending to sleep. She knew the moment he'd woken. The bed stilled and she couldn't breathe the air was so stiff.
"What the hell?" He sat up and she knew the instant he saw her. "Son of a bitch."
She felt his nudge once, twice and now a shove almost knocking her from the bed.
"Wake the hell up," he growled.
She squeezed her eyes closed and willed strength into her soul so she could face the dark Colonel. She rolled over pretending to wipe the sleep from her eyes.
"Who are you?" He placed his head in his hands. She'd bet he had one heck of a headache.
"Your wife," she said.
"The hell you are." He shot out of bed without grabbing the sheet, and she averted her eyes.
"Please cover yourself." She held up the sheet and he ripped it from her hand. "The marriage license is in the kitchen on the table if you do not believe me."
She watched as he grabbed his head and closed his eyes. The heavy dose of laudanum she'd placed in his drink the night before had done the trick and it wasn't but a mere suggestion they marry that the Colonel jumped to the challenge. Soon they were standing in the dining room in front of a preacher. Words were spoken—words she thought to say with someone she loved, someone who'd wanted her. Her stomach lurched and her mouth watered with the urge to vomit.
"How did this happen?" he asked sitting on the end of the bed.
"Mrs. Worthington sent me to see if you needed anything."
"I was drinking." He looked at her. "I was drunk."
She shrugged.
He stood holding the sheet tight to his midsection.
She couldn't help but notice the rippled stomach and defined muscles on his chest.
"We can annul. I had too much to drink. My head wasn't clear."
She shook her head.
He frowned.
"We have consummated." A lie of course but she was desperate.
His mouth fell open. A moment she knew he'd not remember. After the preacher left, she'd taken him to the bedroom where he passed out before hitting the bed.
"Impossible. I'd remember that."
She shook her head again praying he'd buy the fib.
He pulled on his pants and dress shirt. "I don't even know you. Why in hell would I marry you?"
"My name is Matty Beck—Black. I was employed with the Worthington's. You've come to dinner several times."
His brown eyes lit with recognition. "You're the house maid."
"Yes."
"I married a maid?"
The words stung and she turned from him so he wouldn't see the disappointment upon her face.
"Why would you marry me if I was into the spirits?"
"You seemed fine to me."
He took a step toward her. "Why would you marry me at all when you don't even know me?"
She gripped the blanket on the bed. "You…you said kind words, and I…I believed them.
"How desperate are you to marry a stranger?" he yelled. "You found out who my father is. You want money. You tricked me."
Well, he got the last one right, but the first two irritated her. She was not the kind of person to marry for money. Really, who did he think she was?
"Sorry to disappoint you but I refused my inheritance years ago."
"If you mean to say that I could not find myself a suitable husband because I am a maid, then you're wrong."
"That is exactly what I am saying Miss—"
"Black."
"The hell it is."
He went into the kitchen picked up the marriage license and stared at it.
Matty dressed quickly and inched into the room. Confusion pulled at his features and she began to feel sorry for him. This was her fault. She'd planned this. Now she had to continue telling the lie she'd told. She glanced outside and shivered. Boldness, be my tongue. Shakespeare's words echoed in her mind. It was worth it. She'd been living in fear for a week. Colonel Black had been her saviour, and she risked a life full of love and happiness for this—a lie in which she'd speak for the rest of her life. She swallowed back the lump in her throat and willed the tears not to fall.
"Why can't I remember?" He glanced at her. "And why in hell would I marry you?"

Kat Flannery’s love of history shows in the novels she writes. She is an avid reader of historical, suspense, paranormal, and romance. When not researching for her next book, Kat can be found running her three sons to hockey and lacrosse. She’s been published in numerous periodicals. This is Kat’s third book and she is hard at work on her next.

I'm glad you don't go around quoting Poe like Matty does, Kat. We writers are considered crazy enough.
;)