W. LYNN CHANTALE SHARES A PEEK AT FOREVER AND TOMORROW

Embittered by divorce, Dexter Carson resolves to live without love or family. When he arrives at a job site, the last thing he anticipates is his instant attraction to the ebony-haired client. But work comes first, and he's determined to maintain a professional distance, no matter how his body reacts to her soft scent and feminine curves.

Beautiful, intelligent, Molly Crosby, always doubted a man would love her, and now that she's forced to care for her infant niece, all hope seems lost. But when she meets Dexter the rugged contractor, she longs to discover what's behind his solemn demeanor, especially when he rewards her with a devastating smile.

When a bombshell threatens the tender relationship that’s been fostered, will Molly's love be enough to overcome the mistakes of the past, or will Dexter walk away on his only chance at love and family? 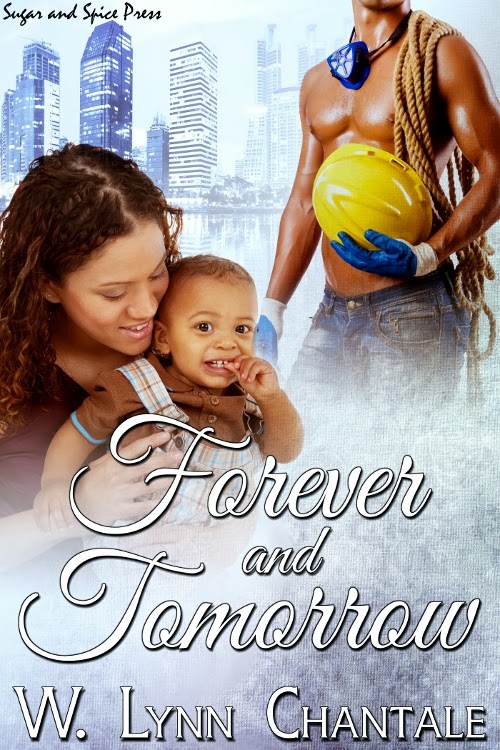 She’d locked the door, something he advised all his clients to do until they felt comfortable enough. Dexter knocked again.

A faint, “coming,” drifted through the door along with the quick shuffle of feet. A moment later the lock scraped back and the door flung open.

His breath caught in his throat. Soft, tousled curls framed her face, giving her the allure of some sensual pin-up girl. Genuine delight lit her light brown eyes as her full, pouty lips were parted in greeting. He couldn’t stop himself. His body moved on its own volition and he found his mouth on hers. She curled her fingers in his shirt as he dragged her closer, molding her voluptuous curves to his lean, hard frame.

She opened for him, receiving his kiss as if she’d been waiting for it all day. He drifted a hand down the curve of her spine until he grabbed a handful of her luscious rear. Her arms tightened around his neck as he lifted her slightly, settling in the vee of her thighs. He tangled his other hand in her hair, drawing her head back to give him better access to her mouth.

She tasted like a promise whispered on a moonlit night. He deepened the kiss, savoring her unique flavor, allowing it to roll across his tongue and take root where he’d never be able to remove her. She made a small noise in the back of her throat as she seemed to press her lithe body even closer, grinding against his arousal. Lightning arced from his erection, through his veins. Abruptly he pushed her away.

“I—oh God!” He dragged a hand across his head, dislodging his cap. It fluttered to the floor with a quiet thud.

Molly clutched the counter behind her, her eyes a little unfocused. Dexter took in her dazed appearance, kiss swollen lips, and wanted to gather her in his arms again. A siren’s smile curved that sensuous mouth and he longed to sample her sweetness again.

“I haven’t been kissed like that since high school graduation,” she murmured.

The silken rasp of her voice danced over him, making him long for a whole heart and an eternity to explore this sizzling attraction. But his heart wasn’t whole and he’d totally lost his head. With a client at that. When she extended her hand, he stumbled back.

“It’s Molly, especially if you’re going to kiss me like that.” Humor filled her eyes. She stepped forward and he put more distance between them. “Dexter, please sit.” Another step. He shook his head, but stayed put.

`“I enjoyed the kiss and I’m glad it happened.”

Surprise coursed through him and must have shown on his face. Her smile widened. “But…”

She stood in front of him and gently twined her fingers with his. He looked down at the way their hands fit together. They felt right. He dragged his thumb against the smoothness of her skin, reveling in the satiny softness. She’d felt so good when he held her. He stifled a groan and tried to pull away, but she retained his hand.

“Dexter, I know you may think this is forward of me. But I want to get to know you. I felt something the first time I saw you.”

He could only stare and shake his head.

She moved closer, her breasts brushing his chest. “Maybe not now, but in time.” She palmed his cheek. “All
I’m asking for is for you to give a little. I’m willing to wait.”

`The hopeful note in her voice touched a need deep inside, where he forced all his dreams and desires. He studied her a long moment. She was being open and honest with him and where most women would’ve slapped his face, she’d embraced the kiss, offering to get to know him better. He didn’t have the right to make her wait for something that would never happen. “Molly…”

Thank you so much for hosting me. You have a beautiful blog!