Please welcome fellow Texas resident Carolyn Rae to the blog. Carolyn has granted an interview, so I’ll get right to grilling…er, I mean, interviewing her.

CC: Please share with readers something of growing up:

CR: I grew up in Washington, D.C. with one brother. I walked to the library a lot and read every fairy tale I could find, including The Princess and Curdie, but never found The Lion, the Witch and the Wardrobe or any of Tolkien’s books until I had children. I read The Hobbit to them on a long trip from , , where I live now, to visit in-laws in . I guess my library branch didn’t have a large selection. After my mother died, my father remarried, and I gained two sisters and another brother. I used to entertain my youngest sister with stories I made up on long trips.

CC: Who are your favorite authors and favorite genres?

CR: “Courage and perseverance have a magical talisman, before which difficulties disappear and obstacles vanish into air.” U.S. President John Quincy . I also like “You haven’t failed until you quit.” Marjorie Holmes.

CC: I love both of those quotes. How long have you been writing?

CR: Over twenty years. I also wrote the text and some of the recipes for There IS Life After Lettuce (Eakin Press), a cookbook for heart patients and diabetics.

CC: Where do you prefer to write? Do you need quiet, music, solitude?

CR: I like quiet. Sometimes I play CD’s with Lloyd Webber songs sung by Sarah Brightman, especially “Love Changes Everything” and “The Music of the Night” from Phantom of the Opera or Gershwin’s Rapsody in Blue.

CC: I listen to classical music when I write. Are you a plotter or a panzer?

CR: I’m a plotter. If I don’t have a plan, I don’t know what to write next. If I start pantzing, I go off in wild tangents that haven’t much to do with my original story.

CC: I remember that you and I attended the same “Story Magic” workshop led by Robin Perini and Laura Baker. That workshop was immeasurably helpful to my plotting. Do you use real events or persons in your stories or as an inspiration for stories?

CR: Once I used an interesting guy I’d met as inspiration for a hero. My character soon grew into someone different.

CC: Do you set daily writing goals? Word count? Number of chapters? Do you get a chance to write every day?

CR: I write two to three hours everyday, well, Monday to Friday, now that I’m retired. When I worked full time at a day job, I’d write an hour each morning and one to two or three hours on weekends. I could do a book in a year. My critique groups sometimes slow me down when they find things I need to change.

CC: What do you hope your writing brings to readers?

CR: I hope they enjoy the journey and cheer when the hero and heroine escape the bad guys, get proof enough to convict them, and work through  their issues so they can be happy together,.

CC: What long-term plans do you have for your career?

CR: I hope to publish books with traditional publishers and self-publish several novels I’ve finished, including a trilogy featuring people in the Witness Security Program, a time travel, and a series featuring twins. I may also self-publish a cookbook featuring healthy, tasty dishes as cookbook agents haven’t been interested so far.

CC: I’m a confirmed self-publisher now, but wish you success. Would you like to tell us what you’re working on now?

CR: Watch for Romancing the Doctor, the latest romance from Carolyn Rae. Megan and Josh (Romancing the Gold) are now married and have enjoyed traveling for photo shoots in and the during summers off while Josh earned his doctorate at .

When Josh accepts a professorship at Southern Methodist University in Dallas, Megan leaves her job at the Smithsonian to work at the city’s New Municipal Museum.

Returning with presents from a trip to Kenya, newly pregnant Megan shows up on Heather’s doorstep to find her sister is in trouble again. Recently divorced, Heather has adopted a puppy, is being pestered by her ex and courted by brilliant CDC doctor, Daniel Whistler. But Heather’s also a reporter and is about to be thrown into the middle of the biggest nightmare of the century. Someone is spreading a mutated virus in big cities, a cruise ship and elsewhere. It causes death, miscarriages and sterility.

CC: Sounds intriguing. What advice would you give to unpublished authors?

CR: Write every day. Learn all you can. Join a local writer’s group and become part of a small critique group. Research agents and editors before submitting so you can find ones who would be interested in what you write. Read the first three chapters out loud and run it through a spelling and grammar program before sending.

CR: I used to teach in the Fort Worth Federal Correctional Institution. I was the supervisor of the ironwork, carpentry, and painting trainees for their tests and assignments. They spent half a day with me and half a day in shop with instructors who’d worked at those careers.  I even learned how to do welding from an Apache chief who was an inmate there.

CC: How fascinating. We’ve been acquainted twenty years and I didn’t know that about you. All this time, I thought you always worked as a legal secretary. What’s something about you that would surprise or shock readers?

CR: When I had to do an experiment with the liver of a laboratory rat, it smelled so good, I had to taste it.

CC: Euwwww! Excuse me while I go brush my teeth and use Listerine. Can you give readers a blurb about ROMANING THE GOLD?

CR: Here you are:

Megan McKinley finds searching for gold fascinating when she meets attractive photographer Joseph Logan. However, he has a secret agenda, to discover who’s smuggling Peruvian artifacts.
This fall, you can follow Megan McKinley as she rediscovers the teacher she had a crush on as a studly, bearded photographer. Then she finds out that’s not the real reason he’s there, and that he suspects her of wrong doing. 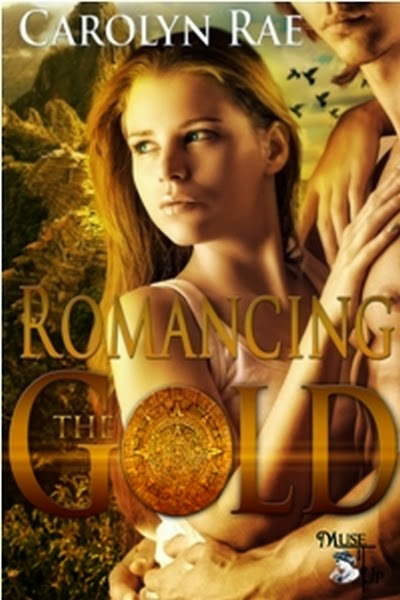 CC: Beautiful cover. How about an excerpt from ROMANCING THE GOLD?

Megan McKinley basked in the warm sun. Here she was, sitting beside her friend, Paula, on a hard wooden board, on her way to , in a donkey cart of all things. She took a deep breath of the clear, fresh air. She’d waited all year to take part in this archaeological expedition, and she’d already made a great find.
Noise from behind made her look back. A red car was creeping along beside them. A hulking man stepped out of the car.
“Hand over your purses,” he barked.
Megan’s stomach lurched. She couldn’t hand him her bag. Her debit card would allow access to the money she’d scrimped and saved to finish her master’s degree. Why the hell hadn’t she put it in her money belt? Now, she wished they hadn’t missed the archaeology camp’s van leaving for town. Her degree and this expedition were supposed to cinch that job at the Smithsonian. Ever since her parents took her to the museum as a child, Megan wanted to spend days and days there. She’d hoped she might soon have that chance, but now….
The driver cracked his whip and gave a command. The donkey brayed as the cart jerked forward. Every bump jarred her, while overworked muscles complained with twinges and aches from digging for artifacts.
The man with the bulging biceps continued to walk beside them.
“Stop!” he commanded, but their teenaged driver refused to comply.
Cropped, curly hair framed the stocky man’s brown-skinned face as he puffed on a cigarette. The acrid smoke set her nostrils quivering. The gun in his hand, although only palm-size, made her tremble. The dark-skinned car-driver, leaner, but just as mean looking, continued to keep pace with the donkey cart.
The man on foot pointed the gun directly at Megan. His eyes narrowed.
“Give me your purses,” he bellowed and motioned with his free hand.
Eagles collided in Megan’s stomach. A bead of sweat trickled down her neck. Her fingers tensed and her insides twisted even tighter. Staring at the barrel of the gun, she caught her breath. Dust from the dirt road swirled around, making it hard to breathe.
CC: An intriguing excerpt sure to get readers’ attention. Where can readers find your books?

This book currently is available at MuseItUp Publishing but also at
http://www.amazon.com/Romancing-Gold-Carolyn-Rae-ebook/dp/B00MVBS9UE/ref=sr_1_fkmr0_1?s=digital-text&ie=UTF8&qid=1409020490&sr=1-1-fkmr0&keywords=Romancing+the+Stone+museitup

CC: How can readers learn more about you?

CC: Is there anything else you’d like readers to know about you?

CR: I’ve given talks at libraries, bookstores, a diabetic education group, writer’s groups, and conferences. If your group is interested in a talk about “Finding Time for Your Dream,” “Luring Readers into Living Your Story,” (talks I’ve given at writer’s groups and conferences]) or  “Plotting Made Easy with Post-It Notes,” contact me at carolynrwilliamson@att.net .
Posted by Caroline Clemmons at 1:30 AM

Hi Carolyn! Loved the interview! It's always fun to learn something new about someone I thought I knew. :) Congrats big time on the release! Love the cover and it sounds like a winner! Best wishes for many, many sales!!!

Great interview, ladies! I enjoyed learning more about you, Carolyn. You've certainly led an interesting life. I have to agree with Caroline about the rat, though. Ick! ;-)

Awesome interview! That rat liver story will be stuck in my mind forever. :)