If you’re like me, you're already eager for the days from Thanksgiving up to Christmas Eve. That’s my favorite time of year. I love the decorations, the songs, the anticipation associated with choosing gifts for my family.

I confess to feeling letdown once the gifts are opened and the dinner eaten. The tree looks letdown, too, with no gifts underneath. I can’t explain why Hero and I leave our tree up until after Twelfth Night, but we always have. Probably this year will be no exception.

You can see why I love reading Christmas stories at any time of year. In fact, I read them all year, but especially from October until Christmas. However, this is the first time I’ve written a Christmas story.

For this novella, I blame Darling Daughters 1 and 2. Each of them asked me to write a Christmas story. Guess the Christmas spirit is genetic, right?

Kim Killion did the perfect-for-the-novella cover. I chose the woman's photo from Kim’s studio stock, but there was no background. Kim used the photo to create exactly what I had in mind. Don’t you love when that happens?

Christmas has been Celia Dubois’s favorite time of year as long as she can remember. When she moves to her parents' home a year after the death of her husband, the young widow is appalled at the town’s lack of Christmas spirit. Two months earlier, banditos had burned the church and crushed the townspeople.  Celia vows to return holiday joy to the town. Perhaps doing so might help mend her aching heart. Will Celia’s plan work magic on the town?

Rancher Eduardo Montoya knows Celia is the woman for him. She enchants him with her winning smile and vivacious nature. When her father warns Eduardo away from Celia, Eduardo is both angry and frustrated. After he stops a robbery in the mercantile, will Celia’s parents change their minds about him? Can handsome Eduardo heal Celia’s sorrow? 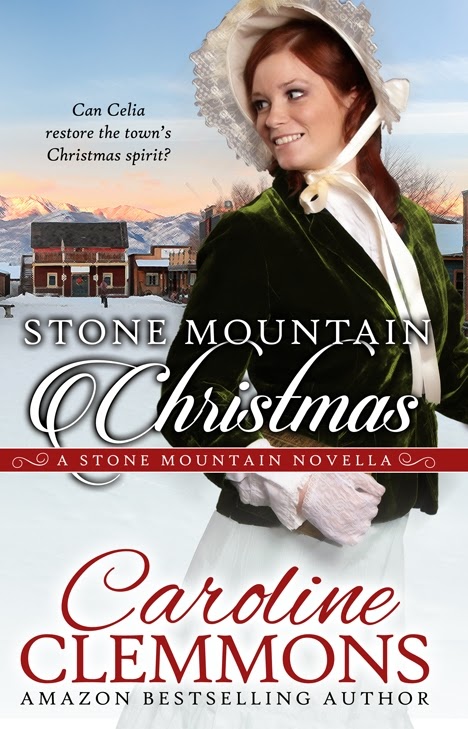 Eduardo Montoya focused on the beautiful redhead who swept the walk in front of Sturdivant’s Mercantile across the street. He turned to speak to his friend. “She is a vision, is she not?”

Micah Stone, his cousin’s husband, asked, “Have you met her or spoken to her?”

Eduardo’s gaze returned to Celia Dubois. He refused to let anyone shatter his dreams. “See how graceful she is even when performing a menial chore? When we are wed, she will not have to be concerned with such things.”

Sounding incredulous, Micah said, “I repeat, have you even met or spoken to her?”

Eduardo had no doubt his friend believed he had taken leave of his senses. He wasn’t so sure he hadn’t, but he placed a hand over his heart. “In good time, my friend. All in good time.”

Micah clapped him on the shoulder. “Come on, Romeo. We’ve finished our business with Joel. Hope’s expecting us for lunch. You can daydream about the pretty widow on our way home.”

“I suppose we must go.” He exhaled, reluctantly willing to leave town but unwilling to let anyone derail his plans.

Micah untied his horse from the hitching rail in front of his brother’s law office and mounted. “Have to say this is the first time I’ve known you to be shy about flirting with a woman.”

Determination steeled Eduardo’s resolve as he swung onto his gelding. “Never before has a woman been so important to me. You will see. One day, she will become my wife.”

The two rode toward Micah’s ranch.

From where she stood on the walk, Celia had known the men watched her. One was the youngest Stone brother. Identifying him was easy because the three Stone men looked so much alike.

But she hadn’t yet met the handsome man dressed as a Spanish Don. He fit the description she’d been privy to of Eduardo Montoya, one of the wealthiest men in this part of Texas. At least, that’s what she’d overheard while helping in her parents’ store.

He certainly cut a dashing figure in his black clothes trimmed with silver buttons. She wondered if he was entitled to dress like Spanish nobility or if he merely played a part. The silver on his saddle flashed in the sunlight and she questioned the safety of such a display.

One thing she’d noticed in her few days in town and working in her father’s mercantile, she heard tidbits of local gossip whether intentionally or not. She wondered what the gossips had to say about her. Probably best she didn’t know. Most people she’d met were friendly but there were a few prunes eager to criticize everyone.

Wasn’t that true everywhere? Yet she thought an unusual pall lay over Radford Crossing. The town definitely needed a large dose of cheer. As a matter of fact, she wouldn’t mind a measure for herself. With a sigh, she went back inside the store.