In spring of 2015, Cynthia Woolf recruited three other authors to write linked books: Callie Hutton, Sylvia McDaniel, and me. I was thrilled to be included with authors whose books I read and love. Cynthia called these THE SURPRISE BRIDES and each book was subtitled with the name of the hero: Jamie, Caleb, Gideon, and Ethan. Perhaps you’re one of the many readers who purchased the books individually. If not, now they’re available in a boxed set of all four books for the bargain price of $6.99.

The stories are set in 1880 and are about the four Fraser brothers on the Circle F Ranch near Angel Springs, Colorado. Mama Fiona Fraser thinks her sons should marry and takes matters into her own hands by sending for four mail-order brides. The four young women arrive as a snowstorm is underway and are snowbound for several days. Chaos, humor, and drama ensue. 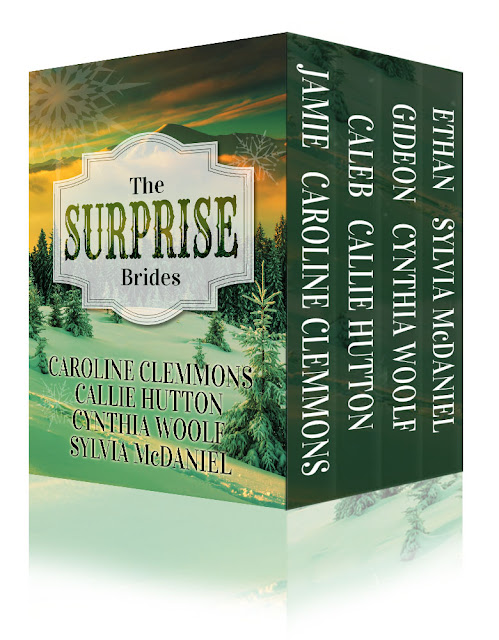 Olivia Stewart is tired of being pitied because she’s been jilted, tired of teaching other people’s children without any of her own. When she signs with a matrimonial agency, a letter from Jamie Fraser sounds perfect. A widower with two young children will give her a head start on the family she’s determined to have. But Colorado holds surprises for Olivia that endanger her goals and even her life.

Rancher Jamie Fraser is shocked to learn his mother has written for a mail-order bride for him. He has two children and no plan to marry again. Ever! His late wife taught him women can’t be trusted. Even his beloved mother isn’t above tricking her sons to achieve her heartfelt ambitions. Now he’s stuck with a wife he didn’t want—a stubborn woman bent on changing his home and his life.

Can two strong people at odds achieve happiness? Angel Springs, Colorado is a small town that inspires big dreams. Olivia and Jamie just might find their dreams meld to form a powerful and enduring love.

Caleb Fraser is the town bad boy and enjoying the single life to the fullest. He has no intention of marrying. No time soon, anyway. He keeps telling his mama he will chose a wife shortly, just to keep her off his back. However, Mama Fraser takes the situation in hand and sends for mail order brides for all four of her sons.

Lily Parker is running from humiliation and is on her way to marry a stranger. She’s traveling with three other women, all of them contracted to wed the Fraser brothers. What they don’t know is the men have no idea they’re about to be hog-tied.

Both Lily and Caleb are in for a surprise. But will Lily’s surprise be too much for Caleb to handle?

As the local preacher, Gideon Fraser often talks about the many virtues of a good marriage, but that doesn't mean he has the slightest inclination of claiming a bride of his own. No, he's been burned before, by greedy women who only want the prestige and money the Fraser family name can provide. When his mother's devious matchmaking results in his unexpected wedding, Gideon looks at the beautiful face of the woman who has sworn to be his and wants nothing to do with her. But Gideon is in danger of losing his heart until he discovers the truth. His new wife lied to him...about everything.

Ruby Haller needed a husband and fast. A treacherous man promised her the world, took her virginity, and left her without a father for her unborn child. When her father, the town minister, found out she was expecting a child, he offered her hand in marriage to the meanest man in town. Becoming a mail-order-bride appeared to be a safer choice. But instead of a rancher, she ends up the wife of a stubborn, bull-headed preacher and he's none too pleased when he discovers her duplicity. Worse? The local town beauty, who had been courting him for years, is determined to make her life a living hell.

But Angel Springs, Colorado is a small town that can inspire big dreams. It's nearly Christmas, and as these two hearts heal, a holiday miracle just might be within reach.

A reluctant groom and a runaway bride…

Beth Worthington finds herself racing from a wealthy older groom into the arms of a stranger when she defies an attempt by her father to marry her off. Instead, she takes matters into her own hands and agrees to become a mail-order bride with no intention of staying married to her unknown suitor.

Ethan Fraser is shocked when he discovers his mother ordered him a bride. To save the innocent girl’s reputation, he goes through with the wedding. What he doesn’t expect is for his innocent bride to have plans of her own – that don’t happen to include him.

When an unexpected snowstorm traps the two together they have to learn to compromise in order to survive.

Can a rich debutante and a Colorado cowboy learn to live together before the snow melts or will their different lifestyles tear them apart before they have a chance to find out?
~~~~~~~~~~~~~~~~~~

We four authors worked diligently on these full-length romance novels to insure no one contradicted what the others had written. I was surprised how difficult that was, but the result of the four books released in September 2015 was rewarding. We believe we created good reads.

That’s why we have combined the books into a box set at a bargain price of $6.99. THE SURPRISE BRIDES box set is now available at Amazon and iBooks and by now may be available at Google+, Barnes and Noble, and Kobo.

Here’s the first of the opening prologue to get you intrigued in the story:

Jamie Fraser looked northward. “Snow’s coming down fast and thick for this early. Gonna be a hard winter.”
His younger brother Gideon threw the corral gate closed. “Pete better hurry back or he’ll be stuck in town with our supplies.”
His brother nearest to him in age, Caleb, turned up his collar. “I’m heading to my house. I don’t aim to stand around waiting on Pete, no matter what Mama says.”
Jamie shot his rowdy brother a stony stare. “She doesn’t ask much of us. Won’t kill you to hold off on your carousing for a couple of hours. Besides, you can’t head into town in this weather.”
Ethan, his youngest brother, laughed and nudged Caleb. “He doesn’t have to. Has him a sweet little gal stashed at his house.”
Caleb pushed at Ethan’s chest and sent him tumbling onto the snowy ground. “Keep your mouth shut. Nobody’s business but mine.”
Ethan hopped up and Jamie stopped him before he tackled Caleb.
Jamie said, “Settle down. We have more important things to do than wrestle in the snow.” Jamie noted smoke now came from the fireplaces upstairs as well as in the big room they used as a parlor.
The jingle of sleigh bells interrupted the quarrel. Good thing Pete had attached the skids to the farm wagon earlier. Mama must have been listening for the ringing because she came out onto the porch all bundled up against the cold. Knowing the shock coming for his brothers, his sympathy extended to all three.
Guilt over his silence nagged at him. “Let’s go stand with Mama.”
All four men loved and respected their mother. Since their beloved father’s death five years before, they’d been especially considerate of her feelings. Now they trudged through the snow to stand with her while the sleigh came into view.
Gideon craned his neck. “Looks like Pete’s got passengers. Who’d be coming here in this weather? You expecting anyone, Mama?”
She straightened. “As a matter of fact, I am. I’d appreciate you boys staying right here with me. I have something important to say to you in a few minutes.”
Jamie watched Pete pull up near the steps. Something didn’t look right, so he counted the passengers.
Four?
He counted again.
Four women had arrived.


Frowning at the horrible suspicion that hit him, Jamie turned to his mother. “Mama, what have you done?”
Posted by Caroline Clemmons at 1:30 AM