SKELETONS IN THE ATTIC @JudyPenzSheluk

The author will award a $10 Amazon/BN GC to a randomly drawn host via Rafflecopter.

SKELETONS IN THE ATTIC Blurb:

What goes on behind closed doors doesn’t always stay there…

Calamity (Callie) Barnstable isn’t surprised to learn she’s the sole beneficiary of her late father’s estate, though she is shocked to discover she has inherited a house in the town of Marketville—a house she didn’t know existed. However, there are conditions attached to Callie’s inheritance: she must move to Marketville, live in the house, and solve her mother’s murder.

Callie’s not keen on dredging up a thirty-year-old mystery, but if she doesn’t do it, there’s a scheming psychic named Misty Rivers who is more than happy to expose the Barnstable family secrets. Determined to thwart Misty and fulfill her father’s wishes, Callie accepts the challenge. But is she ready to face the skeletons hidden in the attic? 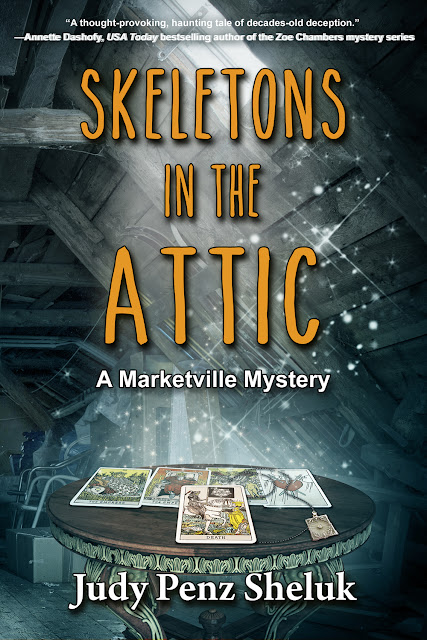 SKELETONS IN THE ATTIC Excerpt:

Callie: “You said he wanted me to move into the house? When was he going to tell me?”

“I think the initial plan was that your father was going to move back in there,” Leith said. “But of course now—”

“Now that he’s dead, you think he wanted me to move there?”

“Actually, it’s more than wanted, Calamity. It’s a provision of the will that you move into Sixteen Snapdragon Circle for a period of one year. After that time, you are free to do what you wish with it. Go back to renting it, continue to live there, or sell it.”

“Homes in that area of Marketville typically sell quickly and for a decent price, certainly several times your parents’ original investment back in 1979. You’d have to put in some elbow grease, not to mention some basic renovations, but your father left you some money for that as well.”

“He had money set aside? Enough for renovations?” I thought about the shabby townhouse, the threadbare carpets, the flannel sheet covering holes in the fabric of the ancient olive green brocade sofa. I always thought my dad was frugal because he had to be. It never occurred to me he was squirreling away money to fix up a house I didn’t even know existed.

SKELETONS IN THE ATTIC is on sale on Amazon Kindle from December 1 through December 7 for .99 (reg. price $4.99). http://getbook.at/SkeletonsintheAttic

Judy is a member of Sisters in Crime, Crime Writers of Canada, International Thriller Writers and the Short Mystery Fiction Society.

Find Judy on her website/blog at www.judypenzsheluk.com, where she interviews other authors and blogs about the writing life. You can also find Judy on Facebook
http://facebook.com/JudyPenzSheluk, Twitter @JudyPenzSheluk and on her Amazon author page, https://amazon.com/author/judypenzsheluk.

The author will award a $10 Amazon/BN GC to a randomly drawn host via Rafflecopter.

Thank you for hosting. Good news! The 99¢ sale on this book now lasts through December 15th ... grab a copy today!

Thanks so much for hosting me. i'm always happy to answer reader's questions.

Hi Tiffany. I've been writing stories In my head since I was a kid. I started writing fiction in 2003, when I took a couple of creative writing courses. I started my first book in 2011 and finished it in 2012, found a publisher in 2013, and had it published in 2014 (The Hanged Man's Noose). I try to write every day, even if I only have 15 minutes to do so. Thanks for asking.