His Montana Rescue
by Vella Munn

Former firefighter Echo Rose may have recovered from the injuries that nearly ended her life but the emotional scars still linger. She now devotes herself to protecting wildlife and sheltering her heart until local contractor Rey Bowen reminds Echo that life can offer so much more.

Rey Bowen is not the only one at Lake Serene with secrets and a desire to reboot his seriously derailed life. Meeting Echo reminds him that life can sparkle with joy and laughter and passion, but can he show the cautious Echo how to love again even as he struggles to trust his own heart? 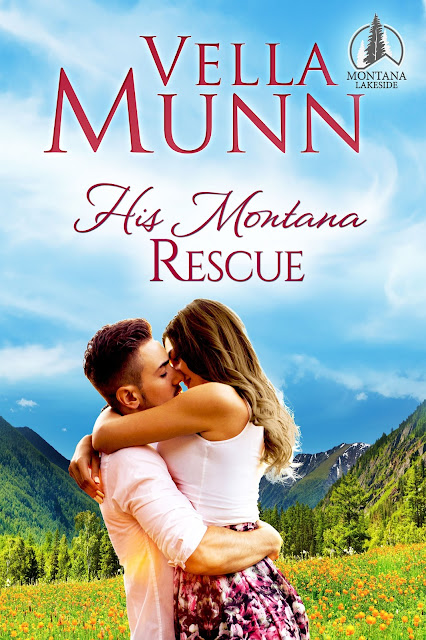 Taking it slow, she turned in the direction the words came from.

Rey Bowen was looking at her, or rather looking down at her. He wasn’t a giant of a man, just a shade over six feet, but that didn’t stop her from remembering she was at least seven inches shorter and only one hundred twenty pounds. For reasons she was careful not to examine too closely, she’d told herself the breadth of his chest and width of his shoulders were responsible for her unsettling reaction to him.

What was she thinking? Hadn’t she learned, painfully, to keep emotional distance between herself and men? She had, darn it. She’d never drop her guard.

Until she’d done in her ankle, she’d spent much of her time around physical people, most of them men. She still was around more men than women, but in recent months she'd mostly rubbed shoulders with people who spent their days behind desks.

Despite how she'd been forced to earn her living since last summer, she believed she still understood the physical male. When he was around women he was trying to impress, the breed carried himself as if he was a bull elk, strutting a bit, hard muscles pushing against too-tight T-shirts, and gazes giving out bedroom vibes.

Rey did none of those things. Instead, it was as if he’d built an emotional wall around himself. The reason was none of her business, darn it. She had enough to do dealing with her own life.

Where did you grow up? Siblings? Locale? Were you considered a “bookworm” or a jock? Married, single? Children?

Where I spent my childhood is pretty unique so thanks for asking. My mother was a teacher and a single parent to me and my younger sister. She taught at two different one-room schoolhouses in northern California where she was the only teacher. For three years we lived in an isolated mining/logging community at the bottom of a canyon and absolutely loved being so close to nature. Then we moved to a ranching/farming community where we were able to have a couple of horses. We sometimes rode them to school. My sister and I were both bookworms in part because there was no TV or even radio reception. We were total tomboys. I’m married, have two sons, and four grandchildren. My husband and I live in a small, southern Oregon town.

Who are your favorite authors and favorite genres?

I’m hesitant to list my favorite authors because as a longtime writer, I know many authors (we call each other writers) and don’t want to get into trouble. I totally love my dear friend Catherine Anderson’s historical and contemporary romances. I read a lot of romance but when I feel brave, I grab a Stephen King horror. He does incredible characterization.

I know that question above is unfair when most of our friends are writers. What’s your favorite way to relax and recharge? Hobbies?

Until her death this spring, I was responsible for my mother. My husband is disabled, and one of my sons has had four back surgeries so I spend a lot of time as a caregiver. I love working in my garden, walking the dogs, and spending time at the family’s summer cabin deep in the forest.

Do you have a favorite quote that sums up how you feel about life?

Hmm. I’m not sure I’ve ever thought about that but “What will be will be” came to mind.

Since shortly after I learned how to read and write. My first creation was a comic book with the Lone Ranger’s horse Silver as the protagonist. I didn’t think of trying to write for a living until after my first child was born and I was in an isolated area with no one to talk to when my husband was at work. I’d gone from having a career to spending my days with a terrible conversationalist so started writing and selling short stories. I’ve been addicted ever since.

Where do you prefer to write? Do you need quiet, music, solitude? PC or laptop?

I have an upstairs office with a window behind my monitor that looks out at the sky and surrounding hills. I often listen to Pandora radio or country music on the TV. Silence makes me antsy. I use a PC because I don’t like the keyboards on laptops. Plus I love this huge monitor.

I agree and do my writing at my PC in my little office. Are you a plotter or a panzer?

A bit of each. I don’t write a synopsis before getting started but I do have a bunch of notes about my characters and what I want to have happen to them.

Do you use real events or persons in your stories or as an inspiration for stories?

I don’t believe any writer can create in a vacuum. Whether we’re aware of it, our writing is influenced by what we or people we know or have heard about have experienced. To give an example, I decided to write the Montana Lakeside romance series because our family’s summer cabin is such a special place to me. I wanted to create characters in need of second chances and a feeling that they belonged somewhere special. Lake Serene and the wilderness surrounding it embraces my characters just as the family cabin and forest setting embraces me.

My daughter and I say we are the sum of all we’ve done and all the people we’ve met. Do you set daily writing goals? Word count? Number of chapters? Do you get a chance to write every day?

I feel pretty proud of myself if I write 3,000 words a day but it doesn’t always turn out that way because of family responsibilities. I could probably write a little every day but sometimes like last weekend when my grandson was in town, family comes first..

What do you hope your writing brings to readers?

The feeling that they’ve gotten to know my characters and care about them. That’s a good question.

I so admire your career and this is a dumb question to one who is so successful but it’s always included. What long-term plans do you have for your career?

I’ve been writing most of my adult life and have had maybe 70 books published so my plans are to continue exploring what fascinates me about human beings.

What advice would you give to unpublished authors?

Writing is a business. I’m serious about that. As writers, we wrap ourselves in a fictional world but if we want to be published (even self publishing) we must interact with the publishing industry.

Share a fun fact readers wouldn’t know about you.

I hate shopping. I own one purse, three pairs of shoes, two skirts, and no dresses.

Share something about you that would surprise or shock readers.

In addition to romances, I write erotica under a pen name.

Is your book a series? If so, how long? Family saga, other?

His Mountain Rescue is book #2 in a five book contemporary romance series under the Montana Lakeside umbrella. (four books and one novella)

Is there anything else you’d like readers to know about you?

Slippers in winter. Barefoot in summer.


Vella Munn freely admits to being a dedicated and sometimes demented fiction writer. She has always been drawn to nature and those who feel at home in it. A career writer, she has had way over 60 books published, most of them romances both past and present. As far as personal statistics go, she has one husband, two sons, four grandchildren, and is owned by two rescue dogs. Home is southern Oregon within a two hour drive of Crater Lake. She frequently visits Montana in her mind and heart.

Vella Munn will be awarding a several photographs of Montana's wilderness sent via email (international and U.S. giveaway) to a randomly drawn winner via rafflecopter during the tour.

What a lovely website. I love how peaceful it feels. Christmas is over but I'm still reflecting on how blessed I am to have both sons and their families living nearby. Having them over yesterday was doubly rewarding because this is my first Christmas without my mother alive. Also, my husband is disabled and those I love and who love us understand how much our lives have changed.

Thank you for sharing today, Vella. Best wishes for 2017!