THE BRIDE TRAIN ARRIVES WITH A NEW INSTALLMENT!

Warm, witty…a little wild. That’s what you’ll find when you pick up a book by bestselling author E.E. Burke. Her chosen setting is the American West, and her latest series, The Bride Train, features a cast of unusual characters thrown together through a misguided bride lottery. Maybe Baby, part of the multi-author Magnolias and Moonshine series, is her first Contemporary Romance.

Other series include Steam! Romance and Rails, which follows the lives of dangerous men and daring women caught up in a cutthroat competition as the railroads advance across the frontier. Her novella, Victoria, Bride of Kansas, part of the unprecedented American Mail-Order Brides series, is a Kindle Top 100 Bestseller and a semifinalist in the 2016 Kindle Best Book Awards.

E.E., also known as Elisabeth, has earned accolades in regional and national contests, including the RWA's prestigious Golden Heart®. Over the years, she’s been a disc jockey, a journalist and an advertising executive, before finally getting around to living the dream--writing stories readers can get lost in. 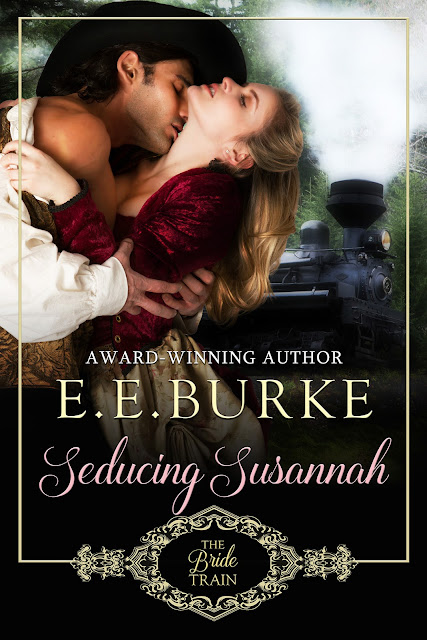 Tell us a little about your new release.

I’ve just released the fourth book in my Bride Train series, Seducing Susannah. My readers have been anticipating this story over the past three books, the romance between the unpopular railroad agent and a feisty widow who has been his adversary since Book 1. It’s so much fun to develop secondary characters throughout a series and then give them their own story.

The series is different from most mail-order bride scenarios because the matchmaker in this case is the railroad. The concept was inspired by true events and features a cast of unusual characters taken from the pages of history.

You can meet the first four couples in  this video:
https://www.youtube.com/watch?v=n-b6dIc4_WA 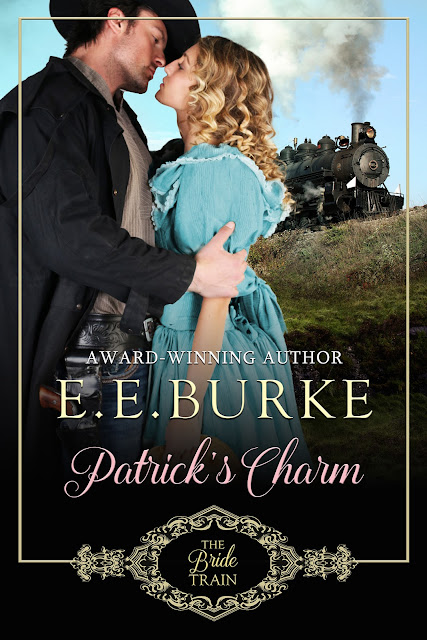 For this month only, the second book in the series, Patrick’s Charm, is on sale for only 99 cents. You can read more about the series on my website.

-What story are you working on next, and what inspired it?

My first contemporary romance will be released April 26 as part of a multi-author project called Magnolias & Moonshine.  This book will also give readers a taste of a new Contemporary Western series that will come out later this year, Texas Hardts.

Maybe Baby features one of the descendants of my historical character Ross Hardt (the railroad agent in Seducing Susannah). Here’s a blurb and short excerpt:

Could a contract between them lead to more than a baby? Maybe.

High-powered executive Jen Chandler can’t ignore the urgent ticking of her biological clock. The nesting instinct has kicked in big-time, and she wants a baby. Only, she isn’t interested in acquiring a husband first. Taking control of her future, she sets out in search of a donor.

Logan Hardt, a laid-back cowboy who shows up at her Atlanta home one day, turns out to have the right genes, as well as a pressing need for cash. He’s seduced by more than Jen’s generous offer, and the closer the time comes to say goodbye, the less willing he is to honor a contract that would require him to walk away and never look back. 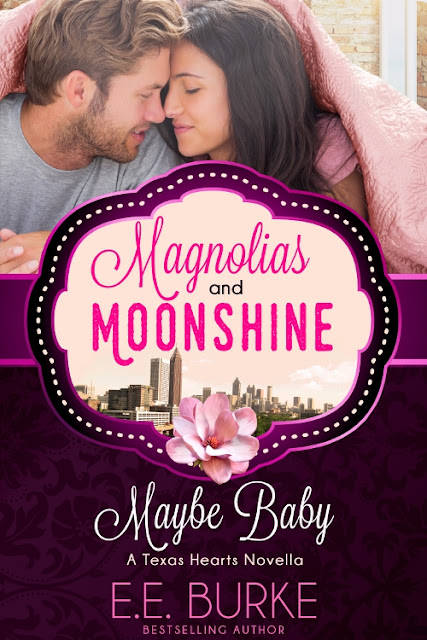 “She wants me to donate my sperm!” Logan whisper-shouted into the cell phone. He didn’t want to wake Troy and Celeste, who were in the bedroom next door.
His brother howled.
“It’s not that funny.” Logan started across the guest room, which was twice the size of his bedroom at home with twice the furniture. He caught his shin on the corner of the bed frame, swore at the sharp pain, and hopped around the bench pushed up to the end of the bed. He then dodged an armchair and limped to the paned window.
He could see over the bushes he’d trimmed to the house next door—Jen’s ivy-covered castle. Did she plan on filling it with children? She didn’t seem the Mother Hubbard type. In some ways, she fit the image that Troy had painted—cool, poised, aloof. She worked hard at hiding her vulnerability, but it was there, lurking in those big brown eyes.
“Tell me about the date,” Huston urged.
“Not much to tell. We went to a barbeque joint. Ate. Talked.” Logan scratched his head. He couldn’t figure her out. The way she looked at him, like she was hungry for something. Not sex, exactly. He’d seen that look many times and could recognize lust. No. Jen’s need went deeper. So why wouldn’t she be looking for a relationship before having a baby?
“How did she lead up to the big question?”
“She told me about her ovulation app.”
“Her what?”
“She tracks her ovulation on a smart watch.”
Static noise came from the other end of the line—or was it snickering?  “Sounds like an interesting conversation.”
With a sigh, Logan leaned his arm up against the window frame. “It was.”
Light spilled from the back of Jen’s house onto the brick patio and her dog darted outside. Not long after, Jen came into view as she crossed the patio and ran into the yard, wearing what looked like a baggy sweatshirt and sweatpants. She had her hair pulled back in a ponytail and still looked cute as a doodlebug.
The dog jumped as she lifted something in air. They played tug-of-war with what looked like a carcass, but was probably just a stuffed toy. Her gleeful laughter drifted upward and made him long to go down there and join her.
Logan turned away from the window. She wouldn’t appreciate him butting in on her private time, and she’d think he was a weirdo if she caught him spying on her. “She asked a bunch of questions. I thought she was interested.”
“She is interested—in your sperm.” His brother snort-laughed.
“Honest to God, I’m hangin’ up if you don’t stop,” Logan threatened. He ought to know better than to call Huston to talk about this. His brother couldn’t have a serious conversation with an undertaker.
Who else would he call though? Huston was his closest sibling, more than that, his best friend. Only thirteen months apart, they’d been inseparable all the way through high school. The two of them, together, had taken all the shit their older brothers could dish out, or anybody else for that matter. Usually, though, he was the one listening to Huston brag about his latest conquest or moan about getting rejected by a girl he had his eye on. Not that Logan was bragging, and Jen’s request defied categorization.
Women had chased him.
Women had used him.
Women had sworn to love him forever, then betrayed him.
But until now, no woman had asked him to give her the means to make a baby—without any involvement beyond jerking off. Jen hadn’t offered a different option. The way she phrased it made it sound like she expected him to deliver his contribution in a mason jar, like ranchers did with bull semen.
“What’s the big deal, Logan? Guys donate to sperm banks all the time.”
“She’s not a bank.”
“Didn’t you say she offered you twenty grand? Sounds like a bank to me. And she’s offering you a better rate.”

-Do you consider your books plot-driven or character-driven? Is that how you naturally write, or is there a purpose for what you chose?

My books, even the ones with complex plots, are character-driven because they are romances, and romances are about relationships. What’s interesting is that my stories always start with characters. They might be inspired by history, but they are unique “people” who appear in my imagination and talk to me. My difficulty was in taking those fascinating characters out of my head and putting them “on the page.” Through books, conferences, critique and mentoring, I learned the skills I needed to do this…and I’m still learning. If romance is what you want to write, seek out the best romances with the most memorable characters. Learn from the masters.

-What do you think about when you are alone in your car?

I should be paying attention to the road! Ha! When I’m on a road trip, I usually mull over my current work-in-progress, figure out how to fix a problem, think of new ideas for books, sometimes I write whole scenes in my head, including dialog, and I talk to my characters. Good thing I’m alone, eh? Nut case!

-What appeals to you most about your chosen genre?

At heart, I’m a hopeful person, and I truly believe that love is powerful enough to change people. Even change the future.

-How do you think you’ve evolved creatively?

I’ve always been a storyteller. Even as a child, I made up stories and I loved to tell them to people. I wrote a few (terrible) plays and penned (bad) song lyrics, drew comics and illustrations. I started out as more of a visual artist, and kind of evolved into a writer in college and ended up in Journalism. Reading romances in the late 80s sparked a desire to write them, but by then I’d gravitated into a marketing job. Frankly, fear held me back. I did a lot of creative thinking and even writing while I was in advertising, but I didn’t start crafting novels until I was 50. What feeds my creative well? History, art, reading, movies, television shows, plays, music, symphonies, ballet, parties, school, church, family dinners, walks around the block. Everything. I see every part of my life as potential seasoning and food for creativity.

There’s some debate about whether you can “teach” creativity. I don’t think it’s something that’s taught as much as something you release and then learn to direct. That takes skills, so I’d say over the past ten years, I’ve evolved creatively as a writer and a storyteller through all those things I mentioned earlier, as well as seeking out learning opportunities and trying new things.

-What is the hardest thing about writing?

Digging deep to discover the gems, bringing them to the surface and polishing until it shines.

-What was the hardest thing about writing your latest book?

Embarking on the challenge of writing my first Contemporary romance. I’ve only written Historical Romance up until this year. Talk about fear! I was scared spitless that I wouldn’t have the right “voice” for Contemporary. But I’d committed to a project and the book had to be Contemporary, so I was forced to spread my wings and leave my comfortable nest. I’m glad I did. I’ve learned that I really like writing contemporary as well as historical, and based on early feedback, I’ve made a good start.

-What is the easiest thing about writing?

Coming up with ideas and getting “lost” in the story. I love the first draft stage when you just write and write and you think you’ve written the most amazing words ever penned. This happy delusion lasts until the editing process.

Don’t forget: this week Patrick’s Charm is only 99 cents:  https://eeburke.com/books/patricks-charm/

If you sign up for my newsletter you can start the Bride Train series FREE with Book 1, Valentine’s Rose. Sign up here: https://eeburke.com/newsletter/