THE FLAMES OF FLORENCE 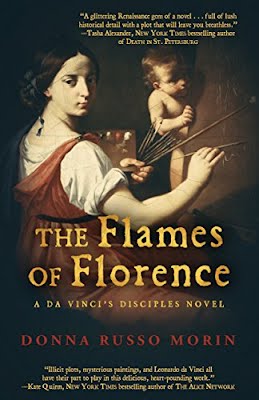 "A glittering Renaissance gem of a novel. Donna Russo Morin, a master of her craft, has penned an intricate story full of lush historical detail with a plot that will leave you breathless." —Tasha Alexander, New York Times bestselling author of
Death in St. Petersburg

"Illicit plots, mysterious paintings, and Leonardo da Vinci all have their part to play in this delicious, heart-pounding work."
—Kate Quinn, New York Times and USA Today bestselling author of The Alice
Network

THE FLAMES OF FLORENCE Summary:

In her final standalone novel featuring Da Vinci's Disciples, Donna Russo Morin delivers a thrilling story of the secret female artists of Florence, under the tutelage of Leonardo Da Vinci, and their heroic, potentially deadly efforts to save great works of art from the infamous Bonfire of the Vanities.

Lorenzo de Medici is dead, and his son Piero has brought war and famine upon the city of Florence. Yet, the glory that is Renaissance artistry grows more magnificent, as does the work of the women known as Da Vinci's Disciples. Now they face their most dangerous challenge, one shrouded in the cloak of a monk.

From the ashes of war, Friar Girolamo Savonarola rises. Some call him a savior and a prophet, a man willing to overthrow tyrannical rulers and corrupt clergy, the Borgia Pope among them. Fra Girolamo is determined to remold Florence from an avaricious, secular culture to a paragon of Christian virtues.

Many call Savonarola a delusional heretic, incapable of anything but self-serving fanaticism. When he sets out to destroy all secular art forms, Da Vinci's Disciples call him an enemy … but not all of them.

Isabetta and Gianetta walked to the mercato as they did most days. Both understood the depth of kindness Andreano and Mattea had shown them, taking them in as they had done. For Gianetta, her cousin’s kindness went far deeper, for he accepted his role as her guardian without hesitation. They returned such kindness, though in a small manner, by making for the markets early each morning, to buy the freshest fruit and vegetables the farmers delivered to the city. As a widow, Isabetta walked about as she pleased, no chaperone necessary, nor a veil upon her head. Gianetta, a young unmarried woman, could never be seen out of doors without her veil, not a terrible hardship with its embroidered lace sprinkled minutely by small jewels.

“I hope there is some fresh lamb,” Gianetta chirped. “We have not been able to find any in quite some time.”

“That would be nice,” Isabetta agreed.

Both women struggled to speak of inconsequential things. Life had been far too full of serious conversations; at times, the mind needed the triviality of life for it to feel real.

Isabetta spun, seeing the three boys—all robed in white—rushing away from them, one holding Gianetta’s veil in her hand—strands and roots of her hair still within the teeth of its comb—having yanked it from her head. With swiftness of foot, Isabetta caught up to them, ran before them, and stopped.

“May we help you, signora?” the oldest of the three, perhaps as old as twelve or thirteen, asked of her.
Her lip curled as she fell on them hard. “How dare you!” she spat at them.

The boys looked the very portrait of innocent incomprehension. “We do nothing more than our job.”

“Your job?” Isabetta’s head rocked back and forth as she scoffed at them. “It is your job to accost young women?”

“No, signora,” another replied, a golden haired child no more than ten. “We are to remove all…all…” his eyes rolled up in his head as he searched for the words, “…all vain glories from the
streets of Florence.”

“Vain glories? What nonsense is this?”

“As I said, signora,” the first spoke again, taking a step toward her. If he hoped it would make her take a step back, he was disappointed.

“We do our job. Nothing more and nothing less.”

“And this is what your master tells you to do?”

The boy puffed up his chest. “Sì, signora.”

Isabetta longed to slap the smirk from his face. Instead, she leaned over and leaned down, her head only inches from the oldest.

“Tell your master, Isabetta Fioravanti believes he is deranged and dangerous.”

The boy twitched beneath his pristine robe, his agitation and anger longing for release. His hands fisted by his side as his eyes narrowed to slits.

Their gazes locked together in battle, neither giving way.

“Come,” the smallest of the boys pulled upon his cohort.

Alberto, as he was, began to step away, stepping backward from them.

“Grazie, signora,” he bowed to Isabetta, “for the gift of your name.”

He need not say more, nor did she.

Only when they were out of sight did Isabetta return to Gianetta’s side, examining her head, finding pinpricks of blood on her scalp.

“Do you feel well enough for the mercato?” Isabetta asked of her.

Gianetta nodded her stinging head, covered it as best she could with her small lace handkerchief retrieved from her waist purse, and they began to walk once more.

“You act rashly,” Gianetta chastised her.

“That man is a rash,” Isabetta responded, “and I believe we have just caught it.”

Gianetta grabbed her arm. “You and I?”

Isabetta shook her head. “No. Florence.”

"Donna Russo Morin renders one of the most tumultuous
periods in Florence's history in bright colors and with vivid descriptions.
This tale of a group of determined women standing up for what they believe in …
will absolutely resonate with modern readers." —Alyssa Palombo, author of
The Most Beautiful Woman in Florence

Donna Russo Morin’s passion for the written word began when she was a child, took on a feminist edge as she grew through the sixties, and
blossomed into a distinctive style of action-filled historical fiction at a defining moment in her life.

As a second-generation American of full Italian
descent, Donna combined her historical research with her genealogical studies, finding that her birth name (Russo) and her family roots are traceable to ninth century Florence…the very city in which the Da Vinci’s Disciples trilogy is set.

Donna Russo (Morin) is the internationally published author of six multi-award-winning historical novels including PORTRAIT OF A
CONSPIRACY: Da Vinci’s Disciples Book One (a finalist in Foreword Reviews BEST
BOOK OF THE YEAR), and THE COMPETITION: Da Vinci’s Disciples Book Two (EDITOR’S CHOICE, Historical Novel Society Review). The final book in her Da Vinci’s
Disciples trilogy, THE FLAMES OF FLORENCE, releases May 8, 2018. Also this
summer, my novel, inspired by our own home state, GILDED SUMMERS: A Novel of
Newport’s Gilded Age will also release this summer. Her other titles include
THE KING'S AGENT, recipient of a starred review in Publishers Weekly, The
COURTIER'S SECRET, THE SECRET OF THE GLASS, and TO SERVE A KING.

A 25-year professional editor/story consultant, her work spans more than 40 manuscripts.  She holds a BA in Communications and an A.A. in English Literature.  Donna teaches writing courses at her state’s most prestigious adult learning center, online for Writer’s Digest University, and has presented at national and academic conferences for over ten years.  In addition to her writing, Donna has worked as a model and an actor with appearances in Showtime’s Brotherhood and Martin Scorsese’s "The Departed". Currently under contract to a consortium of international producers, Donna has added screenwriting to her professional acumen.

Her sons—Devon, an opera singer; and Dylan, a chef—are still, and always will be, her greatest works.

Thank you for posting