MEDICINE AND MIRACLES IN THE HIGH DESERT

WOW! Women on Writing Presents
A Book Blog Tour for:

Medicine and Miracles in the High Desert:
My Life Among the Navajo People 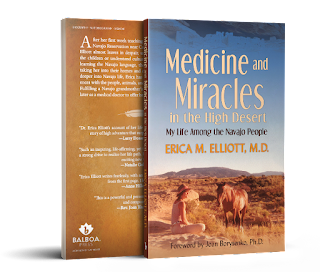 This is the true story of a young white woman, Erica Elliott, who comes to the Navajo Reservation in 1971 as a newly minted schoolteacher, knowing nothing about her students or their culture. After several blunders and misunderstandings, and beset by loneliness and despair, Erica makes a determined effort to overcome the barriers of language and culture. From the moment she begins learning the Navajo language, the people open their hearts and homes to her, inviting her into a world that will profoundly impact the rest of her life.

Erica falls in love with her Navajo students—along with their enchanting land, healing ceremonies, and rich traditions. She witnesses many miracles during this time, and experiences her own miracle when the elders pray for her healing. She survives fearsome encounters with a mountain lion and a shapeshifting “skin walker.” She learns how to herd and butcher sheep, make fry bread, weave traditional rugs, and more.

Erica returns years later to serve the Navajo people as a medical doctor in an under-funded and under-staffed clinic, where she treats myriad ailments, delivers countless babies, and performs emergency procedures. When a medicine man offers to thank her with a ceremony, more miracles unfold.

Read more about the book at GoodReads.com and at

Erica Elliott is a medical doctor with a busy private practice in Santa Fe, New Mexico. A true adventurer, she has lived and worked around the world. She served as a teacher for Indigenous children on the Navajo Reservation in Arizona and in the mountains of Ecuador.

In 1976, she was one of the first American women to climb Aconcagua, the highest mountain in the western hemisphere. She taught rock climbing and mountaineering for Outward Bound and, after her first year of medical school, she led an all-women’s expedition to the top of Denali in Alaska.
In 1993, Erica helped found The Commons, a cohousing community in Santa Fe where she continues to live. She gave a TEDx talk about living in cohousing. Referred to affectionately as “the Health Detective,” she treats patients who come to her from all parts of the country with mysterious and difficult-to-diagnose illnesses. Erica is a frequent radio guest and has given workshops at various venues, including Esalen and Omega Institute.

I don’t often review books personally. For full-time authors, reading time is precious. I agreed to review this book because my family and I have for years been interested in the Navajo people in fiction and fact. I’m so glad I read this book!

Erica Elliott relates a fascinating story of her time with the Navajo people, first as a teacher at Chinle and then as a doctor at the Cuba Medical Center. What intriguing vignettes she relates in this book.
Beginning as a fourth grade teacher at the boarding school in Chinle near Canyon de Chelly, she learned to speak Navajo to communicate with her students. Soon she was in turn taking each of her students home for a weekend with their family. Because of her efforts to understand their culture and learn their language, she was accepted by them. If you remember hearing about the Navajo Code Talkers in WWII, then you understand the Navajo language is quite difficult.

In a desire to learn more, she spent one summer with the parents of a friend. While there, she worked as a sheepherder. She even learned to butcher a sheep—a skill she had never wanted to acquire.

Dr. Elliott was one of the few whites allowed to participate in native rituals. She describes several of the miracles she witnessed. The Road Man, the man conducting the ceremony, warned her whites would not believe her if she told what went on. While in medical school, she learned this was true.

Later, at a Blessing Way ceremony, the leader prayed for her future. As time passed, the prayer came true exactly in the order of the prayer. You’ll have to read the book to learn what that way was.

The book has been optioned for a TV series. In addition, the book was named one of the best indie books of 2020 by the Independent Book Publishers Professionals Group. It was a Finalist in the 2020 Next Generation Independent Book Awards. She has promised more books and I'll eagerly look forward to them.

I highly recommend MEDICINE AND MIRACLES to anyone who enjoys learning about other cultures and/or the Navajo people and/or adventurous women.

Here is a short video of a PBS interview about the book. 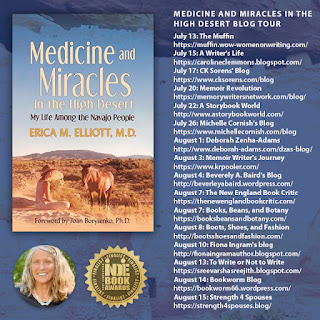