DECEPTIVELY YOURS by Joan Reeves 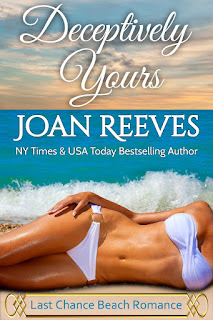 A passionate romantic suspense about a woman and a man

who are destined to be together.

Orphaned at 12, Tatiana was taken in by her cousin who used her artistic talent in a scheme to cheat wealthy men. Her life became unending fear until six years later when she met a man who gave her love, passion, and hope for the future.

When she defied her cousin, he responded with a vicious attack. A chance meeting with an elderly man saved her. He helped her disappear, leaving everything behind including the man she loved.

Ten years later, Tatiana has done everything to prove she’s worthy of the fatherly love her benefactor gave her, but she’s never forgotten the man she loved. Destiny gives her a second chance at love when she meets him again, but she resists the love he offers. She’s not the girl he fell in love with. She never was. She can’t undo the deceptions and the lies nor the secrets she’s kept—and continues to keep.

He knows a devastating secret lies at the heart of her disappearance, but he doesn't understand her refusal to give their love a chance. He's willing to wait for her to tell him what happened—until he realizes danger stalks Tatiana. Now he rushes to discover what happened ten years ago. Why did she disappear?

Will Tatiana find the courage to reveal her secrets to him? Will he still love Tatiana once he knows the truth? Can love survive lies and deception?

When he parked in the driveway, he noticed a rainbow of Adirondack-style chairs had been added to the shaded area of the veranda. When the door opened, Tatiana was smiling. The smile faded the minute she saw him. She was wearing an elbow-length white tee shirt and baggy white cotton pants that fell to the knee. The contrast between the baggy clothes and the white bikini intrigued him. She was barefoot, and he couldn’t help glancing at her sexy red toenails.

“Hello, Tatiana. You must have been expecting someone else,” he murmured. His gaze rose from her feet, glided up her body, and came to rest on her gray eyes.

Her voice was soft, hesitant. “I was waiting for Sam.”

“Sam?” He lifted an eyebrow in question. Was that her boyfriend?

“Sam as in Samantha Ruiz. She’s supposed to come over for lunch.” Tatiana shifted her weight from one foot to the other.

Declan regarded her. She was nervous. “Are you and Sam friends, or is she coming in a professional capacity?”

She stared at him for a moment before answering. “We met a few summers ago when she was on leave and visiting her grandmother. I heard she moved in with her grandmother, and she’s on your police force now.”

“So she is. We’re lucky to have her.” His blue eyes searched hers, looking for answers. Looking for something—a sign that she still felt something for him, even if it was only lust. He found no evidence of anything except wariness.

“Look, Declan. I’m glad you stopped by. I wanted to apologize for yesterday. Of course, I recognized you, but I was embarrassed. You see, my adventure in New York that year was something I’m not proud of.” She gave him a quick smile, but didn’t hold his gaze.

Maybe she hadn’t perfected the art of lying to someone when she was staring into his eyes, Declan thought.

Her gaze flicked to his then to the street then back to him. “I guess it was more a misadventure to be honest. Just a fling. I’ve tried to forget my time there. I hope you’ll understand. I’m sorry if what I’m saying hurts your feelings. It’s just that I’ve got my head screwed on straight now, and I didn’t then. I’m no longer that pathetic little girl.”

Pathetic? He’d never thought of her that way. Did she expect him to forget their time together? If she did, she was doomed to disappointment. He remembered every detail of how she felt when she lay beneath him. Every detail of how it felt to be inside her. How she’d tasted, smelled, and the sounds she made when she climaxed. He remembered what they’d talked about, their dreams of a future together. For a couple of minutes, Declan said nothing. When she finally lifted her eyes to his, he smiled even though he was nearly choking on the anger that filled him. He began clapping his hands together. “That was one hell of a speech, Tatiana,” he jeered. “I guess Tatiana is your real name since every Tom, Dick, and Jane on the island seem to know you by that.”

The color leached from her face, and her gray eyes flinched from his cold hard gaze. That didn’t stop him. He was furious with what she’d said. A fling? He knew it was more than that for him just as it was more than a fling to her. He was furious that she was lying to him. The girl she’d described hadn’t been the one in his arms and in his bed ten years ago. “How long did you rehearse that? It was really effective. Especially those pauses while you gathered your thoughts. Very impressive.”

He heard the oyster shells in the driveway crunching as a car pulled in, but he didn’t look away from the woman who had broken his heart by disappearing. In a low hoarse voice, he uttered the truth, “I had nightmares about you lying dead, unclaimed, in some back alley. Nightmares that maybe your body had been dumped into the East River. If only you’d told me you were just having a fling, I wouldn’t have wasted month after month searching for you.”

Her face was as white as the clothes she was wearing. Her arms wrapped around her body as if to protect her from his bitter words. Declan didn’t let her apparent distress staunch the anger that flowed from him like volcanic lava. “I don’t know what game you’re playing, Tatiana, or Amy, or whatever the hell your name is, but I intend to find out.”

The noise of footsteps on oyster shells broke the deadly calm between them. “Hey, Chief,” Samantha Ruiz called. “I didn’t know you knew Tatiana. Did she invite you to lunch too?”

“No, we were just getting acquainted,” he said without turning to look at Sam Ruiz. “Right, Tati?”

She spoke so softly her words didn’t penetrate the resentment boiling inside him. He was even angry that she looked shattered, as if she held tears back by sheer force of will. He turned away and left her standing alone on the veranda.

Declan cursed all the way to Blue Moon House where he was living until he finished the renovations on the cottage. He shouldn’t have lost his cool that way. He thought of how Tatiana had flinched with every word he’d said, as if each word were a bludgeon striking her. Serves her right since her words had chipped away at his broken heart. What had she wanted? To grind the pieces of his broken heart into dust? Suddenly, he realized what she’d said before he’d stalked away.

“I’m sorrier than you’ll ever know. Please go away and don’t come back.”

“Damn it!” He pounded the steering wheel with his fist. He didn’t believe the first sentence. If she’d meant that, then she wouldn’t have spoken the second sentence. Why was she so intent on making him go away? He wasn’t going anywhere. Not until he discovered what her lies were hiding. He had a flash of memory of her pale, stricken face. She had deceived him ten years ago, and she was trying to do it again. He’d begun to believe nearly every word out of her mouth was a lie. What was she covering up?

And why did he feel so damned guilty when he thought of her stark white face and her defensive posture? 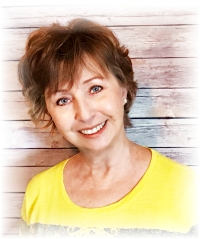 Joan Reeves is a NY Times and USA Today bestselling author of Contemporary Romance. All of her stories have the same premise: “It’s never too late to live happily ever after.”

Joan lives her happily-ever-after with her hero, her husband. They divide their time between a book-cluttered home in Houston and a quiet house at the foot of the Texas Hill Country where they sit on the porch at night, look at the star-studded sky, and listen to the coyotes howl.

Be the first to know about New Books, Free Books, and Bargain Books by signing up for Joan’s Free Newsletter. When you confirm your subscription, you’ll receive a free romance ebook.

Thank you for hosting me today. I truly appreciate the support.

Another great book from Joan Reeves! I loved it.

Excellent excerpt! I'm intrigued. Good thing I have it on my Kindle!