REVIEW OF MUCH ADO ABOUT MADAMS 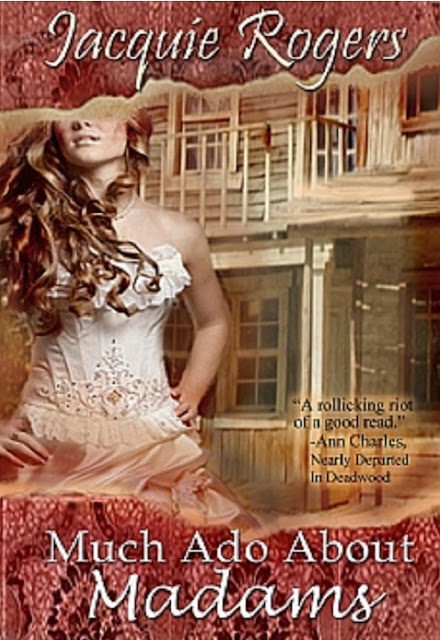 MUCH ADO ABOUT MADAMS (Hearts of Owyhee)

Lucinda Sharpe has spent ten years overcoming her past. Her former guardian, the not-so-Reverend Hundall, called her “the daughter of Satan.” As a recent graduate of Miss Hattie’s School for the Refinement of Young Ladies, Lucinda has escaped the Hundalls and her past to begin her career as a schoolteacher. What a shock when she arrives in Dickshooter, Idaho Territory and meets her pupils. Oh, my! The students aren’t scrubbed and darling children; they’re fairly shabby prostitutes.

Lucinda is forced to remain in the Comfort Palace...um, hotel until the next stage. In the meantime, she meets the owner, Reese McAdams. He is nothing like she expected, and she is amazed she almost likes him. Before she can board the next stagecoach out of what passes for a town, the Comfort Palace women convince Lucinda to remain and teach them to read and write so they can obtain better jobs. Her agreement sets in motion another wonderful story by Jacquie Rogers. Although part of the Hearts of Owyhee series, MUCH ADO ABOUT MADAMS initiates the Soiled Dove mini-series featuring Fannie and the other ladies from the Comfort Palace. I was pleased that the Gardner sisters from MUCH ADO ABOUT MARSHALS made an appearance, although their time was too short. (I hope for a book about banker, Iris Gardner, in the future.) In the meantime, Jacquie Rogers’ eagerly awaited next release will be MUCH ADO ABOUT MAVERICKS.

Set in 1882 Owyhee County, Idaho, MUCH ADO ABOUT MADAMS is a trmenbous bargain at only 99 cents on Amazon Kindle at

I am supposed to say that I received this book from the author for my unbiased review. Believe me, I would have purchased this book had Jackie Rogers not given it to me! She is one of my favorite authors.

Here is Jacquie Rogers' bio from her website www.jacquierogers.com. You will quickly see how funny she is:

My parents were poor but honest sharecroppers …


Okay, perhaps that's stretching the truth a little, but I come from a long line of no-holds-barred storytellers, so I like to exaggerate. Worse yet, I'm a writer, and writers do tend to get carried away. My parents actually owned a dairy farm in Owyhee County, Idaho, near Homedale and I grew up milking cows, breaking ice on the calves' water troughs and checking the bottoms of my shoes before entering the house. While I don't miss the frigid Idaho winters, I do recall those soulful calf eyes with fondness. Nowadays, the only soulful eyes I see are those of my husband when he pokes his head in my office for the tenth time and asks me when I'm going to fix dinner.

Still, those early farm days gave me a solid grounding in Real Life and provided me with endless fodder for my stories. Those days seem so bucolic now. Back then, I was a member of the Homedale Rod & Gun Club, Stateline Grange, and Sage Creek 4-H. I showed livestock, was the county fair queen, and garnered the title of girl's champion in the small bore rifle competition. (Now there's a scary combination!) I rode my horses to hell and back, with special emphasis on riding into the sunset while harmonica music played in the background.

But there came a time when this farm girl hankered for more than practicing her county fair queen wave (elbow-elbow-wrist-wrist) and scraping cow pats off her shoes. For one thing, I couldn't get a date--nobody wanted to go out with a tiara-wearing sharpshooter who wore stinky shoes. So I put away my tiara and became a professional photographer, which served me well during my college days.

I also had a stint as deli manager at Kmart, which became something of a rite of passage for me. You meet the strangest people in a Kmart. After the Kmart stint, I figured I could handle anything, even politicians. Due to my deep familiarity with bulls**t (animal excrement? animal leavings? cow doody?), I made the logical move up to political campaign manager. I was a natural at it, which surprised no one, especially my family. I can sling it with the best of them.

And then came my tenure as accounts receivable manager at the Boise State University Bookstore. It was like hiring an alcoholic to work in a liquor store. I had to enroll in a 12-step program when I quit that job. (Hello. My name is Jacquie and I'm a bookaholic.)

And then I fell in love. Mark had never seen my tiara and he didn't know I could plug the fringe off a squirrel tail at fifty yards with a rifle. He did know about my days as a political campaign manager, but like he said, nobody's perfect. We got married and honeymooned in Ketchum, Idaho. We were young and in love and playful. One day, we went down to the swimming pool of our honeymoon hotel. While I futzed around locating a lawn chair and folding my towel and straightening my bathing suit, Mark jumped into the pool. I felt my way to the pool without my glasses a short while later and spotted Mark's bald head at the other end. Submerging myself, I swam up behind him sneaky-like. Since we were the only ones in the pool, I reached down there and gave him a friendly little squeeze, as newly married couples are wont to do. The reaction I got was better than I could ever have expected, and there was only one tiny problem that ruined the whole effect: it wasn't Mark.

That scene will likely end up in one of my books, as soon as I fully recover from the mortification. Which will be in about 100 years.

Parenting, Programming, and Penning (the writing kind, not the cattle kind)

We moved to Seattle and I became a programmer, then started a software company (no, not that software company!). And like most new business owners, I made a few mistakes now and then. I call them my $15,000 stapler mistakes (read undercharged a job). Most business proprietors who've been in business for any length of time eventually buy a $15,000 stapler. Still, it was the good life.

I joined Romance Writers of America and the local RWA chapter. Because I didn't know any better, I allowed myself to be elected president of the Greater Seattle RWA chapter. I was in it up to my eyebrows. After numerous writing conferences, I thought I knew it all, and entered some writing contests.

I found out I didn't know it all.

Back to the drawing board! More conferences, more workshops, more how-to books, more delving into the craft of writing. I must have been doing something right, because people started asking me to do workshops. Now I do writing workshops and teach on-line writing courses.

During all this, I wrote and wrote. I did westerns. And paranormals. And futuristics. And lots and lots of humor. I even, God forbid, started blogging. http://keelysfaerygoodadvice.blogspot.com

I Become a Writer

So, how did I start writing? I got sick. So sick that I lay in bed for two months with pneumonia, unable to do anything but read. Which was a good thing, since we had a bazillion books. In fact, floor to ceiling bookcases filled to overflowing, with stacks of books on the floor in front of the bookcases. I read them all, and then there was nothing left to read.

My daughter, an avid Romance reader, tried to get me to read one of her books. I refused. She was adamant. To get her to stop yammering, I finally broke down and read a Romance. It was awful. My daughter told me you couldn't judge an entire genre by one book, and gave me another book to read. It was Kathleen Eagle's FIRE AND RAIN, and I loved it. In fact, I loved it so much I went on to read 100 more Romances while I recuperated.

Those books struck a spark in me. I kept getting ideas for stories. Scenarios blipped through the jellied mass in my head. Voices began talking in my ear. Characters leapt full blown into existence and followed me around the house, nagging me to put them into a book. People were making love in my bed, taking bubble baths in my bathtub, drinking wine in front of the fireplace I didn't have. Handsome men walked out of the bathroom with just a towel around their hips. Dainty heroines with secret babies baked chocolate chip cookies in my kitchen and took them to the cute guy next doors. Bronc busters moseyed into the living room chewing on a piece of straw and oozing boyish charm. Rain-drenched heroines appeared on my doorstep like adorable waifs, unable to find their way home because they had amnesia. I couldn't stand it. I wrote a book about a heroine waif who baked cookies for her neighbor who was a bronc buster hiding out from the law after being falsely accused of a heinous crime.

When I wrote The End, you could hear members of my family thudding to the ground from Seattle, Washington to Homedale, Idaho. My mom had always wanted me to be a writer. Naturally, I immediately swore I'd never do anything that smacked of writing. Besides, it was against my religion to finish a job if I wasn't being paid to do it. Yet despite it all, I wrote a book. And then another. And another. And now, like it or not. I am a published writer.

Mom's gone now, yet I can't help but wonder sometimes if she wasn't the one responsible for peopling my house with strangers who kept nagging at me to write their stories. I suspect she is, and I also suspect she's having the last laugh.

See, I told you Jacquie Rogers is funny, didn't I? She can't help herself. You can read her blog at Romancing the West, http://romancingthewest.blogspot.com

Thanks for stopping by!
Posted by Caroline Clemmons at 1:01 AM

LOVE your story, JPQ! And yes, reading 100 books of any genre is a great lesson if you want to learn.

I hope you enjoy the book, Meg! Thanks for stopping by. :)

Thanks so much, Caroline, for such a great review...especially coming from you. I just loved Brazos Bride!