WHAT A TERRIFIC WEEK!


I am having such a terrific week and want to share it with you!

On Saturday, Jean Headen, a friend from Rockwall, Texas with whom I had lost touch until about two months ago, came for a visit and brought her cousin Anita. Not only that, Jean brought me an afghan she had crocheted in burgundy and white. She knew that I used a lot of burgundy in my Southwestern-style family room, and thought I could snuggle under the afghan this winter. It’s so pretty, I'n not going to simply put it away until next winter, but will leave it on the sofa’s back to show it off. Some people are so talented. Isn’t it nice of her to share her talent? Okay, I know that, technically, that Saturday was part of last week, but I'm counting it with my great week.

On Sunday, my friend and critique partner, Ashley Kath-Bilsky, invited our other critique partner, Geri Foster, and me to accompany her to the Jane Austen Society Tea at the French Room of the Adolphus Hotel in downtown Dallas. Ashley writes Regency novels primarily (although she has written a wonderful western time travel). I love Dallas and have always wanted to venture into the French Room. It was as smaller than I’d imagined, but even prettier.


The tea was wonderful, but not as pretty as the one Ashley set up for the Yellow Rose RWA members in March. Not everyone has Ashley's talent, and I shouldn't judge. The Adolphus servers did an excellent job. We dined on finger sandwiches, a scone, and a plate of tiny elegant deserts. Ashley, Geri and I chose Wild Blackberry tea. If you are up on teas, you know that berry tea is a tisane, but this had black tea mixed with it, so I can call it a tea.

Some of the Jane Austen Society members came in period dress. We were fortunate enough to sit at the first table and easily heard the presentation on the history of tea and how each type benefits us. I learned a lot, and one thing is I’m going to buy some Oolong Tea.

This was one of the most relaxing, lovely afternoons I’ve ever spent. What a treat, and I do mean treat, because Ashley bought the tickets and drove her car. All Geri and I had to do was relax and enjoy ourselves, and we did!


I was still savoring that experience on when Monday, Nelda Liles, a friend from Plano, Texas I haven’t heard from in ages, emailed me that she had read my blog (Yay!) on bluebonnets and told me how to plant them. In addition, she gave me some terrific bluebonnet photos and said I can use one for the cover of the third Men of Stone Mountain trilogy, BLUEBONNET BRIDE. Here’re a couple of her photos below, many of which she took along Ennis' (Texas) annual Bluebonnet Trail. Isn’t she a talented photographer? In addition, Nelda has a home staging business, and a home she staged was chosen to be shown on HGTV’s “My First Place.” Isn’t that a terrific coup? She has a unbelievable flair with home decor. 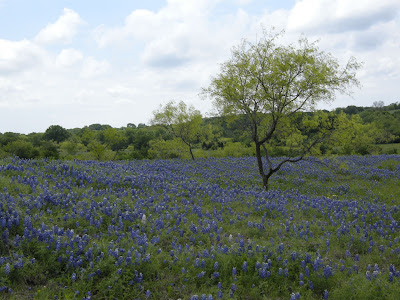 Tuesday I had lunch with friends after our church women’s meeting. I was even good and had a salad, although that chicken-fried steak really called my name. I'm finally losing some weight, and don't want to blow my diet in one meal. Meeting with friends is very good for us and raises our endorphins to elevate our mood as well as antidepressants. That's important for writers who work alone most of the time.

I hope each of you is having as great a week as I am!

Yes, you're right. I MUST concentrate on finishing my current work-in-progress, HIGH STAKES BRIDE, which is Zach's story. Going there now...

You did have a wonderful week. You probably also had so much to get inspired from.

Caroline -- I'm so glad you enjoyed the Jane Austen Tea. So happy you joined me; it really was wonderful to share the experience with you and Geri. I really want to find that Wild Blackberry Tea. :)))