REVIEW: MUCH ADO ABOUT MAVERICKS


Jacquie Rogers is a friend as well as one of my favorite authors. Her Hearts of Owyhee romances are laugh-out-loud fun with plenty of mischief and mayhem to keep readers turning the pages to discover how her characters tackle the next obstacle. MUCH ADO ABOUT MARSHALS and MUCH ADO ABOUT MADAMS are the first two in the series. This post is about Jacquie’s latest book, MUCH ADO ABOUT MAVERICKS. 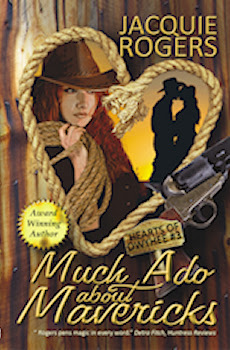 Benjamin Stoddard “Skeeter” Lawrence is an admirable and handsome hero for whom I cheered. But the heroine is one of my all-time favorites from any author. Janelle Katherine “Jake” O’Keefe is the only female ranch foreman in 1885 Idaho Territory. Jake runs a tightly controlled and highly efficient organization. Not only do her employees admire and respect her, they also like her. Well, all but Fred, who has a smart mouth, a lazy streak, and doesn’t like taking orders from a woman. There’s always one, isn’t there?

Ben Lawrence endured a miserable childhood, constantly belittled and bullied by his father, Ezra. When Ben was old enough, he was shipped off to Harvard. Now, thirteen years later, he has become a successful lawyer with the Boston firm of Morris and Graves. His boss, Creighton Morris,is dangling a partnership over Ben’s head as a lure to insure Ben weds Patience Morris. Although Ben knows he deserves the partnership without strings, he is contemplating marriage to Patience, but he hasn't yet proposed. Ben plans to take his mother, Mabel, and his sister, Suzanne, back to Boston with him. He should have known western women don’t like to have their lives organized without their consent.

When the book opens, Ben has returned to the Bar El Ranch near Henderson Flats, Owyhee County, Idaho Territory for the reading of his father’s will. Sad as it appears, no one mourns the demise of Ezra Lawrence, especially after hearing the ridiculous will he’s left. For separate reasons, Ben and Jake are angry at the will’s stipulations. Ben intends to contest the will, but something spurs him to fulfill the conditions set forth for him. Unseen forces are at work against Ben. Can he prove he’s strong and skillful enough to overcome the mischief and destruction designed to defeat him?

My reviews don’t include spoilers, so I can’t tell you more about this wonderful book. I can highly recommend you read MUCH ADO ABOUT MAVERICKS for yourself.  I give it ♥♥♥♥♥ hearts.
It’s available from Melange Publishing via Amazon:

Each of the books is stand alone, but I also highly recommend Jacquie Rogers's other Hearts of Owyhee titles:

Book one, MUCH ADO ABOUT MARSHALS 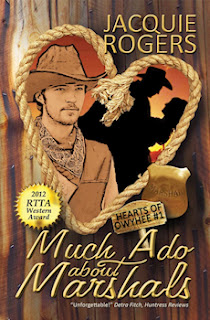 Set in 1885, Oreana, Idaho Territory. Daisy Gardner is a twenty-two year old spinster. Though she has nothing against marriage, Daisy does not want to wed to a rancher and end up stuck out in the sticks. She wants to be a female detective, just like Honey Beaulieu, the lead character in her favorite dime novel series.

Cole Richards runs a ranch on Sinker Creek. Two miners, Porker and Gib Rankin, have sluiced his ranch's creek into a muddy dribble. Cole makes the mistake of telling Bosco that if the bank in Silver City loans the miners any money, the ranch would then be in a world of trouble. Bosco, who is not too bright at times but is the best-hearted man Cole has ever known, decides to rob the bank of the miners' would-be money. While trying to stop Bosco, Cole ends up getting his leg shot by the female teller, Iris, and the duo find themselves on the run. After blacking out, Cole revives to find himself in the small town of Oreana and being sworn in as Marshal Sidney Adler. He cannot do much about the misconception except play along, or he and Bosco (who has been sworn in as a deputy) would be suspected of holding up the bank in Silver City. Cole plans to leave town as soon as his wound allows, but who should happen to be in Oreana than the Rankin brothers? Cole decides it is in his best interests to play marshal for a bit and find out what the miners are up to.

Book two, MUCH ADO ABOUT MADAMS 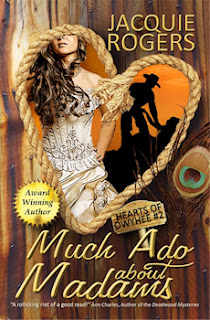 A suffragist schoolteacher with a hidden past arrives to teach,
Six shopworn whores cooking up plans for a better future,
And a hunky cowhand who inherited The Comfort Palace
isn't quite sure what to do with all these women...
Life isn't always comfortable at The Comfort Palace!


Jacquie Rogers grew up in Idaho, but now lives in Seattle, Washington. For a fun treat, read her complete bio at www.jacquierogers.com/bio

Thank you for the review, I'm looking forward to reading Much Ado About Mavericks.

All these books look wonderful. I have literally had no time for "pleasure reading" for the last 6 months, but that's one of my New Year's resolutions, and I am definitely going to read each and every one of these.
Cheryl

These do look like so much fun. Thanks for the review, Caroline. Jacquie, they are on my TBR list!