Heather will be awarding a $25 Amazon or B/N GC to a randomly drawn winner via rafflecopter during the tour.

The sweetest treat is a kiss…

Greggory Redcake's plate is full. Widowed young and left with two small children, the manager of the Kensington location of the illustrious tea shop is besieged on all sides between the bakery and family matters. If only his remarkably efficient shop assistant, Betsy Popham, could manage his home life, too! But Greggory can't linger on thoughts of Betsy's fetching smile when a dead body is discovered in the bakery…

Betsy has no time for romance, not even with the delectable Mr. Redcake, whose kisses are all too unforgettable. Haunted by a specter from her family's past, Betsy is terrified that the man blackmailing her has turned to deadly violence. Yet the only way to save her position--and possibly her life--is to accept Greggory's help as their delicious attraction sweetens into the tantalizing promise of true love… 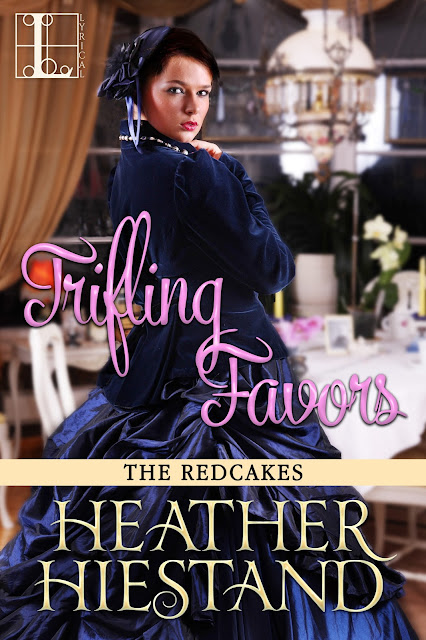 She nodded and left the room. Now, she was an employee who never had a slow-moving moment. She did the work of three of her counterparts, appropriate for someone, even young as she was, who had worked for Redcake’s since it opened, catching the notice of the owners. He’d heard rumors that she wasn’t as good as she ought to be, and might have entertained a fantasy or fifty that she’d show some of that reputed sexual fire to him, but it had never happened. Betsy Popham was the soul of propriety in his presence, and if she had ever been any different, he had never heard the details.

With a shake of his head, he returned to his perch at the window and stared out again. He really ought to tend to his reports, but the twins had earaches and had screamed through the night. The nursemaid had threatened to leave if she didn’t have at least five continuous hours of sleep, so he’d been up through the wee hours, rocking one baby while Mrs. Roach took the other. He ought to fire the nursemaid and find a new girl, but he just didn’t have the energy. While nursemaids were lower class than nurses, a good one had still proved difficult to find.

He’d never yet met a father who was so burdened with domestic concerns. Or perhaps, men like him were simply too tired to discuss it. Men like him weren’t relaxing at their clubs telling tales; they were at home tending their crises.

Heather Hiestand was born in Illinois, but her family migrated west before she started school. Since then she has claimed Washington State as home, except for a few years in California. She wrote her first story at age seven and went on to major in creative writing at the University of Washington. Her first published fiction was a mystery short story, but since then it has been all about the many flavors of romance. Heather’s first published romance short story was set in the Victorian period, and she continues to return, fascinated by the rapid changes of the nineteenth century. The author of many novels, novellas, and short stories, she has achieved best-seller status at Amazon and Barnes and Noble. With her husband and son, she makes her home in a small town and supposedly works out of her tiny office, though she mostly writes in her easy chair in the living room.

Heather will be awarding a $25 Amazon or B/N GC to a randomly drawn winner via rafflecopter during the tour.

Loved the cover and excerpt.

Thank you for participating in this great Blog Hop. It has been soooo much fun, and that's how I found your site!! Such a great idea. I will be going to check out your book on Amazon next! Thanks Again!

Enjoyed the excerpt, sounds like a fantastic read, thanks for sharing!

Really great post I enjoyed reading the excerpt! Thanks for sharing :)

Thanks for another great excerpt!

A great excerpt thank you.

Great excerpt! Thanks for the chance.

Thank you for sharing with readers, Heather.

Back again today to check out your books! Thanks for the great site and new books for me to read. I did have a question - How did you get your start in writing?? Thanks!!

Hi Kristina! Thanks for stopping by. I don't remember choosing to start writing. I wrote my first story when I was 7! In terms of being published, I was chosen to be part of a Sisters in Crime anthology with a mystery short story about 12 years ago. That was my first sale.

7?? Wow, That is AMAZING! I'm going to have a blast going through you books!

I Shared on Facebook Today Thanks for the giveaway https://www.facebook.com/linda.buzardmoffitt/posts/1126114140752541