HOW ISLE OF FANGS CAME TO BE

When I decided to write a vampire series, I wanted to create something a little different from the multitude of vampire stories on the market. One thing I did was to go back to traditional lore, such as…
My vampires…
Cannot go out in the sunlight, not even with magic rings or any other tricks
Do not sparkle
Cannot see their reflection
Cannot procreate
Are weakened by garlic, holy water, and crosses
Sleep in coffins
I created a main character/protagonist, a young woman, who is a descendant of Van Helsing, the vampire hunter. Lastly, I decided to set my story on a tropical island. I have had SO much fun with that. In researching which geographical area to use, I settled on French Polynesia due to its beauty, proximity to the United States, and uniqueness. I learned tons of interesting facts, some I’ve been able to use in the books, some I hope to use in future installments.
It's tradition to place a tiare (Tahiti’s national flower) behind your ear--left side means you're taken, right means you're looking. (I used this in Book 2 and the excerpt can be found below)

There are no poisonous snakes or insects in French Polynesia.

Outside the homes of locals, you will find boxes that appear to be for mail, but they are actually for French bread delivery. Residents get a fresh loaf dropped off twice a day. But alas, they must go to the post office to retrieve their mail! (I used this in Book 3)

The over-water bungalow was invented in the 1960s in French Polynesia, on the island of Moorea.

The official languages of the islands are Tahitian and French, however, English is widely spoken on most of the islands. (FUN fact: I wanted to create my own island, so I made up a name: Sang Croc – In French, ‘Sang’ means blood and ‘Croc’ means either crocodile, or fang – So, it more or less translates to ‘Blood Fang’ J

More than half of the population of Tahiti is under the age of 20 years old.

The word tattoo originated in Tahiti. The legend of Tohu, the god of tattoo, describes painting all the oceans' fish in beautiful colors and patterns. In Polynesian culture, tattoos have long been considered signs of beauty, and in earlier times were ceremoniously applied when reaching adolescence.

Blurb for Liberty Awakened – BOOK 1:
Liberty Delacort doesn't believe in Vampires. Then she meets the father she never knew, just before his death, and learns she's the last of the Van Helsing bloodline.

Eli, a 300 year old Vampire, doesn't believe Liberty has what it takes to stand between the humans and the Evil Ones on Sang Croc Island, and orders her back to the mainland.

Ryan, a friend of Liberty's late-father, disagrees and insists that Eli provide the promised training.

Now the Full Moon has come and Liberty must stand in the gap. But unbeknownst to her--she's fallen for the wrong vampire.

Excerpt from Liberty Divided – BOOK 2:
Just before they reached the parking lot, they passed a tiare shrub blooming with white flowers. "These are gorgeous." Liberty inhaled the fragrant scent. "And they smell amazing." She turned a delighted smile on him. "Can I pick one?"

"Of course. The natives of Sang Croc want people to enjoy the beauty of their flora. The motto is, there are always more to grow." Eli stopped and gripped a flower by its stem, pulling it from the bush. "Here you go."

She hadn't realized he'd moved, but suddenly he was close. Their bodies almost brushed. She didn't remind him of the rules about no flirting. If she did, she was afraid he'd step away. He locked his eyes on hers and lifted the flower, gently tucking it behind her ear.

She swallowed hard and took a shallow breath. His eyes dropped to her mouth. Involuntarily, her lips parted.

He was going to kiss her... and she was pretty certain she going to let him. Even in her drunken state, she vowed she wouldn't go as far as she'd wanted to go with Ryan. But she wanted to kiss Eli—had wanted to since she'd first seen him.

They'd come close a few times, but something had always interrupted them. Tonight, there were no distractions. She'd had enough to drink that she didn't feel her normal inhibitions. But she couldn't use the booze as an excuse. Her adrenaline was pumping, and she'd sobered considerably. Would she or wouldn't she? Would it be disloyal to Ryan? They hadn't exactly made a commitment, she hadn't told him she—

"Are you and Ryan a couple?" Eli asked.

She blinked, not sure she'd heard correctly. "Do what?"
"Are you and Ryan a couple?"

"I need you to tell me that you are."

She frowned and put a hand to her forehead. "What?" He wasn't making any sense, and her head was fuzzy.

He stared down intently at her, his gaze roaming over her features. His voice was low in the hushed night. "If you say you're not, I'll do something stupid. If you belong to Ryan, tell me you do, and hands off."

She didn't answer. For several seconds.

His lips tightened. The two of them remained sheltered in silence in the darkness. It was so quiet, she could hear the ocean waves lapping the sand.

He took the flower from her right ear and moved it to her left. He trailed his fingers along her cheek, making goose bumps break out over her flesh. "There you are. Left side."

"Left side?" Her throat was so dry, she could barely speak.

He nodded. "It means you're taken. Now all the guys will know you belong to Ryan, and they'll stay away."

She clenched her teeth, angry at herself for feeling disappointed, angry at him for not giving her what she wanted. Rejected by two guys in two nights. 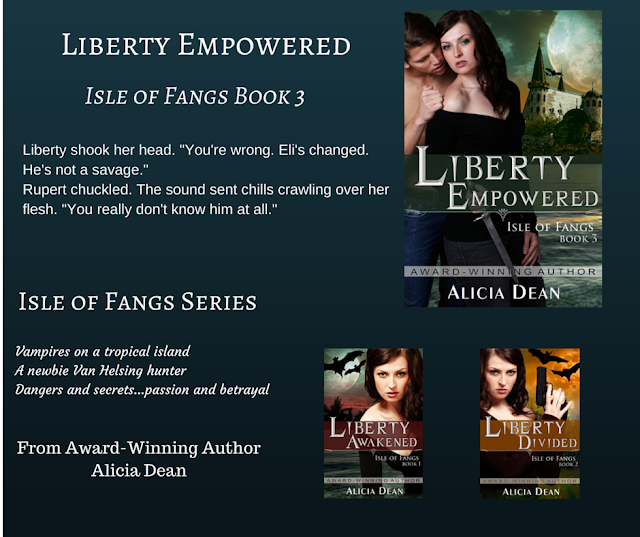 Amazon Buy Page for all 3:
http://www.amazon.com/s/ref=nb_sb_noss?url=search-alias%3Dstripbooks&field-keywords=Alicia+dean+isle+of+fangs

Award-winning author, Alicia Dean, began writing stories as a child. At age 11, she wrote her first ever romance (featuring a hero who looked just like Elvis Presley, and who shared the name of Elvis’ character in the movie, Tickle Me), and she still has the tattered, pencil-written copy. Alicia is from Moore, Oklahoma and now lives in Edmond. She has three grown children and a huge network of supportive friends and family. She writes mostly contemporary suspense and paranormal, but has also written in other genres, including a few vintage historicals. She is a freelance editor in addition to being an editor for The Wild Rose Press.

Other than reading and writing, her passions are Elvis Presley, MLB, NFL (she usually works in a mention of one or all three into her stories) and watching (and rewatching) her favorite televisions shows like The Walking Dead, Dexter, Justified, Sons of Anarchy, Haven, Vampire Diaries, and The Originals. Some of her favorite authors are Michael Connelly, Dennis Lehane, Lee Child, Lisa Gardner, Sharon Sala, Jordan Dane, Ridley Pearson, Joseph Finder, and Jonathan Kellerman…to name a few.

Thank you for hosting me today, Caroline!

Oh wow, how interesting!
I certainly enjoyed learning how you created something different in your books.

Good luck and God's blessings with them.
PamT

What a creative island name. I love it and the excerpt is intriguing. I can totally identify!! Thanks for sharing. :-)

Very interesting! It sounds like your research was fun. Enjoyed the excerpt. My vampires aren't at all like yours, but they do not sparkle!

Thanks, Pamela. It's been a lot of fun.

I appreciate it, Casi. I always enjoy naming my towns (or islands) something connected to the story. :)

LOL, Linda. Yes, your vampires are very different from mine, which is good, right? And, kudos on the no sparkling. :) Thanks for stopping by!

I love that they get French bread delivered to them twice a day! Sounds like heaven! And it's funny they have to go get their mail. Enjoyed your post very much and the excerpt was awesome, too!

This is my favorite Vampire series! I really enjoyed reading more about how you came up the the idea. I especially like your list of what they can and cannot do!

I'm with Darcy. This is my favorite vampire series as well. It's fun and the world you have created fascinates me. Now I see why! What cool facts!

I know what you mean about researching your characters' locale and traditions and,for me, their history. I use only a fraction of my findings, but learn so much in the process. Good luck with this and all your projects.

I love that too, M.J. Can you imagine? Thanks so much. Glad you enjoyed!

Aw, thank you, Darcy. I am so pleased and honored you're a fan of Isle of Fangs! :)

And thanks to you, Leah. That means a lot to me. YES, I love all the things I've learned researching this series.