HER SECRET COULD CAUSE HER DEATH!

MARGARITA AND THE HIRED GUN Blurb:

Pampered Margarita McIntosh is not used to being forced to do things she doesn’t want to do—but when her father, Jock, sends her away for her own safety, she has no choice. The long journey from Flagstaff to Durango tests her personal strength of will as never before, and the secret she carries in her saddlebag could be the death of her.
A rough Irish gunman, known to her only as “Rafferty”, is entrusted with getting her to her destination “safe and intact”—something he fully intends to do to claim the reward he’s been promised by Jock McIntosh. With a price on his head, the promised money is Rafferty’s ticket to a new life, and he’s not going to jeopardize that for anything—not even love.
But there are steamy nights and dangers all along the arduous trail for MARGARITA AND THE HIRED GUN, with deadly secrets between them that passion cannot erase. With her father’s enemies after her and the secret she conceals, will Rafferty’s protection be enough to save their lives? And will the heat of their passionate love be enough to seal their future together—if they do survive? 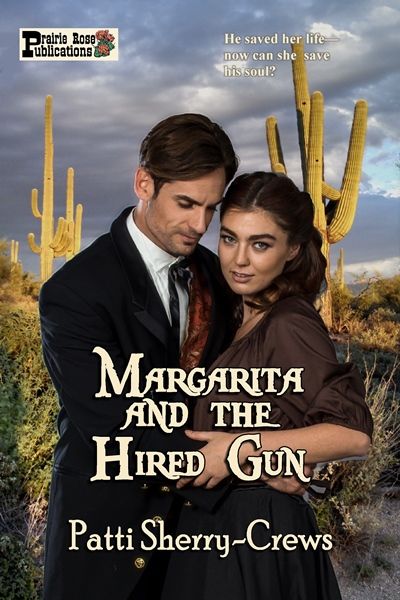 MARGARITA AND THE HIRED GUN Excerpt:

Margarita’s attention was drawn to the stairs again. A man in a fancy brocade waistcoat under a black jacket was making his way down the stairs. He had long silver hair and a mustache curled up at each end, defying gravity with the aid of mustache wax. Catching her eye, he tipped his hat to her.

“He’s older than I expected,” she whispered to Homer, who turned to look over his shoulder.

“That ain’t him,” he said, as the gentleman joined the card game in progress.

After a beat another man appeared at the railing overlooking the saloon.

He was a tall man with black hair. Leaning on the railing, with his arms stretched out at full span he took in the room below with a predatory gaze. He was powerfully built with broad shoulders and long limbs. Like a bird of prey, he held his head still while his eyes shifted around the room. Margarita felt like he was deciding which one of them he would swoop down to pick off first.

Although nobody moved, there was a change in the air. It felt like the very air grew hot and dry in his presence, charged with a heaviness that wasn’t there a minute ago.

When he saw Homer the man’s eyes came to rest for a second. Then his eyes shifted and met with hers. He lifted his eyebrows in surprise, fixing her with such an intense stare; Margarita slunk back in her seat.

“Rafferty,” said Homer, nodding his head in the direction of the man, who was now moving toward the stairs, eyes still on her.

He walked slowly, swinging one long leg after another, a slight swagger in his shoulders.

Unable to bear up under his direct gaze any longer, Margarita looked down at her coffee. Her ears were burning and her throat was constricted in anticipation, but still he moved down the stairs and across the room at an unnervingly slow pace. When he arrived on the scene, the women at the table stopped talking and looked expectedly at him. He didn’t register their presence as he walked past them to their apparent disappointment.

The men playing poker watched him with wary eyes. One of them touched the gun in his holster, nervously.

The cowboys stopped talking and drew closer together.

Without a word or invitation the tall man pulled out the chair across from her. The gun sticking out of his waistband put a lump of fear in her stomach.

He jerked his head in her direction, looking at Homer. “Why is she here?” he asked in a deep voice, speaking in the same slow pace as he walked. He had an Irish accent, she noted.

Homer poured out a cup of the thick, dark liquid for him. “Rafferty. This is Margarita McIntosh, Jock’s daughter.”

“And she’s here for what reason?” he asked, again in a brusque tone.

Margarita looked up, her face burning with indignation. She was met with quite a sight.

The man across from her had a few days growth of black whiskers covering the lower part of his face. Jet-black hair stood in loose curls around his head in an uncombed mass. His hair was in need of a wash, strands clumping together with something she didn’t want to dwell on. It was hard to guess his age. Older than she, certainly, but she couldn’t discern much beyond that.

He was without a jacket or shirt, and his long john’s undershirt was pushed up at the elbows, showing long, muscular forearms. Worse, the top buttons of his shirt were unbuttoned, exposing the patch of black hair on his chest. The tight, sweat-stained garment showed every bulge and indent in his lean torso, including his nipples. He was as good as naked. Margarita tried to hide her shock at this unseemly display. She’d never seen so much of a man’s body before so close up.

His eyes bored into her. They were steely eyes the color of indigo set in bloodshot orbs. Her discomfort seemed to amuse him. He narrowed his eyes at her, a smirk forming on his lips as he observed her observing him. Other than his lips and eyes, he was as still as if he’d been carved in stone. Very economical in his movements, Margarita observed.

“Well, here’s the thing. She’s the job. Jock wants his daughter delivered to his sister in Durango. He wants you to make sure she gets there. Safe--and intact,” Homer said in a way, which embarrassed her.

Patti Sherry-Crews lives with her husband, two children, a bad dog, and a good cat in Evanston, IL. She studied anthropology and archaeology at Grinnell College and the University of North Wales, UK.

Whether it is because she watched too many western TV shows with her grandmother or because her bag of cowboys and Indians was her favorite toy, Patti also writes historic western romances. MARGARITA AND THE HIRED GUN is with Prairie Rose Publishing and came out April 2016. Patti has two novellas out now in anthologies by the same publisher.

Thanks for sharing with us today, Patti. I look forward to reading MARGARITA AND THE HIRED GUN.

Thanks for giving me a space today. I had this on the calendar of course, but I thought today was Tuesday all day! It was a nice surprise to see Margarita and Rafferty/Jack on Facebook. I've so enjoyed getting to know you!