Please welcome my longtime friend and a bestselling author, Sylvia McDaniel. Sylvia has a giveaway to someone who comments. Commenting also enters you for the Kindle Fire 7 giveaway on Christmas Eve!

What is your favorite childhood Christmas memory?

When Santa brought me my bicycle. We lived in a small house in San Angelo and had gone to my grandparents. I didn’t think I would get a bicycle that year, but I was surprised. I had to be 5/6 years old.

What is your favorite adult Christmas memory?

The first year my husband and I went to Christmas Mass - we weren’t even married, but that night, I knew he was the one.

Is there a Christmas song that’s your favorite?

A.   Secular — The one by the Carpenters – “Merry Christmas, Darling” — makes me cry every time I hear it.
B.   Religious — “Oh Little Town of Bethlehem”

Tell us about your family’s Christmas traditions.

We’re an odd bunch and really don’t have many. My grandmother, my mother and myself use to give our presents to each other in the same box. One year I received it, the next year my mother, then my grandmother. We passed that box around until it fell apart.

What about Christmas do you most enjoy?

My family has shrunk tremendously, though I love being with them, my favorite parts are the decorations and the lights. I think it’s because when I was a kid we would spend Christmas Eve driving around looking at the lights.

Is there something about this holiday that drives you crazy?

People at the mall.

What do you hope for this Christmas?

My year is crazy this year and it’s going to be a quiet Christmas. I’m praying for less stress and for Spring to get here quick. As for a gift…I’d like a smaller lighter Apple laptop computer from Santa.

1 8 oz Cream Cheese
1 Flat can Crushed Pineapple drained very well —this is the most important step
1/2 Cup Bell Pepper chopped fine
1/2 Tablespoon Seasoning Salt
2 Tablespoons onions minced
1 1/2 cup chopped pecans
Let the cream cheese soften then squish all this together except for the pecans - then chill the cheese ball. Once it’s firm again, roll in the chopped pecans.
If you like it spicy - add finely chopped Jalepeños.

I'll give away a copy of CUPID SANTA!

Determined to find her perfect match, Brie Simpson sets out for Cupid, Texas to test the superstition of dancing naked around the statue and discover true love. Only, to learn destiny betrayed her when she gets handcuffed and hauled to jail.

After complaints about the silliness of people dancing naked around the statue, Deputy Stephen Austin doesn’t believe in the magic of Cupid with good reason. When he finds himself in a jam, with no one to help plan the annual Christmas party, he’s forced to turn to his prisoner.

Can Cupid help a pessimist and a perfectionist come together for the sake of the children and save Christmas? 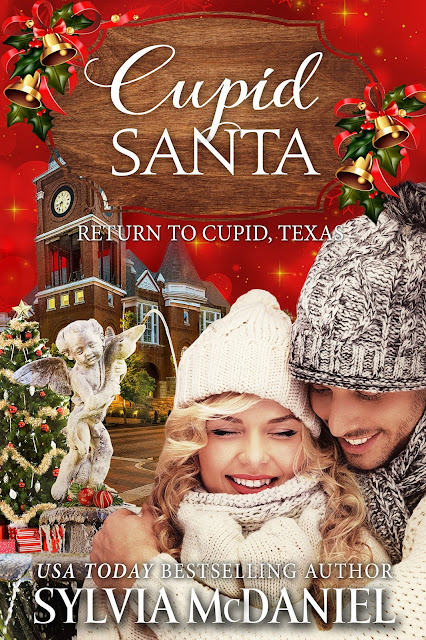 Brie glanced around the town square at the boy in a diaper with his arrow drawn back. What was a practical, logical woman like herself doing standing naked in a park waiting for the clock to strike the dancing hour? Never one for crazy stunts, she feared if seized by the law, her friends and family would assume she finally went off the deep end.
Her luck with men was like a bad hand of craps in Vegas. Lucky seven appeared at the wrong time. Sure, this was a superstition. One that could find her looking out between bars.
But the numbers of couples who admitted to having met because of the Cupid Stupid run proved something about this dance brought people together. Enough people, that here she stood in her birthday suit, hoping the man she encountered would accept her plus size body.
The clanging gong struck midnight, the ding dong resounding through the park. Ready to get this process started, she began to jog, shivering in the cold as she chanted the words the legend required you say. "Oh Cupid, find me my true love. Oh Cupid, find me my true love."
According to the superstition you had to make it around the boy in the diaper at least three times, more if you were desperate. At the ripe old age of thirty, even the sixty-year-old janitor in her building looked appealing. Eager to marry and have the family she dreamed of, she was willing to risk it all tonight.
On the third lap, she spotted a figure coming around the statue and sped up.
"Stop," he called. "Halt."
Taking a glance behind her, she detected a man dressed in a Santa suit chasing her and busted out laughing.
"Stop, I'm the law."
"Law? Where's your badge and gun?"
The jolly old man huffed and puffed. Seemed Santa skipped the gym lately.
"Deputy Stephen Austin."
The father of Texas? Sure, and she was Pocahontas.
“And I’m Barnie Fikes. Leave me alone, I'm finding true..."
Stunned, she stopped, staring at the man running toward her. "Oh my, you're my true love. But you're old."
As he ran up to her, he slapped the handcuffs around her wrist.
"I'm your worst nightmare. You're under arrest for public indecency," he said.
His hat fell to the ground and she saw that he wore fake whiskers and his hair was a dark brown.
"Wait, I'm your true love," she said. "No, you can't arrest me."
"Watch me," he said. "Santa is taking you to jail."
"I knew I should have gone to Bride, Texas," she said with a sigh.

Married for over twenty years to her best friend, they have one dachshund that reigns Queen Supreme over the house, a new puppy who is challenging the queen and a good-looking, grown son who thinks there’s no place like home. She loves gardening, hiking, shopping, knitting and football (Cowboys and Bronco’s fan), but not necessarily in that order.
Sign up for Sylvia’s newsletter
Follow Sylvia on twitter
Join Sylvia on Facebook

Hello Sylvia, your Christmas tradition with the box is unique I think it's sweet that you your mom and grandmother all shared a box. Also, Cupid Santa sounds like a great book. Happy holidays.

Sylvia, thanks for sharing with readers today. Wishing you a Merry Christmas and continued success in writing.

My recommendation would be: The Christmas Letter: A Cozy Mystery (A Tess and Tilly Cozy Mystery Book 1) by Kathi Daley. Your books sounds fun too.

My hubby will love this cheese ball recipe. Thank you. Merry Christmas!

I love Christmas related books, this one sounds like it will have a lot of laughs in it. Thanks for hooking us up with new writer's .

Roxane Twisdale, you are the lucky winner. Send me your email address and I will send you an ebook. Thanks everyone for stopping by and thanks Caroline for having me.