AN AGENT FOR JUDITH! #newrelease #CarolinClemmons 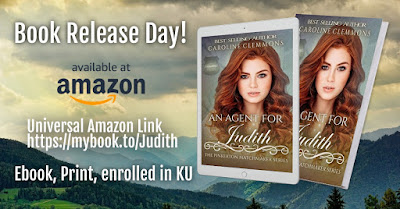 That’s correct—today is release day for AN AGENT FOR JUDITH, Pinkerton Matchmaker Series, book 79. I love this series and hope you do, too. This one is set in an area to which my husband and I love traveling, northern New Mexico.

Here’s the blurb for AN AGENT FOR JUDITH:

Judith McAdams has vowed to rescue her brother. Peyton Knight is determined to protect his group. Together they must outwit a cruel and powerful man.

Judith’s brother in New Mexico hasn’t been heard from since a letter saying he was being bedeviled by a neighbor who wanted his ranch. Judith wires the marshal to check on her brother. When he refuses, she goes to the Pinkerton Detective Agency in Denver. There she learns that as a civilian she can’t accompany a Pinkerton agent on a case. However, if she marries a Pinkerton agent she can become an agent.

Peyton values his job as a Pinkerton agent and is good at being a lawman. To keep the job he reluctantly agrees to a marriage of convenience with Judith. Together they will go to her brother’s rescue. Peyton is impressed with the beautiful and spirited redhead—if only she would admit he knows best. He even admires his mother-in-law but how did he end up with her on their trip? At least he’s found three men he trusts to help him rescue the brother.

Their journey is filled with obstacles. Will Judith’s brother still be alive by the time they reach him? When they resolve the ranch issue, will Judith and Peyton part ways?

AN AGENT FOR JUDITH is a sweet western historical romance.

The Universal Amazon Link is https://mybook.to/Judith.

For those afraid of shortened links, the Amazon link is https://www.amazon.com/Agent-Judith-Pinkerton-Matchmaker-Book-ebook/dp/B088HCL5WP/

Judith sat with hands folded in her lap in what she hoped appeared a patient pose. Inside she wanted to rail at the man to hurry. Her brother could be injured and dying as she sat here. She believed Josiah was still alive because she was certain she’d know in her heart if he had passed away.
Finally, Mr. Gordon pushed aside the papers. “What is it you want us to do, Miss McAdams?”
“I want to hire one of your agents to accompany me to the ranch and see what’s happened to my brother. If this bully of a neighbor is creating trouble, I want him arrested.”
“Accompany you?” He shook his head. “Sorry, but we don’t allow civilians on our cases, Miss McAdams.”
“I’m the client, Mr. Gordon. My brother is my only living relative and I insist on going with whomever you send. I assure you I’m quite competent in hunting with gun and bow and can even throw knives with precision. I’ve spent time camping and know how to track as well as any Indian or scout.”
“Hmm. In that case, you should become an agent and marry him. I won’t have a man and woman traveling together in conditions that would ruin your name or put you in danger. The marriage is a paper one that you can have annulled after the case if you wish.”
Good thing she was sitting because that knocked the floor from under her. She was glad she hadn’t mentioned Abigail yet. She sorted her thoughts before replying.
“Becoming an investigator does appeal to me. I believe I have the skills needed to be a good agent.” She shook her head. “But, marriage to a stranger? I’m not sure.”
Mr. Gordon rested his hands on the desk and met her gaze. “Those are my conditions.”
She rose and paced back and forth in front of his desk. “It would only be on paper? You’re sure I can get an annulment?”
“I am. The official who performs the wedding grants the annulments for those who wish them. I might add that most choose to remain married.”
“Hmph, I can assure you that I won’t.” She resumed her seat. “All right, I seem to have no choice but to agree to your conditions. Who is this agent you wish me to marry? I hope he’s your very best investigator and quite strong.”
Mr. Gordon signaled to someone behind her. “Send in Peyton Knight.”
Soon a handsome man strolled into the room. He was above average in height—likely several inches over six feet—with dark hair and blue eyes. His wide shoulders gave the appearance of strength in spite of his trim waist.
“You wanted to see me?”
“Have a seat. Miss Judith McAdams, may I introduce Peyton Knight? Peyton, Miss McAdams has come to hire us to help rescue her brother in New Mexico Territory.”
Peyton nodded to her and took a seat. “What part of the state and what kind of trouble is he having?”
Archie slid the letters into a large envelope. “I’ll let her tell you after your wedding.”
Peyton jumped to his feet. “What! Archie, I told you I don’t want to get married right now.”
He looked at her. “No offense intended, Miss McAdams. When I do marry, I’ll choose who I wed.”
The director sent him a stern stare. “Calm down. You know this will be a marriage on paper only, and your bride will be going along as your partner. If you plan to continue as a Pinkerton agent, that is.”
Peyton stabbed a finger at him. “You know danged well I do. You also know I don’t want a woman partner to babysit while I’m on a case.”
Judith stood up. “Babysit? I’ll be the one babysitting. I can out shoot, out hunt, and out track you any day. No one has to babysit me. In addition to going as an agent, I’m also the client. So, if I agree to marry you—a big if—then you’ll be working for me, understand?”
He tapped his chest. “I work for Pinkerton Detective Agency and I take my orders from Archie Gordon, not some prissy redhead.”
Archie put two fingers to his lips and whistled. “Stop this. You can continue this discussion after the wedding while you’re on the way to New Mexico. Right now, Peyton, go pack your gear. You’ll be going as a wealthy man looking to buy a ranch. Get outfitted as such.”
Peyton glared at his boss then stomped from the room, muttering under his breath.

I hope your interest is piqued. I love this story and hope you will, too!

I'll be giving away a $10 Amazon gift card to someone who comments today. Be sure and leave your email in case you're the winner.

Sounds exciting and I enjoyed the excerpt.

This sounds like a fun book. Marriages of conveniences make for so much intrigue.
debby236 at gmail dot com

What a great sounding book I would love to read.