CAST IN STONE -- TREASURES OF THE HEART SERIES

Don't forget the Rafflecopter giveaway at the end of the post! 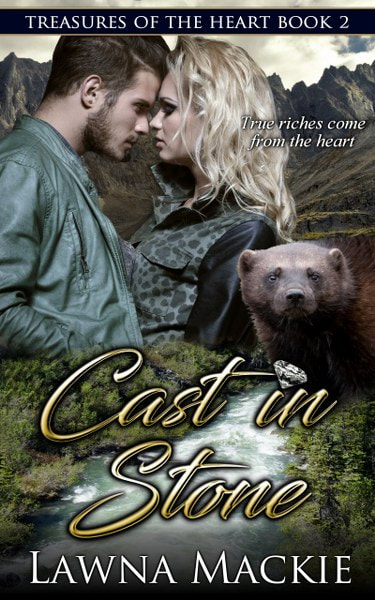 Emma Taggart is a headstrong determined woman who knows exactly what she wants. That would be Finn Avery—not because he’s a multimillionaire with a mountain of gold—literally, but because all her life she’s had a crush on him. He also happens to be her best friend’s brother.

When Emma finds herself in the small town of Dawson City, Yukon, for a second time, she realizes the beauty of the wilderness has grown on her. Granted the place is a far cry from the glamorous city of Chicago. Her job was to film and produce a special story for a prominent Chicago fashion magazine. It seemed a perfect way for her to spend time with Finn.

Trouble begins when Finn’s best friend and partner passes away. Finn blames himself for the death and turns away from those who care. Emma knows he cares for her, the heated moments spent together spoke the truth, but now she can’t seem to break through to him.

When a pompous billionaire, Marco Bishop, comes parading into town offering to buy the Charlie Avery Gold Mine, Finn is furious. The man has little respect for the town and its heritage, even worse he has come to fancy Emma and is determined to have her as his next conquest. Not only does Marco want the gold mine, but he’s certain he knows where to find diamonds. Marco persuades Emma to take a day trip with him up into the mountains, but by the time she realizes there is more to his plans, she knows she’s in terrible trouble.

Finn suspects Emma has been taken against her will. He is determined to find her and bring her home. It’s another adventure into the brutal wilderness, where the rivers are as wild as the animals they encounter.

Along the way Emma, Finn and Groot…the baby wolverine…yes, a baby wolverine, discover some interesting clues cast in the stones. Finn refuses to let anything happen to Emma but wonders if it might be too late. His great-great uncle once wrote—true treasures come from the heart.

Not one cloud danced in the bright blue sky, and the golden sun reflected the magnificent jade colored water below.

“I’m not scared.” She placed her hands on her hips. “I just don’t want to get my hair wet,” she stuttered through the lie.

Finn’s eyes danced over her five foot six toned, tanned body. Perfect from head to toe. Her shoulder-length blonde hair bobbed at her shoulders with every move she made.

From way below in the water came a voice. “Come on, Em. Jump.”

It was Finn’s sister Samantha, beckoning from the swirling pool.

“I’m going to kill her for this,” Emma seethed. “Just wait till I get my hands on her.” She stomped closer to the edge.

Finn followed. “You know you want to.” He smirked at her angry glare.

She turned and stared at him. “All right,” she responded. “I’ll go if you go.”

He lost his smile. “I don’t have my trunks on.”

“You don’t need trunks. Just wear your briefs,” she said with a conniving smile.

“I’ve done this a hundred times. I live here, remember?”

“Maybe you’re the one who’s scared,” she countered.

“Don’t be ridiculous. I’m not scared,” Finn ground out.

“You really are a vixen, you know that?” He unbuttoned his jeans, kicked off his shoes and approached the edge. “I’m too old for this.”

“You’re not too old. I’ll follow if you go first.”

“I can’t believe I’m doing this.” Finn stood looking over the edge down at the mighty Yukon River.
“You better keep your end of this bargain, Emma Taggart.”

“I will.” She nodded while Finn watched her eyes travel over his body.

Finn turned and jumped from the ledge. His body hit the water and plummeted into the cool depths of the river, never hitting bottom. Slowly, he began the ascent toward the surface, happy for air he gulped into his lungs.

His sister Sam squealed with excitement while she treaded water. “I can’t believe you jumped.” She smiled at him.

“She goaded me into it.” He pointed up at Emma.

He spied her up above chewing on her finger. “Come on scaredy cat,” he shouted, knowing she’d be angry.

From over on the shore just a bit downstream stood another man watching them. “How’d he get out of this?” Finn glared at Sam.

“If Hunter jumped off the ledge Savage would follow.” She shook her head.

“Yes, really. He’s a tough wolf, but he’s still recovering from his injuries.”

“Thank heavens for Savage.” Finn smiled at her.

On the ledge Finn watched Emma turn and walk away. “I’m going to kill her if she doesn’t get that body of hers in this water.”

“I don’t know if she will.” Sam shook her head.

To their surprise Emma returned to the ledge holding something in her hands.

“What? She wouldn’t.” Finn stared up at her in disbelief as she dropped what was in her hands over the edge, then plugged her nose and jumped.

“That little…” Finn watched his pants and shirt fall to the water. “Damn her!”

Emma screamed the whole way down until her body plunged under the surface.

Samantha laughed while Finn managed to rescue his pants and shirt before they sank.

Emma broke the surface sputtering and coughing. “Ouch!” she yelled. “You didn’t tell me to hold my arms in,” she ground out. “It feels like a belly flop but worse.”

Finn swam toward her with his wet clothes in hand. “If you think that hurts wait until I get my hands on you. Your butt will have my finger imprints all over it,” he shouted back.

Finn watched her gracefully break into a front crawl and pull away from them. “Get back here you little brat.”

“Fun times.” Sam laughed, making her way toward the shore.

Interview with one of Lawna Mackie’s characters from Cast In Stone, book two in the Treasures of the Heart series.

Interviewer: I can honestly say that I’ve never interviewed someone like you before. Why don’t you go ahead and introduce yourself to the readers out there.

Groot: I’m Groot. I’m happy to be here. My mom, Emma told me I had to behave myself. *He lays down licking his paw.*

Interviewer: Well I think you’re behaving very well. Groot why don’t you tell the readers what kind of animal you are and how you met Emma who is one of the main characters in the book.

Groot: *Gets up pacing around the room* Oh…I’m a wolverine. I’m not very old yet. Emma saved me from drowning. One night I was with my real mom and my brother and sister, we are called kits, when we heard a big rumble. Trees started falling and the boulders came rolling down the mountain. My real mom tried to get us out of the den to safety but she couldn’t. *He pauses lowering his head* Next thing I remembered was flying through the air and landing in the river. I tried my best to keep my head out of the water, but my leg hurt bad. Then I ran into the logjam and struggled to hold on but the water was so powerful. It was sucking me under. That’s when mom, Emma helped me out and onto the shore.

Interviewer: That sounds terrifying Groot. I’m so terribly sorry for your loss.

Groot: I was so scared and cold. My leg was bleeding and I didn’t know what a human was, but I didn’t want to be left alone. I missed my real mom and other kits. We couldn’t find them.

Groot: She helped with my leg and fed me. Now she’s my Mom.

Interviewer: Is your leg still sore? It looks uncomfortable.

Groot: *Shakes his head* Sometimes it aches but it’s okay. It’s deformed the doctor told me. I would have drowned if Emma didn’t help me and I was too little to be alone.

Interviewer: Groot you are adorable. I’m glad Emma saved you.

Groot: I’m really glad. We had an adventure and I was really unhappy when the bad guys kidnapped my mom.

Interviewer: That’s sounds horrible! But I’m glad she was okay. Groot it has been a pleasure speaking with you. I can’t wait to read more about your adventures in the book Cast In Stone. Thank you Groot! 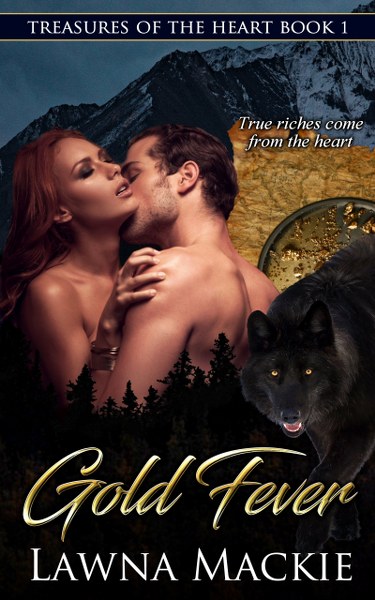 Could it be true? The gold existed. A treasure map alluded to such a find, but for over a century it was rumored a fable, one told by an old crazy man—Samantha (Sam) Avery’s great-great-uncle.

One huge problem existed. Her brother Finn sent her the map and told her to run. Sam knew her big brother was in trouble and she had to help him.

In Dawson City, Yukon, Hunter Gray, outfitter and guide had been hired to do a job. At the airport, pick up a Sam Avery and take him to the old Charlie Avery cabin up the mighty river.

What Hunter Gray hadn’t expected was for Sam to be a Samantha, who wore fashion designer shoes, had a sharp tongue and a goddess-like appearance—the vast wilderness of the Yukon was no place for somebody like her.

Sam had to learn quickly. How hard could it be to ride a horse and live without running water and restaurants for a week? It didn’t matter, her brother needed her and Sam had to convince the ruggedly handsome man and his wolf… yes…wolf, that she was up to the adventure.

Spending night and day together, Samantha knows the attraction between them is growing quickly. Not only is Samantha determined to rescue her brother, but she must now save her heart from a man who doesn’t believe in love.

I'm a small town girl with big world dreams. I was born in Jasper, Alberta, and my parents were outdoor enthusiasts. My dad was an avid fisherman and I'm certain my mother was Mother Nature.

The love of my life is my husband. He, along with my animals are my inspiration for everything I write.

I live for romance, and truly believe true love conquers all. From an early age you could always find me with my nose buried in a romance novel--that hasn't changed. I write various forms of romance from contemporary, paranormal and fantasy to erotica.