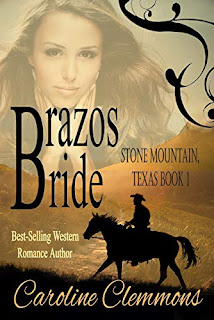 One of the things readers ask writers is where we get our ideas. The general answer is everywhere. Specifically, the idea for the Men of Stone Mountain TX came to me when my husband and I were on the annual (at least, at that time it was) Palo Pinto County Historical Society Tour. This driving tour included several stops for talks or inspection. From the county seat of Palo Pinto, State Highway 4 winds through pretty hills and valleys. There were several spots I thought would make a great ranch site, particularly Johnson’s League Ranch and the Belding-Gibson Ranch. I blended the parts I wanted from each to create Hope Montoya’s ranch.

While on the driving tour, we learned the last Indian raid occurred in the area in 1872 when two brothers eight and ten, and their four-year-old girl cousin were kidnapped, their horses stolen, and many of their family members killed. The children were recovered by a trader who bartered everything he had for the three children. He took them to Fort Worth, where they were eventually reunited with their families. Prior to that, former slave Brit Johnson came home from one of his freighter trips to find one son dead and his wife and other two children gone. He immediately started searching for them, but it was almost a year before he located them and obtained their release. Those events sparked the idea for Zach Stone to rescue a boy who’d been captured (in book two of the series, HIGH STAKES BRIDE).

Hope Montoya knows someone is poisoning her, but who? She suspects her mother was also poisoned and knows her father was murdered. Who wants her family eliminated? She vows to fight! She realizes she won’t last eight months until she turns twenty-five and her uncle no longer controls her or her estate. Never will she be dominated by a man as she was by her father, as she has seen her mother and grandmothers dominated. If she marries, she gains control now, but only if she weds a man she can trust. Only one man meets her requirements. Can she trust him to protect her and capture the killer...but then to leave?

Micah Stone has been in love with Hope since the first time he saw her. But he was accused of her father’s murder and surely would have hung if not for his two brothers’ aid. Most in the community still believe him guilty. But the drought has him too worried about water for his dying cattle to care about his neighbors’ opinions. When Hope proposes a paper marriage in exchange for land on the Brazos River and much-needed cash, her offer rubs his pride raw. His name may be Stone, but he’s not made of it. He can’t refuse her for long, and so their adventure begins. He and Hope have to stay alive and discover the killer before they become victims in the deadly assaults.

BRAZOS BRIDE is available in e-book, print, and is free in Kindle Unlimited.

Set up – this takes place on the wedding night of their paper marriage. To make the marriage appear genuine to the townspeople, the couple stay at the hotel:

She looked at her hands. Perhaps she was unreasonable. Or maybe insane for sympathizing with a man who'd had to work harder because of her family.

"I know it is an odd situation. If—if you wear your shirt and britches, I guess it would be all right if you slept on top of the cover here." She patted the bed beside her.

He froze. Not a muscle moved, and he only stared at her. Had she misunderstood? Did he think her offer too forward?

She babbled, "That is, if you want to. You said I should trust you. Well, maybe you would be more comfortable where you are." Why didn't he say something? Would he prefer sleeping in a chair to sharing the bed?

From the street below, she heard raucous laughter and someone called to a man named Ben. Music from a piano, she supposed in the saloon, drifted in through the open windows. A gust of breeze moved the curtains and slid across her skin. In this room, though, there was no sound.

Slowly, he rose and extinguished the lamp as he moved across the room. She slid one of the pillows beside hers then scooted down. What had possessed her to offer him half her bed? Would he think she invited more?

Too late to take it back now, for the mattress dipped as he stretched out. Quaking inside at the thought of him so near, she turned her back to him. She heard his weary sigh, as if he relaxed for the first time in a long while.

"Good night," she offered, and hoped he understood the finality of the phrase.

"Yep. Good night, Mrs. Stone." The mattress shook as he turned his back to her. She felt the soles of his feet press against her ankles. He must be several inches too long for the bed and she guessed he had to bend his legs to fit. She didn't dare turn to see firsthand.

She lay perfectly still, afraid to take a deep breath. Soon his breathing changed and she knew he slept. Outside the open window the town quieted and the distant tinkling of the piano was the only sound. Light from the full moon illuminated the room and slanted across the bed. A soft breeze drifted across her, lulling her in its caress.

With a sigh, she fought to relax, but abdominal pain kept her awake no matter how her body cried for rest. Perhaps if she planned, she’d forget the pain and chills that racked her frame.

Plan, yes. She needed a plan for food preparation when she returned to her home. No, Micah said he had a plan. Oh, dear, once more he took charge when it was her life, her home.

Maybe Aunt Sofia and Uncle Jorge would have left by then and things would be fine. Already she felt more secure. She sensed her eyelids drifting closed and the sleep’s blessed relief approaching.

A gunshot ripped apart the night.

The blast startled her and she screamed as something thudded near her head, showering her hair and face with splinters. Panic immobilized her. What had happened?

Micah dragged her onto the floor as a bullet ripped into the mattress.