A FAMILY FOR MERRY by Caroline Clemmons

A FAMILY FOR POLLY by Jacquie Rogers 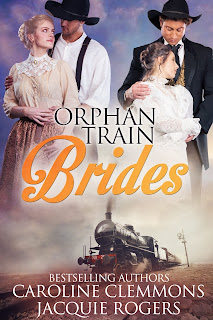 My friend, Jacquie Rogers, and I decided to each write a book about sisters. We’ve done this before with MAIL ORDER TANGLE and then the American Mail Order Brides books PATIENCE: Bride of Washington and MERCY: Bride of Idaho. Between laughing and giggling, we work well together. When we start talking plots and writing, her Mr. R and my Hero abandon us and go in another room. Someday, maybe, we’ll get around to writing the stories of the two boys who were adopted with Merry and Polly.

A FAMILY FOR MERRY by Caroline Clemmons

Rescuing three quirky orphans from a current orphan train was irresistible—if not quite legal. Former orphan train child now grown, Merry Murphy Bird has built a successful life operating the boarding house she and her adopted sister Polly purchased. Merry is determined to give her three children a better life than the nightmare she and Polly endured in Nebraska.

New boardinghouse resident and lawyer Blake Woolf has come to town to take over the practice of his late uncle. Weighed down by family responsibilities, Blake was the eldest of ten children. For now he wants nothing more to do with children—at least not until he has made enough to buy a home, marry, and start his own family.

A FAMILY FOR POLLY by Jacquie Rogers

Children’s Aid Society authorities don’t exactly know Polly Friday Bird and Merry Murphy Bird are single—and neither woman intends to volunteer the information. Polly hated the life she and her sister led after they were adopted by a surly Nebraska farm couple who really wanted free drudges. She would never treat the two children she’s adopted so harshly.

In fact, she believes the large boarding house she and Merry purchased is an ideal place to raise children, with a large yard, numerous rooms, and a good school nearby. Still, Polly needs a husband so she convinces Ford (Manford) Daily to marry her and be on his way. The problem is, he won’t go.

Excerpt from A FAMILY FOR MERRY

On Wednesday, Polly helped Merry organize their record keeping for the orphans. She and Polly were at the side of the altar where they could easily see the children and the prospective parents who’d come. A crisp tablecloth covered the table and draped almost to the floor in front. She and her sister sat on a bench provided for them.

Two matrons herded about two dozen children up the aisle and lined them across the altar as if they were going on the auction block. Tears burned the back of Merry’s eyelids when she surveyed the children and listened to the matrons give orders. Painful memories stabbed her heart.

She glanced at Polly. From the grim expression on Polly’s face, she must be experiencing similar memories. Although Polly had been at the orphanage longer than Merry, they hadn’t actually met until they were put on the train.

Years of hard work in harsh conditions had Polly and Merry’s hands broken out in bleeding sores before the couple that adopted them had died four years ago. She and Polly weren’t blood kin, but they had been adopted together from the orphan train when they were both eight. Almost ten years of slaving for Ruby and Joe Bird had been hard.

The Birds decreed that if anyone ran away, those left would suffer for it. Out of loyalty to one another, Polly, the two boys, and she endured their servitude. She and Polly had managed to survive and then each had inherited a fourth of the mean-spirited couple’s Nebraska estate.

The two boys adopted at the same time as them, Bartholomew and Newton, had each received a fourth of the inheritance. The young men went further west to homestead their own places adjoining one another. She and Polly hadn’t lived in the same place because the boys slept in the hay loft while the girls slept in the home’s attic space—both places freezing in winter and hot in summer.

A flood of recollections rushed at her and threatened to carry Merry into despair. She fought to reclaim her normally optimistic outlook. She had so much to be grateful for now. Focus on the good.

Reverend Zebediah Jones stood at the church door, as if to bar anyone he thought unfit. Merry had confidence the kindly preacher would do just that. Too bad no kindly minister had protected her and Polly—although the Birds put on a good act in front of others.

Some children wore hopeful expressions, some fearful, some so downtrodden their eyes were those of old people in young faces, and others looked only at their feet. Several particularly tugged at Merry’s heartstrings—the ragtags, the unadoptable. What would happen to them?

Couples from town came forward and chose one or two children. Of course Fiona and Brent Bushnell would be good to the boy they adopted. Gwen and Marshal Nate Canup also adopted a boy. Lavinia and Dennis Zimmerman chose a girl of four who Lavinia carried as they left.

Helga and Gustav Swenson had lost their sons to diphtheria last year and chose two brothers. Sophie and Dieter Mayer had lost two children in the same epidemic and selected a girl and two boys. Sophie cried with happiness as they ushered their new children away.

Merry recorded each couple’s names and the names and identification numbers of the children they selected. She was comfortable, believing these children would receive good treatment.

A scrawny little girl whose nametag said Abigail wore a pinafore too large that drooped off one shoulder and had a torn pocket. Her hair looked as if she wore a bird’s nest. The poor child limped badly, but something was off there.

Merry whispered to Polly, “Notice she changes legs for her limp.”

Abigail hovered around a toddler labeled Tamara. Occasionally, Abigail brushed against Tamara and the baby would cry.

Polly leaned toward Merry. “Did you see Abigail pinch the baby? I think she wants her to appear disagreeable so they can stay together.”

Merry gazed at the two girls. “Tamara is a pitiful sight. Her nose needs wiping. Do you suppose she’s old enough to blow her nose?”

Polly pretended to pick something up from the floor in front of the table. “The baby has red spots everywhere on her exposed skin.”

Merry stood and walked around the table. On closer inspection, the spots appeared to be from a paint crayon. Sorrow and mirth warred inside Merry.

What an ingenious child Abigail was. The poor girl must be frantic thinking she’d be parted from Tamara. Merry wondered if they were sisters.

A boy whose nametag said Calvin stood with feet braced, arms crossed, and a mulish expression locked on his face. His age would be around nine, a very desirable age for a boy. He glared as if he dared anyone to adopt him. No one did.

Merry got Abigail’s attention. “You must be tired from standing on your injured leg while taking care of baby Tamara. Why don’t you both sit beside me?”

Abigail pulled at a lock of her disheveled hair. “Both of us? You mean Tammie can stay with me?”

Merry smiled as reassuringly as she could. “Yes, that’s what I mean.”

Abigail picked up Tammie and deposited her at Merry’s feet then promptly sat beside her so that she and Tammie were obscured by the tablecloth’s skirt.

Merry motioned to the boy. “Calvin, I can see you don’t need anyone to look after you, but would you help me by standing beside Abigail to make sure no one bothers her or Tammie?”

He didn’t move for a full minute before he inhaled and released a deep breath. “S’pose I can.” Slowly, he ambled to stand behind Abigail and Tammie, as if daring anyone to touch the girls.

Merry wrote the names of the three children on the list and her name as the person adopting. To mask the fact there was no husband, she wrote her first name and then sort of scribbled her middle and last name in what she hoped passed for a husband’s name. Murphy Bird could be a man’s name, couldn’t it?

Beside Merry, Polly whispered, “What have you done?”