A Bride For Cody by Caroline Clemmons

A BRIDE FOR CODY 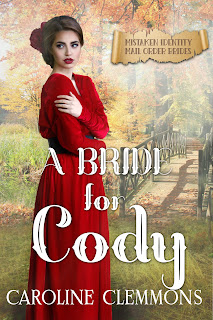 Today is the Book Birthday for A BRIDE FOR CODY!

Imagine the chagrin of a hero who eagerly awaits the arrival of his bride-to-be. Only, a different woman steps off the stage. Even more surprising, she brings a child and an uncle. Can you blame him for feeling cheated?

When Orlena Worth’s uncle witnesses a murder and rescues the victims’ child, Orlena must get her uncle and the child to safety. Once again, Orlena must fend for her family but where can she go with minimal funds and little time to prepare? Her friend has changed her mind about becoming a mail order bride. Orlena seizes her chance and takes over the friend’s information. As she whisks her charges to Texas, she believes the killers can’t trace her and her uncle.

Rancher Cody Hudson has precise plans for the next decade of his life: get mail order bride now, start family in two years, expand ranch in five years. He’s not inflexible, he simply likes to map out his goals. So far, he’s done well using this strategy. But when the wrong bride arrives with an absent-minded uncle and an orphaned toddler, he’s flabbergasted. How can he cope? His life’s plans are overturned. Should he send her back?

Will Cody find his wife intolerable? What will be required to make him realize that the wrong bride might be the right one for him?

A BRIDE FOR CODY is available from Amazon. In addition, it’s enrolled in Kindle Unlimited.

(Hugo is almost four and calls Orlena by the abbreviated Orla)

Hugo held out a drawing with strange markings. “See, Orla. I drew a horse.”

She accepted the scratches he’d made. “I see, Hugo. I had no idea you were an artist. Give me your crayon so you can see what Cody has for you.”

Hugo turned to Cody, who’d squatted eye level with him. “I heard about a boy who loves horses. Do you know who that could be?”

Hugo put his hand on his chest. “I do. I love horses.”

Cody untied the string and pulled it from the package before handing it to Hugo. “See if this is something you’d like.”

Hugo quickly peeled away the brown paper to reveal the wooden horse on wheels. His eyes were round as he held the toy with both hands.

“A horse.” He hugged Cody, almost toppling him.

Wearing an odd expression, Cody sat on the floor watching as Hugo dropped beside him and rolled the horse along the braided rug.

Hugo glanced over his shoulder. “Look, Orla, Cody gibbed me a horse.”

“It’s grand. Did you remember the special words?” She suspected the hug meant more than mere words.

Hugo glanced at Cody. “Thank you.” He returned to his play.

Orlena watched him bumping over the rug’s coiled braid. “Your horse will roll more easily if you move off the rug.”

Cody watched the boy also. “Maybe the horse is traveling on hills.”

She sent him what she hoped was a scornful stare. “Thanks for your support.”

He ignored the glare and smiled. “Always happy to be of help.”

“You won’t be so glib when the rug is damaged.”

He lay back on the rug and crossed his arms beneath his head. “You think a child’s horse will ruin it? Ah, well, no matter. My wife will braid another, I’m sure.”

She leaned forward. “Oh, are you? And what makes you think your wife knows how to do such things?”

His bright blue eyes looked at her. Though he grinned, his eyes gave the impression he was serious. “I get the feeling she can do anything she sets her mind to.”

While you’re here, why not follow me on Book Bub? The Book Bub Author URL is https://www.bookbub.com/authors/caroline-clemmons