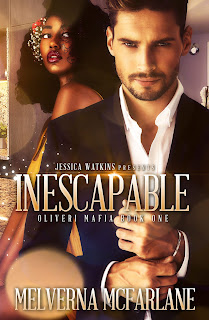 Jessie has sworn off relationships until she can exorcise her secret celebrity crush from her thoughts. More importantly, her fantasies. Crushing on someone rumored to be in the mafia was a red hot no for her. When she comes face-to-face with the man himself, he is more dangerous than she initially thought... and not just to her safety.

Gio Oliveri is the wealthy heir to the dubious Oliveri business empire. Ruthless in business and his personal life, Gio never lets an insult go unaddressed. So when a woman embarrasses him, in his own club no less, he sets out to teach her a lesson, only to set his sights on her friend. After a disastrous first impression, he buys himself three months to woo Jessie, who challenges him at every turn. He has to find a way to keep Jessie before his family responsibilities tear them apart forever.

Enthralled by his relentless pursuit, Jessie must decide if her growing feelings are enough to overcome her misgivings about his life as a mobster.

When we entered our bedroom, we were both in a state. Giorgio cursed, closing his eyes for a moment until his breathing calmed. He was taming his response to me. Could it be we were on equal footing when it came to our passion for each other?

With new found confidence, Giorgio approached. He placed my hands on his shirt. “Undress me first,” he bid, voice hoarse, mouth a tease away from glancing my forehead.

Soft lips journeyed to my right ear, and I leaned into him, needing the pressure. “Take your time,” he murmured, his sensual intent touring my erogenous zones from the inner whorls of my ear detouring at my peaked breasts before reaching its final destination—my tingling nether regions.

“Make me burn.” His final directive inflamed me.

Air swooshed into my lungs, a reminder I had to breathe, even after Giorgio stunned my respiratory system. A futile effort to control my trembling hands and legs followed. The wild, smoky smell of his pheromones swamped me in a sea of need.

He was toying with me, directing our play to get me to succumb before he did. Well, I had promised him a performance, and I’d be darned if I phoned it in. Arousal was double edged and seduction was a two-player game.

I ignored Giorgio’s shirt buttons, instead sliding my hands on a slow glide down his torso, a phantom stroke in the wake of my blunted fingertips.

I walked behind him, my breasts pressed against his back. My fingers engaged in a game of indecision; fondling a shirt button before abandoning it; toying with his pants zipper then moving on to his belt buckle; button, zipper and buckle still in place.

I smiled when an impatient growl slipped through his self-control. He made a grab at my hands. I evaded by plunging them down his waistband. He froze mid-grab, his focus on my proximity to his attention seeking appendage.

I withdrew his shirttail. Taking pity on him, his labored breathing a clear sign I was, in fact, making him burn, I undid his shirt. My fingertips slowly stroked, in aimless patterns, before finally divesting him of it.

I circled back around to his front, his torso struck the perfect balance of lean and muscle. With a sly grin, I grasped his belt buckle and lowered myself to my knees.

His breath played a staccato beat, his pupils dilated and his hands fisted until his knuckles turned white. The air filled with desperation tinged anticipation. Giorgio’s eyes shouted at me, asking whether I would use my mouth and undo him or leave him ungratified.

Melverna McFarlane loves stories with Happily Ever Afters. After years of characters taunting her imagination with their potential, she decided it was time to write her own scorching hot romances. She moved to America from Jamaica at a young age, and has lived up and down the east coast most of her life. The bitterly cold winter of 2013 was the last straw, driving her back to island life—this time to Hawaii. When not writing, she is reading romance, YA, and Fantasy, country hopping, or vicariously obsessing over other people’s cats (she awaits the day her landlords succumb to the truth: feline domination should be everyone’s goal in life). Connect with her on her website www.melvernamcfarlane.com, Facebook, Twitter, or Instagram.