LONG WAY HOME, a sweet historical romance novella set near the end of the Civil War, is on sale for 99¢ today through Wednesday, September 29th.

During the Civil War, no doubt soldiers longed for home the way it existed before the War. Many men lost their home and family members. In the Civil War, more men died than in any other war in which the United States has been involved. That’s a staggering statistic. Think of all the women who lost loved ones, who became spinsters because there simply were not enough men left of marrying age, and the damaged men who did return. Post Traumatic Stress Syndrome was called battle fatigue, and thought to be temporary. No one knew how to treat severe cases.

Prisons on both sides were horrendous, as Parmelia Bailey’s brother found. Many who survived lost so much weight they were skeletal. Often they were without coats in freezing weather, some without even shoes. We hate foreign countries that do to our soldiers what our own countrymen did in the Civil War.

Soldiers from both sides chose several options after the War’s end. Some returned home to reclaim as much as they could. Some traveled West to seek a better life. Others became outlaws like the Quantrell or Murrell’s Raiders or similar groups, using their army training to rampage and wreak destruction. 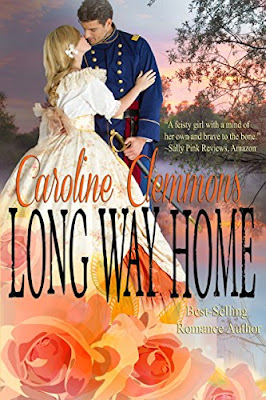 Parmelia Bailey has promised to keep her family safe until the men in her family return from War. That includes bringing her brother’s fiancée, sisters, and mother to stay at the home of Parmelia’s grandmother in town. Maybe she shouldn’t have stolen back her horses from the Yankees, but she could think of no other way to rescue the Hardeman women.

Darrick McDonald waited four years to return to Witherspoon, Georgia and Parmelia. Who would have dreamed war would bring him back. He had to protect Parmelia from a renegade who’d vowed to make her sorry she’d turned down his proposal. He prayed he wasn’t too late.

At last, she turned into her grandparents’ drive and pulled around to the back. With a huge sigh, she stopped at the carriage house. Surely a week had passed since she caught her horses last night. All she wanted now was to crawl in bed and sleep for days, pretend the war never happened. She couldn’t relax yet, not until the horses were back with those Yankee scoundrels.”

“Sarah, let’s see your mother and sisters inside. After that, Rob and I will deal with the chickens and cow.” Parmelia’s hands shook as she climbed out of the buggy. Fatigue, relief, and fear turned her limbs to jam.

She walked Sarah and her family to the back door where Grammy and Mama took over.

Parmelia returned to the carriage house. “Rob, help me unhitch the horses and put their bridles on so I can take them back.”

“Why don’t I do that.” Darrick McDonald stepped from the shadows. He appeared calm, until she looked at his face.

Parmelia was surprised sparks didn’t shoot from his dark eyes and ignite the entire carriage house. She clutched her throat, hoping a way out of this predicament would come to her. How had he known to come here, to wait for her?

“Darrick, you—you gave me a fright.”

“Did I? Perhaps you have a guilty conscience.” He freed one of the horses.

“When did you come back?” She fought for an idea, but none came to her.

“Late yesterday.” He walked back and forth beside Lady. “Funny thing, you having two horses after the Army confiscated all the livestock in town. Another coincidence, two Army horses went missing overnight.”

He stopped and gave her a piercing look.

She gave up with a sigh. “I can explain.”

“I’m listening.” His eyes were still dark with anger.

“My brother’s fiancée. You remember Sarah Hardeman? I had to bring her and her family to town. I—I had no way to do that without a team.”

Rob added, “These are our horses anyway. You low down, yellow-bellied Yankees stole them from us.”

Oh, Lord. Leave it to her brother to make things worse.

“Hush, Rob. Give me the bridles. Put the cow in the barn then come help me with these chickens.”

He pouted and handed over the tack. “Oh, all right. I never get to hear anything good.” Rob untied the cow and stomped toward the barn.

“So, you’re a Yankee officer now.”

Her temper conquered her good sense, and she stepped toward him. “You’ve got your nerve, coming here wearing that uniform, you...you traitor.”

He stepped forward until they were almost touching. “Call me what you will, but you’re the one who stole two horses in a time of war.”

She refused to retreat. “How can you accuse me of stealing, when you Yankees have taken over our town?”

“Because you did steal them, and you weren’t even clever about it. I followed their tracks to your grandparents’ home. You do realize that with a less sympathetic Colonel, they could lose their home?”

Dear heaven, she hadn’t considered her grandparents if she were caught.

“No!” She took a step backward. “I was going to return them. Rob’s right, they are ours. They know me, so they were eager to come to me.”

He pulled a small, withered apple from his pocket.

Rats, she must have dropped it, one of the few from their store of fruit in the cellar.

Darrick held the apple in front of her nose. “Looks to me as if you coaxed them away.”

She sighed, “Maybe I did, but it was only to use them for a little while. Sarah and her family were in great peril.”

He tossed the apple from one hand to the other, but stared at her face. “Are you crazy? You could have been killed.”

She grabbed the apple from him. “Sarah, her mother, and sisters could have been murdered and their home burned. We barely got away in time as it is.”

“If you had bothered to consult the Colonel, he would have sent soldiers for them. As it turns out, I would have taken my men and gone.”

“Are you crazy? You could have been killed.”

Shocked at the concern in her voice and in her heart, she continued, “Um, I mean, they might not have recognized you and could have shot you. Or, that man that tried to take my horse could have killed you.”

Oh, no, she hadn’t meant to tell that last part.

He grew angrier and grabbed her arms. “What do you mean?

She tried to twist away. “Nothing.”

“Parmelia Bailey, who tried to take your horse?” He turned her to face him.

Refusing to meet his gaze, she stammered, “There, um, there was a man in the woods, a ways north of the Mitchell’s house. He…um, he jumped at me and tried to take Beauty, but Rob and I got away.”

“You are the stubbornest, orneriest woman I’ve ever known. Don’t you realize what could have happened to you?”

“It crossed my mind,” she snapped and raised her face.

“Yours? You moved away and left me, remember? And now you’re a Yankee officer.” Lord, she shouldn’t have reminded him she’d loved him. Worse, she still loved him.

She willed tears not to fall. Keep your anger up, don’t let him know how he hurt you.

“You know why I left Witherspoon. You know I had no choice.”

“There’s always a choice.” And she would have chosen to go with him, if only he’d asked, even if she had been only sixteen.

She shrugged away from his grasp. “Steal? Soldiers stole them from us. Do you understand the term ‘borrow’? That’s what I did.”

“In times of war, the government has the power to confiscate items from civilians. Do you understand that?”

“Call it what you wish, it’s still stealing when you take what’s not yours and keep it.”

“Maybe we’re only borrowing your horses.”

She thought his mouth twitched to hide a smile. His humor only irked her more.

“Like you Yankees borrowed from the stores in town so we can’t even buy supplies—that is, if we had money. Which we don’t.”

He smiled. “I heard you had plenty of those Confederate dollars.”

“Oh, you...you Yankees make me so mad. Take my horses and leave.” She turned and stomped toward the house.

He called, “Aren’t you going to invite me in to say hello to the family? Maybe you could bake me an apple pie.”

She slammed the kitchen door and leaned against it. His laughter floated around her.

From the front of the house, she heard Mrs. Hardeman complaining and Mamma and Grammy’s soft, soothing answers. She wondered how much of Mrs. Hardeman’s grousing they’d have to endure.

Parmelia pushed away from the door, and then remembered those dratted chickens. Peeking through the curtains, she saw Darrick leading the horses away. His long, lean body looked good, his walk a confident swagger. Dark brown hair caught the sunlight. Lordy, he was better looking than he had been four years ago when he lived in Witherspoon.

When he’d touched her just now, she’d sizzled. She’d wanted to throw herself in his arms and have him reassure her, kiss her, love her. How could he create these sensations inside her when he’d abandoned her four years ago? When now he sided with their enemies?

She jumped when Sarah came up to her.

“Parmelia, is something wrong?”

“I—I just remembered the chickens is all. I’ll get Rob to help me get them down and into the chicken coop.”

“Nonsense. My sisters and I will do it. You look all worn out. You must have ridden most of the night.”

She shrugged. “I’m all right. We started for your place close to midnight.”

Sarah’s dark eyes sparkled. “Did you really take those horses from the Yankees?”

“Yes, but they’re on their way back to those thieves now. Darrick McDonald was waiting for them in Grammy’s barn.”

She sighed, hating to admit the truth. “More. And taller. He sure fills out his uniform, too, but it’s blue.”

Before Parmelia had to answer, Rob slammed inside the kitchen. “That old cow’s still upset. Am I supposed to milk her or what?”

“I’ll get the pail for you.” Parmelia retrieved it from the screened in porch. “The stool’s still in the barn.” She clasped her hands. “Fresh milk. Oh, that will be wonderful. We’ve been without it for a month.”

“Maybe she can eat the lawn tomorrow. I’ll try to barter some hay.” But who had any supplies except the Yankees? Sighing, she went back into the kitchen. She simply could not deal with another crisis today.

If this tempted you to purchase LONG WAY HOME, it’s available from Amazon at

If you read this novella and enjoy it, please leave a review on Amazon and/or Goodreads. I’ll appreciate your effort.