SUNSET AT ROSALIE -- SOUTHERN LIFE OF THE 1900S

SUNSET AT ROSALIE tells the story of a young girl, Carlin McNair, and her family on a failing cotton plantation in Mississippi during the early 1900s. The coming of the boll weevil and the sharp decline of cotton prices cause drastic changes in the life of the plantation and in the lives of the family members. Carlin adores her Uncle Will. But like the plantation, Will is doomed and his story is an important part of Carlin’s growing up. McLaughlin describes this part of Southern culture in vivid detail, which brings Carlin’s young life close and makes that almost extinct plantation life come alive once again. 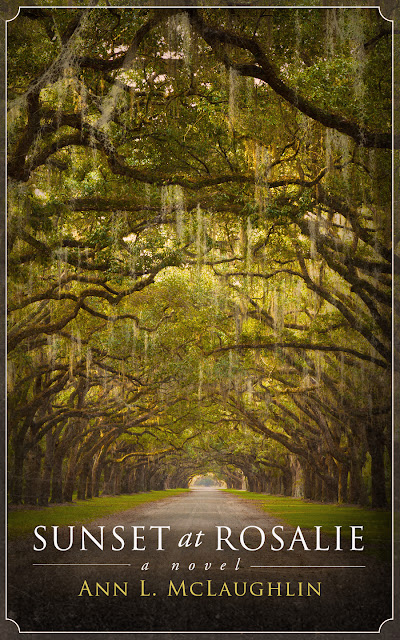 When Carlin opened her eyes, the early morning light was slanting through the blind at her window and someone was talking on the front gallery down below. Carlin started to swing her legs over the edge of her bed, but stopped and sat counting as the grandfather clock downstairs struck five, which meant it was really six.

She pushed back the mosquito netting that hung over her canopied bed and ran to the window. The voices were low. She heard a man’s cough and then a familiar voice.

It was Uncle Will, Carlin realized. He was the only man beside Papa who called Mama Belle. He had come at last. “Uncle Will,” she started to shout.

“You mustn’t act too quickly,” Mama was saying. “This could be a terrible thing to do.”

Carlin pulled the blind up quietly and leaned across the window sill. “I know that, Belle. I know the pain and humiliation I’ll cause.” Carlin leaned out further. What were they talking about? What pain?

Ann L. McLaughlin is the author of eight highly acclaimed novels including Lightning in July and Amy and George. She teaches at the Writer's Center in Bethesda, Maryland and lives in Chevy Chase.

Thanks for sharing with readers today.