FIRST IN SUE BARR'S NEW SERIES, MAN OF HER DREAMS

Thank you so much, Caroline for welcoming me to your blog. I’m pretty excited about the release of the first book in my Welcome to Ravenwood series ~ MAN OF HER DREAMS.

About MAN OF HER DREAMS:

Making it in a man’s world as a home renovation expert is tough, but Lindsay Swanson’s up for the job, leaving no time for family and friends, let alone any kind of social life.

Jared Kane moved to Ravenwood for some much needed peace and quiet to finish his next book, which is hard to do when he’s hired his sexy neighbor to renovate his kitchen.

Then Lindsay overhears Jared talking about her notebook. A notebook wherein she and her BFF – after one too many bad dates and one too many glasses wine – concocted a checklist of the perfect guy. Is Jared the real deal, or has he been molding himself into the man of her dreams to get past her defenses? 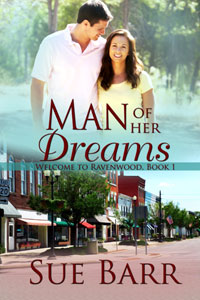 A Fun Excerpt from MAN OF HER DREAMS:

(Author’s Note) – Some scenes were so much fun to write, and I loved the friendship between Lindsay and Tina (also her sister-in-law). I hope you enjoy

The whine of a miter saw became louder.

What was he doing now?

Lindsay minimized the application on her computer and swiveled to look out the second story window. Her home office overlooked the new neighbor’s driveway. A neighbor who’d become extremely distracting.

She couldn’t make out his features, with a baseball cap covering his face from her elevated view, but she sure could see his body. At that moment Tina’s ringtone sang out.

Lindsay dropped the curtain as if burned.

“No.” She faced her computer, which had gone into screen saver mode. “I’m at my computer.” She jiggled her mouse and a CAD program popped up, displaying a current renovation.

“You are such a liar. I’ll bet you haven’t touched your mouse until right now.”

Lindsay let go of the mouse. How did Tina always know what she was doing? It was like she had a spy camera in her office.

“I shouldn’t have told you what he was doing.”

“Well, you did and now I want to know more.”

“You’re a married woman. You shouldn’t think this way.”

Tina laughed out loud. “I may be married, but I’m not dead. Besides, I can look at the dessert tray as long as I don’t place an order.” Lindsay imagined Tina’s eyebrows waggling while she spoke.

“Come on, woman. Feed my avarice.”

“I’m doing crosswords at the doctor’s office while I wait for my appointment. Stop stalling. Give me details. Have you figured out what he’s up to?”

Lindsay stood, and partially concealed by her curtains she watched, as she had for most of the morning. What she saw pushed her pulse into overdrive.

All sweaty in a pair of low-rise Levi’s and scruffy work boots, Hot Stuff grabbed a water bottle and sucked back huge gulps. As his thirst was quenched, her mouth became paradoxically drier. His wide shoulders and hard chest looked as though they’d been sculpted by Michelangelo himself. Twin ropes of muscles carved around six pack abs, causing her heart to trip along a little faster.

“Well?” Tina whispered into the phone.

“He’s finished clearing the backyard.” Lindsay whispered back. “Now he’s cutting lumber, but they’re too short for even a deck.”

“I don’t know if you’re ready for this. He’s shirtless.”

“Noooo…. So unfair. I don’t have any hot neighbors, just acres and acres of corn fields.”

Sue resides in beautiful Southwestern Ontario, Canada with her retired air force husband, close to their sons and families. The other members of the Barr clan are furry, and demanding. Very demanding. The kids were easier....

When not busy writing, Sue loves to spend time with family and friends. She sings along with the radio in the car hoping no one sees, has been known to laugh until it hurts, sneaks a few non-healthy things.... ugh.... a LOT of non-healthy things into her diet, and thanks God daily for allowing her to have this wonderful, wonderful life.

For more information about Sue’s books or to sign up for her newsletter and get the skinny on new releases, visit her website: www.suebarrauthor.com - NO Spam policy. Pinkie swear.

Thanks for sharing, Sue. MAN OF HER DREAMS sound intriguing.