Dashing through the snow….

Thursday was the release of MURDOCH’S BRIDE, which is set in Montana in February. Snow plays a large part in the book. In fact, a blizzard isolates people at Murdoch Ranch.

How do you feel about snow? Because I live in an area that seldom receives crippling winter conditions, I like snow. Of course, full-time authors don’t have to commute to work. Here I sit in my office I call my pink cave, which opens off the master bedroom. I don’t have to stress over my work wardrobe and can wear my pajamas to work if I wish. Like now, but I that respiratory crud that's making the rounds.

However, when writing MURDOCH’S BRIDE, I stayed cold. All those words about the weather and visualizing the conditions on Murdoch Ranch kept me off balance. I’d write and be engulfed by cold. When I came out of my pink cave, I was surprised there was no snow and that the house was nice and warm. Authors are odd ducks who become immersed in their fictional worlds.

Here’s the blurb for MURDOCH’S BRIDE.

Stranded in the snow…

Charity Kelso is accompanying her fussy Aunt Edith from New York to Oregon when their train is wrecked and the passenger cars burn. Sweetwater Springs doesn’t have a hotel, so passengers are parceled out to townsfolk’s homes. No one wants anything to do with complaining Aunt Edith. That also leaves Charity and their newly widowed friend Amelia nowhere to stay until the tracks are repaired. A new blizzard is headed their way, so what are they to do?

Logan Murdoch and his brother came to Sweetwater Springs to restock before the next storm arrives. Against his better judgment, Logan lets the sheriff convince him to take three so-called innocent women to Murdoch Ranch. Other than their housekeeper-cook, a woman hasn’t set foot in the Murdoch home in the twenty years since his mother abandoned them. He doesn’t expect his father to welcome these unwanted visitors.

Both Charity and Logan are surprised at the events that unfold. How could this have happened? 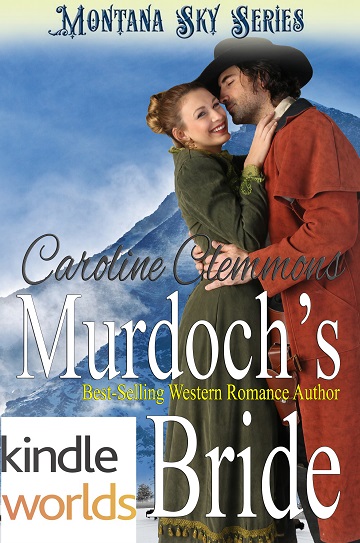 Do you like the cover? The reason I chose those models is because the woman looks so happy. Of course, that’s how Charity appears at the end of the book.

Here’s an excerpt of the first kiss:

The Murdoch men came inside as Charity came down the stairs from fetching a clean handkerchief for her aunt.
Logan said, “Ornery old cow.”
Charity gave Edwina her hanky and stomped toward him. “Mr. Logan, may I speak to you privately?”
Surprise showed on his face. “Uh, sure. Guess we can go into the office.”
He led the way to a room she hadn’t seen, obviously where the ranch records were kept. “Will this do, Miss Kelso?”
She closed the door behind them. “Logan Murdoch, you have your nerve calling my aunt names. For your information, she’s had a horrible life and no one, not her selfish parents, not her cheating husband, not even her son ever loved her. And, that includes my father, who’s her younger brother.”
He stood looking poleaxed. “I never said—”
She stabbed at his chest with her forefinger. “I heard what you said. You called her an ornery old cow. She may be difficult sometimes, but if you knew everything about her you’d understand and be patient and forgiving. You can make fun of me all you want, emphasizing that I’m Miss and not Mrs., but you treat her with the respect someone her age deserves.”
He moved her hand away from his chest and leaned into her face. “You might try practicing some of the charity you’re named for and at least give me a chance to defend myself. I was talking about our cow. In case you haven’t noticed, I have milk all over my legs and boots because she knocked against the pail.”
Heat rushed to Charity’s cheeks. She stepped back. “Oh.”
He stood with his hands on his hips. “That’s a good comeback, Miss Kelso.”
She sensed a blush’s heat spreading across her face and neck. “Once again, I must ask your pardon.”
“When you’re angry, sparks fly from those big blue eyes. Reckon I’m lucky I wasn’t set on fire.” He closed the short distance between them and he brushed a hand gently along her cheek.
She knew he was going to kiss her but stood frozen in place. He tilted her head up to meet his and pressed his lips on hers. She thought he would withdraw then, but his arms were around her, pulling her closer. As if they had minds of their own, her arms encircled him.
When they broke apart, he stared at her with a horrified expression. “Damn.”
With the realization she’d cooperated in the kiss and even enjoyed it, horror shot through her. “My stars.”
She took a deep breath and left the office.

Here’s the buy link for MURDOCH’S BRIDE: http://a.co/0VmUutI
MURDOCH’S BRIDE is only $1.99. This is one of Debra Holland’s Montana Sky Series Kindle World releases. If you're a fan of Debra's books (which I am), you'll see some of her characters appear in this book.

To celebrate, I'll give away an e-book copy of MURDOCH'S BRIDE to one person who comments on this post.

Posted by Caroline Clemmons at 7:24 AM

Congratulations on your recent release. I always look forward to your new books.

Sounds like a good read, but then, I love all your books.

I love westerns so I'd really love to read this one. Thanks for the giveaway!