I love reading and writing mail-order bride books. Why so many mail-order brides? Here’s an example: In my husband’s family, one spinster lived with her sister and brother-in-law and functioned as little more than a servant in their home. There’s a similar story in my father’s family. This situation was not uncommon in the nineteenth century. Yet, most women wanted their own home and children even if they didn’t love their husband.

According to estimates I’ve read, over 750,000 died in the Civil War. There weren’t enough single men left to supply grooms for marriageable women in the East. Many single men went West to seek land and start a new life but there weren’t enough single women in the West. The solution? Mail-order matches. They were the EHarmony and Match.com of the 1800s. Some ended well and some didn’t. For my romance books, though, they all end happily!

My Loving A Rancher Series of mail-order bride books were formerly part of Debra Holland’s Montana Sky Series of Kindle World. When Amazon closed the KindleWorlds, I didn’t want to leave that world. Debra graciously reverted the rights to me. So, locales are now Cottonwood Springs and Randall Crossing, both still in Montana. My characters remain the same but the names of Debra’s characters have been changed. The books are available in e-book and print (not so gentle hint!). Each is also be available in Kindle Unlimited. Each of the books is sweet, clean, and family oriented.

The first of this series is AMANDA’S RANCHER, http://a.co/jddh1g7. Please pardon the lack of modesty but this is one of my favorite of the books I’ve written in the past few years. This was an Amazon experiment and is slightly longer than the usual Kindle World book. It involves stolen identity, mystery, murder, adventure, and romance.

Growing up in a brothel, Mara O'Sullivan battled public disdain and contempt, but always remained kind-hearted, virtuous, and gracious. After testifying against vicious bank robbers, her life is threatened and Mara must find sanctuary far from everything she knows.

One train ride changes her life as she fatefully meets a half-sister and a niece she never knew existed. But when circumstances end her sister's life, Mara makes a promise that she'll raise her niece as her own and take her sister Amanda's place as Preston Kincaid's mail-order-bride. As Mara (now calling herself Amanda) and Preston grow closer, their marriage no longer seems like a ruse, but a relationship of love, passion, and desire.

Mara's past comes back to haunt her and she finds herself in danger—will her new husband forgive Mara's deceit and protect her as his own? 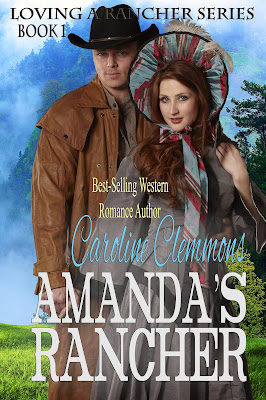 They reached the church and Preston jumped down from the wagon and came around to help her alight. With a smile, he lifted Iris high over his head before he set her on the ground. Her giggle brought tears to Amanda’s eyes.

That was the first time she’d ever heard her daughter make the girlish sound. Iris had smiled, spoken, but never laughed until she met Preston Kincaid. For that alone, Amanda would be the best wife she knew how to be.

Inside the church, Mrs. Moore handed Amanda a bouquet of daisies secured with a white ribbon. The interior was plain with wooden benches and an altar raised one step above the rest of the floor. Although there were several windows, none had stained-glass as did the churches she’d seen in Georgia.

The minister was waiting at the front of the church and wore a black frock coat and matching string tie. His brown hair and beard were thickly streaked with gray. He stood at a simple lectern with what looked like a Bible in one hand while he conversed with another man.

Amanda was surprised only one other person besides Reverend and Mrs. Norton were in the sanctuary. She’d supposed Preston had many friends in the area and thought at least his ranch hands would attend. The second man turned and proved to be an older version of her groom who came forward to greet her.

Preston cupped her elbow. “Amanda and Iris, this is my father. Most folks call him Tom, but I call him Papa.”

Amanda smiled at the handsome man who must be around fifty. He was tall, but maybe an inch shorter than his son. Silver sprinkled the same dark hair. “May I call you Papa, too?”

He beamed his pleasure and his blue eyes crinkled at the corners. “I’d be honored. And in the absence of your father, may I walk you down the aisle?”

“Would you? I’d be ever so grateful.” She laid her hand on his arm. Nerves had set in and she needed his support or her knees might give way.

Preston said, “Iris, why don’t you stand with me while my papa walks Mama to meet us?”

Iris shook her head. “Mommy, not my old mama?”

Panic sent bile into her throat that threatened to choke her. Don’t throw up on your wedding dress. “Perhaps you remember my mother recently died.”

Sympathy shone from his blue eyes. “Of course.” He took Iris’ hand in his and strode to the front.

Mrs. Moore began playing the piano. She nodded toward Amanda. Papa Kincaid gently led her up the aisle.

Walking toward her husband, Amanda was conscious of Preston’s stare, as if he could see into her mind and knew her for an impostor. Although he held Iris’ hand, the intensity of his blue gaze unnerved her. She wondered if he was disappointed or if he were as numb as she.

Thankful for the presence of her future father-in-law beside her, she tightened her hold on Mr. Kincaid’s arm.

In response, he patted her hand her where it laid on his sleeve. Without looking at her, he whispered. “Steady as you go. We’re almost there.”

Iris gave a tiny wave and Amanda couldn’t resist smiling at the child. The little girl truly was a blessing. Focusing on Iris gave Amanda a target she could face.

When they reached the front, Mrs. Moore ceased playing. Preston took the bouquet from Amanda’s hands. “Iris, would you hold this for Mommy so she and I can be married?”

Iris looked at him adoringly and reached to receive the flowers. Reverend Moore opened his Bible and began the ceremony. Preston took Amanda’s hands in his. She was conscious of his calluses, but also of the size and strength of his palms dwarfing hers.

When the minister indicated, Preston slipped a ring onto her finger. This new one belongs to me, even if my groom doesn’t know my true name.

After the ceremony, Preston brushed his lips gently against hers.

Iris clapped a hand across her mouth in surprise then said, “Mommy? That man kissed you.”

Preston knelt eye-to-eye with her. “I’m your new Daddy, remember? Mommy and I were just married and now I can kiss her whenever she says it’s okay. Do you think you can call me Daddy?”

Iris nodded. “Are you gonna kiss me, too?”

He smiled broadly. “I certainly am.” He leaned forward and gave her a loud smack on the cheek.

The child giggled. Twice in one day this kind man had made Iris happy. Amanda owed Preston all her wifely devotion.

If you haven’t read this book, I hope you’ll give AMANDA'S RANCHER a read.

Posted by Caroline Clemmons at 10:34 AM