BACK TO THE BEGINNING

This post is part of a virtual book tour organized by Goddess Fish Promotions. Christina Ann Gist will be awarding a $10 Amazon or B/N GC to a randomly drawn winner via Rafflecopter during the tour. Click on the tour banner to see the other stops on the tour. 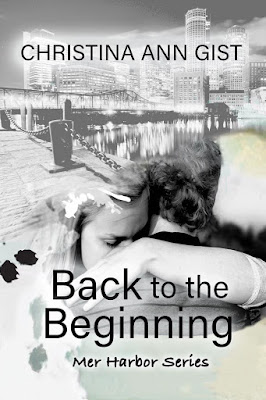 Mer Harbor is a small, coastal town in Southern California. Everyone knows everyone, and nothing is a secret among Mer Harbor residents. Some hope to escape someday, while others find the charm of the town enticing, and never leave.

Everley Romero and Heath Mitchell had always planned to take on the world together. To leave Mer Harbor and pursue their dreams. It all seems to crumble when a tragic loss sends them in different directions.

Almost ten years later, Everley finds herself on the receiving end of a bitter divorce, leaving her no choice but to return to the home - and past - she'd hoped to leave behind for good.

Heath is building a good life for himself in Mer Harbor. When he crosses paths with Everley, he learns that they'll both have to face a past full of heartbreak and loss that they've both tried to bury.

“Why the hell did you even bother?” Benny was shouting again, this being what seemed like their millionth fight this week. “It's obvious you don't love me, so why didn't you just stay in Mer Harbor?”

“I do love you!” she shouted back, “I don't know how else I'm supposed to prove it to you!”

It was always the same argument, and it happened every year around her daughter's birthday. Why couldn't he see her sadness was about the child she’d lost and not his high school rival?

Running away had been a mistake, but Mer Harbor had become so suffocating that she saw no other option. Besides, she usually had fun with Benny. How could she have predicted he'd forever be jealous of a relationship that had ended years ago?

“Six years, Everley,” he started up again. “It's been six damn years and he hasn't come looking. He doesn't care about you anymore.”

She knew he wasn't looking, and she knew exactly where he was. Heath had returned to Mer Harbor shortly after she left, and he wouldn't look for her, because he hated her.

Mistake or not, she was determined to make what she had with Benny work. She owed him that much. “What do you want from me?”

“Be with me,” his expression softened, and he stopped shouting, “and I mean really be with me. Stop putting it off and marry me.”

Telling stories before she could even write, Christina Ann Gist grew up knowing she wanted to be an author. She “published” her first stories with construction paper and handwritten pages for her family and friends. Now, with the magic of technology, she’s able to share her characters and stories with the world.

When she’s not writing, you can find her dabbling in her other favorite hobbies such as photography, stargazing, and of course: looking for her next adventure.

Christina Ann Gist is a new author to me, but I look forward to reading this. I always love meeting new authors. Thanks to this blog for the introduction.

Thank you for hosting! This story has been a years long project for me, and it’s amazing to see it out there in the world! I am at work today, but will be dropping in to chat and answer any questions you may have!

Thank you! I hope you enjoy!

I enjoyed the excerpt thank you.