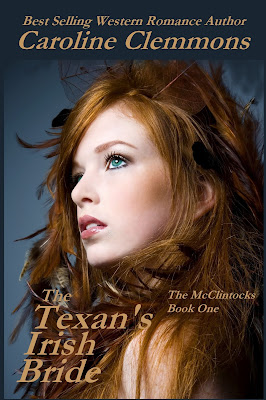 Cenora Rose O’Neill knows her father somehow arranged the trap for Dallas, but she agrees to wed the handsome stranger. She’d do anything to protect her family, and she wants to save herself from the Irish Traveler bully, Tom Williams. A fine settled man like Dallas will rid himself of her soon enough, but at least she and her family will be safely away from Tom.

Texas rancher Dallas McClintock has no plans to wed for several years. Right now, he’s trying to establish himself as a successful horse breeder. Severely wounded rescuing Cenora from kidnappers, Dallas is taken to her family’s wagon to be tended.  He is trapped into marrying Cenora, but he is not a man who goes back on his word. His wife has a silly superstition for everything, but passion-filled nights with her make up for everything—even when her wild, eccentric family drives him crazy.

Warning: Lately all my books have been sweet. This one has sex, but it’s between a husband and wife.

Her rose scent filled him, and he thought he would never tire of it. She fumbled with his shirt buttons then pushed it from his shoulders.

“Yours is a very broad chest.”

Her fingers skimmed across him, and his need for her magnified. When she traced the whorls of his nipple, he thought his knees might give way. He stilled her hand.

“There’s something I want from you, have wanted since we met.”

Fear sprang into her widened emerald eyes and she paled. Dang, he cursed himself for frightening her and her for not trusting him.

Her voice trembled. “Wh—What would you be asking?”

“Dance for me.” He knew it sounded crazy, but he’d imagined this for days.

She looked askance. “Here? But ‘tis your bedroom, and not a note ‘o music playing.”

“This is our bedroom, and you can sing or hear the music in your head to keep time.”

“Please? Not for coins or where others can see, but only for me.”

A slow smile spread across her face, and she cocked her head to one side. “Aye, I see now. If ‘tis for your pleasure, then ‘twill be mine.”

After she took off her shoes and stockings, she spun away. But not in the regimented dance he’d seen when other women accompanied her. This time she took the red scarf from her waist and used it as an instrument meant to entice a man.

She twirled as if to a measured rhythm only she heard. Her green skirt and white petticoats billowed out to reveal long, perfect legs. Legs he wanted around him. She slid the scarf in imitation of a caress along her slender arms. Then she moved the red silk along her body.

Dang, he was hot as a gunslinger’s pistol and just as hard. His manhood strained against his britches until he thought he’d pop through the fabric. He loosened the buttons and stepped from his clothes, never taking his gaze from her. Reaching behind him, he turned back the bedding and sat on the sheet.

Before his heat warmed the cool fabric, she pulled him to the middle of the room and circled around him. He pivoted, naked as a newborn, and watched her every move. Dipping, fluttering, and arching her lithe frame, she lured him with each sinuous flow of her body.

Her flaming hair streamed around her in a fiery cloud. She looped the scarf over his head, and the red silk left a tingling trail across his shoulders and down his right arm. Then she threaded it around her own shoulders and sawed it while she shrugged first one shoulder up and then the other one. Fabric of her blouse pulled taut against her full breasts and pushed the peaked nipples into view.

Dang, he couldn’t take much more of this, or he’d explode like fireworks on the Fourth of July. On and on she whirled and kicked, first coming near to brush against him, then moving back with a captivating smile. Teasing him with the piece of silk as she pulled it across his body, she seared him with her touch and made him part of her beguiling ritual.

When he could stand it no longer, he said, “Come here, let’s dance together in bed.” To his ears, his voice rasped hoarse with the need that burned inside him.

She approached slowly, seductively, with fluid grace. As she moved, she drew off her remaining clothes. Twining the scarf around his wrists, she pulled his arms high until she slid under them, imprisoning him and herself in their circle.

“Now we are truly bound together,” she said, her voice breathy from her exotic dance.

“Am I your prisoner, then?” he asked, amused at her tempting play even as her touch fueled his need.

“Yes, and I am yours.” She met his gaze, but her jewel eyes held uncertainty. “Did I please you then, or was I too forward with meself?”

“You are beautiful and graceful, and your dance was even more special than I’d hoped.”

She breathed a big sigh. “Then you approve and will be taking me to bed now?”

“I suppose I must do as you say, since I’m your prisoner.” He nibbled at her neck, and she released the scarf binding him. The silk fell from his skin as her arms slid around his shoulders.

If you haven’t read this book, I hope you’ll take advantage of the sale. I admit I love THE TEXAN’S IRISH BRIDE. Of course I love Cenora and Dallas, but I also love the O’Neill family—even grumbly Mac.
Posted by Caroline Clemmons at 10:04 AM