Remember When (In Death) by Nora Roberts and J.D. Robb 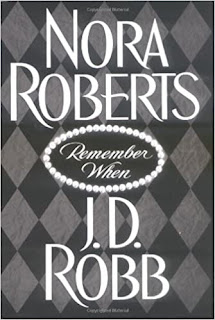 Nora Roberts writes wonderful romance stories.  Under the pen name J.D. Robb, she writes a romantic suspense series set in the future in New York called In Death.  I really prefer the In Death series, but Caroline Clemmons tells me they are a bit too detailed on the manner of death for her.  In 2003, Nora Roberts published a double book called REMEMBER WHEN.  The first book was written by Ms. Roberts in her normal romance style.  The second book was written by J.D. Robb in her normal style.  I loved both books.

After putting her life as the daughter of a con man behind her, Laine Tavish, proprietor of an antiques emporium in Maryland, finds her past coming back to haunt her after the death of her uncle and a dangerous hidden fortune and joins forces with sexy Max Gannon to uncover the truth about a case that will not be solved for years, until NYPD Lieutenant Eve Dallas gets on the case.

Apparently, I was not the only one who loved both books.  Caroline tells me she was at the Romance Writers of America (RWA) conference the year the books were entered in the RWA contest for best romance.  Each book was a finalist.  When the IN DEATH book by J.D. Robb won, Nora Roberts stood up to give her acceptance speech and became J.D. Robb.  Her acceptance speech was very sassy and funny.  She put down Nora Roberts for thinking she could compete against her, J.D. Robb.  Caroline says it was very enjoyable.

Posted by Stephanie Suesan Smith, Ph.D. at 8:04 AM