Excitement is building… Fall is here! That means we’re gearing up for cooler weather and the holidays. I’m also excited because I have a book on sale. I love a bargain and hope you do, too.

Don’t you agree that being thrust through time would be spooky? If you went back in time, at least you’d have knowledge of history to get you through. Ah, but what if you were zapped ahead?

In that case, everything would be new and unfamiliar. Some buildings might remain from your time, but even those likely would be altered. Houses would have different residents.

That’s what happened to Penelope “Penny” Terry in the book TEXAS LIGHTNING, Texas Time Travel Series Book 1. The feisty redheaded rancher is running from rustlers when a lightning strike spooks her horse. Penny is thrown and rolls into a borrow ditch before she’s knocked unconscious. When she comes to, she’s soaking wet and must walk through the rain to her home.

As the headline indicates, TEXAS LIGHTNING is on sale for only 99¢ from Saturday, October 9 through Thursday, October 14th. Don't miss this chance to snap up this book at a bargain price. Of course, it's always free in Kindle Unlimited. You can also purchase it in print. 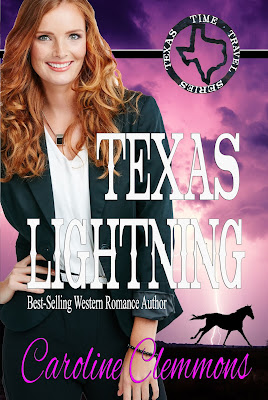 How can two people from different eras own the same ranch?

Penelope Jane Terry knows everything about ranching in spite of being a lone woman. She is determined to send to jail the rustlers who believe they can steal what is hers… until she is caught spying on their dirty works and must ride for her life. What Penny doesn’t count on is being hurtled almost 125 years into the future.

Jake Knight believes the attractive woman who stumbled into his home one rainy evening either has amnesia or is certifiably insane. Unless, that is, she is in league with whoever is trying to drive him out of business. Someone is trying to force him to sell his ranch by staging a string of damaging incidents. Jake’s been kept so busy making repairs that he can’t run his ranch. Even if he were stupid enough to wish to sell, the ranch is so firmly entailed that no one can break the conditions.

Jake gradually learns Penny is who she claims, no matter that time travel is supposed to be impossible. They’re locked into a clash that only one of them can win. If an outsider weren’t trying to kill Jake as well as bankrupt him, perhaps he and Penny might be able to reach an agreement. But, there is also that treasure….

Find TEXAS LIGHTNING for sale on Amazon at https://www.amazon.com/Texas-Lightning-Time-Travel-Book-ebook/dp/B07B6R1K44

She should have gone around to the back door, but she couldn’t walk another step. Weariness and sore muscles overwhelmed her and she wanted nothing more than to shuck out of her wet things and lie in her nice bed—if she could summon the energy to walk upstairs. She heard footsteps approaching and raised one foot. Eyes closed, she leaned back against the stairs.

“Had me a passel of trouble, Jake. Help me get these danged boots off, would you? Then I’ll tell you all about it.” A dog’s cold nose pressed against her cheek. She jumped and pushed her hair out of her eyes. A black and white dog stared at her. “Who are you?”

“His name’s Rascal.” An unfamiliar baritone said, “He’s mine.”

Whoa! The man who faced her wasn’t Jake. In spite of her wariness, her mouth dropped open in awe. Instead of her arthritic middle-aged cook, this man was young and tall and definitely fit. And handsome. Unbelievably, mesmerizingly handsome.

He might be as comely as a fairy tale prince, but the regal disapproval on his face appeared anything but friendly.

Energized by fear, she jumped to her feet and grabbed her rifle. “Who the heck are you?”

He crossed his arms and ignored the Winchester pointed at his middle. His dark hair glistened in light that seemed too bright. Dark blue eyes had tiny creases at the corners, as if he laughed a lot.

He sure wasn’t laughing now.

“I might ask you the same question. And what are you doing tracking in mud and dripping water all over my foyer?”

“Your foyer? This is my house, and it’s been my house since my daddy and I built it six years ago. Don’t you think for one minute I’ll let you steal my home.”

The dog growled, the fur of his ruff bristling.

Who was this man? He didn’t look the type but maybe he was one of the men stealing her cattle. Could he and his dog have been waiting for her? She gripped the rifle with all her strength. Why hadn’t Jake shown up to help her?

Oh, no, had they killed Jake?

Penny’s knees trembled, but she fought fear to appear strong. “Don’t try and trick me. The Double T ranch was started by my granddaddy in 1836. No con man is going to steal it from the Terry family, and you can take that to the bank.”

“The Terry family hasn’t owned this since Penelope Terry died in 1896. Knights have owned it since then.” He threw up his hands. “Hell, why am I arguing with a crazy woman?”

“Crazy?” She was about to light into him when the first part of his statement hit her. “Hey, what do you mean, I died? I’m as alive as you, whoever you are.”

“What the hell are you talking about? I see you’re alive. I said Penelope Terry died. Are you hard of hearing as well as nuts?”

Increasing fear spiraled inside Penny, knotting her stomach. How could this man think her dead? What kind of trick was he working? Had she been conked out long enough that Jake sent men out to look for her and they decided she’d died?

Forcing herself to appear calm when she shook inside, Penny stood erect. “I’m Penelope Jane Terry and you can see I’m very much alive…”

Poor Penny has a heap of trouble—but then, so does Jake Knight. If you haven’t already read this time travel, I hope you want to know how they work things out between them. Plus, discover who’s deviling Jake and why?