JANUARY SALE ON A POPULAR TRIO!

Great news! I’ve just reduced the price on this popular trio from the Pinkerton Matchmaker series, MAGDALA, LYDIA, AND JUDITH, books 37, 56, and 77. And now you get all three books ($2.99 if purchased separately) for $6.50—a genuine bargain!

https://www.amazon.com/gp/product/B08L19TRH5/
I loved writing these three stories. The main characters are among my favorites. If you haven’t read the stories, this is a great time to grab them. Of course, they are also in Kindle Unlimited as individual books. 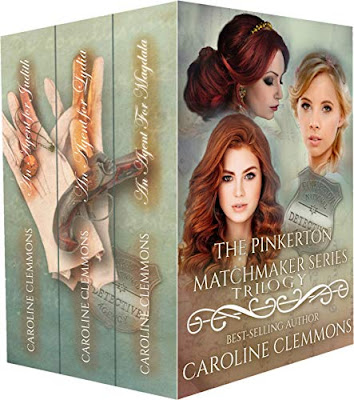 Here’s the descriptions for each of the three.

About An Agent For Magdala She craves adventure, but this may be too much… His job means the world to him… Capturing jewel thieves will test both of them. Magdala “Maggie” Harper leaps at the opportunity to become a Pinkerton agent. Learning the position requires a paper marriage shocks but doesn’t deter her. She plans to get an annulment before her unusual family learns of the situation. She’s determined to prove she has the grit to be an excellent investigator. But, why does she have to be partnered with the one man who has been rude to her?

Douglas “Cloud” Ryan loves being a Pinkerton agent. Otherwise, he’d never go along with his boss’ crazy plan to marry him to a female agent. He’s certain Maggie needs to stay in the background and let him solve the case. He has reasons to distrust women, especially women like Maggie.

Can Maggie and Cloud catch the jewel thieves plaguing an historic San Antonio hotel without becoming victims? Will they take a chance on the love growing between them? About An Agent For Lydia When Lydia Wood is left at the altar, she believes something beyond her groom’s control has happened. Two years with no word have hardened her heart. She has to get away from her parents’ constant urging her to choose an acceptable husband and wed. Becoming a Pinkerton agent suits her plans.

Pinkerton Agent Jake Hunter has recovered from injuries that put him in a coma and a long convalescence. He realizes Lydia would have been injured had she been with him. He vows to distance himself from the one person who means the world to him to protect her.

When they are paired for an investigation of bank robbers they must follow the trail to a dangerous hang out of men on the run. Can the two successfully pull off their charade and capture the robbers or will this trip confirm Jake’s worst fears? About An Agent For Judith She has vowed to rescue her brother… He is determined to protect his group… Together they must outwit a cruel and powerful man. Judith McAdams’ brother in New Mexico hasn’t been heard from since a letter saying he was being harassed by a neighbor who wanted his ranch for the water source. She vows to go help him in any way she can. The woman who raised her insists on going. Judith wires the marshal to check on her brother. When he refuses, she goes to the Pinkerton Detective Agency in Denver. She learns she can become a Pinkerton agent if she marries one. She seizes the opportunity.

Peyton Knight values his job as a Pinkerton agent and is good at being a lawman. To keep the job he reluctantly agrees to a marriage of convenience with Judith. Together they will go to her brother’s rescue. Peyton is impressed with the beautiful redhead—if only she would admit he knows best. He even admires his mother-in-law but how did he end up with her on their trip? At least he’s found three men he trusts to help him rescue the brother.

Their journey is filled with obstacles. Will Judith’s brother still be alive by the time they reach him? When they resolve the ranch issue, will Judith and Peyton part ways?

May your new year be blessed!