Do any of you remember the movie “Seven Brides for Seven Brothers”? The movie is old, but still shown on cable. Several years ago, four of us discussed the movie and what fun it would be to do a group of books on that theme. Cynthia Woolf originated the idea and asked Callie Hutton, Sylvia McDaniel, and me to participate in The Surprise Brides. Each book stands alone, although they are certainly more enjoyable when read in order.

Seven couples were too many, so we pared the brothers to four. No kidnapping wives, though, and we wanted a minister available to marry them while they’re snowbound. We solved that by making one of the brothers a minister. Hmm, is it legal for a minister to perform his own wedding? In these books, it is.

Set in fictional Angel Springs, Colorado and the Fraser Circle F Ranch, the setting is beautiful. Colorado is one of the loveliest states I’ve visited and I enjoyed planting these young women from the Chicago area on a picturesque ranch. Between the four couples, humorous situation arose.

We had no idea how difficult meshing the four stories would be. We each had to tell our story and include the other three couples but not give away their stories. We had to do this in a way that wasn’t repetitive for each book. No “read one, read them all” for us! Later we agreed this was the hardest book each of us had ever written. However, they are fun, romantic and adventurous novels. I have to admit I like the way mine turned out.

Here’s the gist of the plots. Fiona Fraser wants her boys married. Each has promised, and Jamie is a widower, but she wants four suitable daughters-in-law and lots more grandchildren. Posing as each of her sons, Fiona writes away for a mail-order bride for each of the men.

As she planned, all four women arrive the same day in a snowstorm that keeps them snowed in for five days. Mama Fraser is happy; the brothers, not so much. The brides are shocked they’ve been duped into coming halfway across the country to marry men who don’t want them.

The brother I drew is Jamie, the eldest, who is a widower with two rowdy children. He’s a handsome rancher who loves his family and thinks kids should be allowed to be kids (Translation: the little hellions run wild). The woman Mama chose for him is Olivia Stewart, a school teacher. Mama figured a woman used to teaching a room full of kids could handle two. 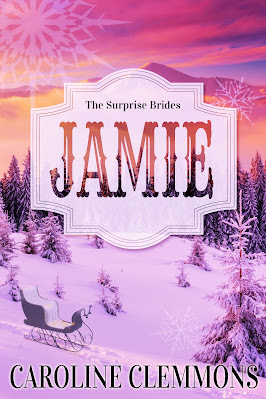 Here’s the blurb for THE SURPRISE BRIDES: JAMIE:

Olivia Stewart risks everything to accomplish her dreams. She’s tired of being pitied because she’s been jilted, tired of teaching other people’s children without any of her own. When she signs with a matrimonial agency, a letter from Jamie Fraser sounds perfect. A widower with two young children will give her a head start on the family she’s determined to have. But Colorado holds surprises for Olivia that jeopardize her goals and even her life.

Rancher Jamie Fraser is shocked to learn his mother has written for a mail-order bride for him! He has two children and no plan to marry again. Ever! His late wife taught him women can’t be trusted. Even his beloved mother isn’t above tricking her sons to achieve her heartfelt ambitions. Now he’s stuck with a wife he didn’t want—a stubborn woman bent on changing his home and his life.

Can two strong people at odds achieve happiness? Angel Springs, Colorado is a small town that inspires big dreams. Olivia and Jamie just might find their dreams meld to form a powerful and enduring love.

I thought you might enjoy a brief excerpt from THE SURPRISE BRIDES: JAMIE, set the morning after their wedding night:

Jamie woke feeling renewed in every way. He hadn’t realized how much being without a woman had contributed to his stress. Damned if he wasn’t fit as a fiddle this morning. He lay in bed with his arms beneath his head.

Beside him, Olivia slept on her side, the light setting her long hair shining like pure gold. Embers in the fireplace still warmed the room but he was uncommonly loathe to slip from the cocoon of his bed. The door suddenly burst open and Jake rushed in followed by Cat.

Olivia raised her head. “Oh, look Big Bad Wolf, here are the Woodsman and his assistant but they’re too late to save me.”

He leaned near her. “You didn’t appear to want saving last night, Red.”

“Papa, why aren’t you up yet? Grandma said breakfast is almost ready.”

“Jake, what did I tell you about coming inside married folks’ room? You can’t go barging in on me or Uncle Gideon or Uncle Ethan now. A married lady needs privacy in her bedroom.”

Cat tugged on his hand. “Then come on and let’s go downstairs.”

He sat up, careful to keep the cover over his privates. “You two go on and tell Grandma we’ll be down in a few minutes.” When they didn’t move fast enough, he added, “Git on now or I’ll swat your behind. And close the door behind you.”

Jake slammed the door, letting him know his son was put out with him.

“Have you ever swatted them?” Olivia left the bed and reached for her wrapper.

“Once or twice.” His anger surfaced and he shoved his legs into his longhandles and then his pants. “You act like you think I’m not a good father, but I am. My kids mean everything to me.” He stomped into his boots.

She pulled her pantalettes and petticoats on under her gown. “I know they do and they love you. You just don’t discipline them. That’s a disservice to them and to everyone in the family.”

Taking a clean flannel shirt from a drawer, he pulled it on over his longhandles and worked the buttons. “I suppose you think you know all there is to know about raising children since you have so many yourself.”

She curtsied. “Touché, Mister Fraser. But I do know a lot about children. I’ve taught school for eight years and was well-respected by both students and parents, um, with one or two exceptions.”

He stopped dressing long enough to point at her. “Yeah? Well my kids are an exception. I don’t need you interfering between me and my kids.”

Her jaw set in what he figured was stubborn determination. He had to start as he meant to go on or he was lost. “Yes, you do. Either I’m your wife and their stepmother or I’m just your doxy. Is that what you had in mind?”

He splashed water on his face and combed his hair. “I had in mind staying single and raising my kids. Since my mother brought you to the Circle F, you can spend the day talking to her and helping around here.”

She raised her eyebrow and smiled. “Should I move my things to her bedroom then? If I’m only here as her companion, there’s no point in my sleeping in here.”

He didn’t like that smile or being given what he figured was an ultimatum. He strode toward her. “Don’t you go there, Olivia Fraser.” He pointed at the bed. “You’re my wife and, by golly, you’ll share my bed every night.”

Her hands on her hips, she took a step toward him and her gaze locked on his. “Then, by golly, I’ll also be your partner and rear your children to be well-mannered and responsible individuals.”

She was mocking him and he didn’t like it, not one bit. On the other hand, he’d sure enjoyed having her warm his bed last night. Damned contrary, pushy woman.

What should he say to derail this argument? “They’re good kids. They’re just boisterous and full of energy.”

With her back turned, she yanked off her gown. Sunlight from the window illuminated her and turned the beautiful skin of her back into smooth alabaster. In spite of his anger, his breath caught. He wondered if he could entice her back into his bed.

Before he figured a way to bring up the subject, she’d pulled on her chemise and dress. “I know Jake and Catriona are good at heart, but if you can’t control their behavior when they’re four and six, in a few years they’ll run even wilder than they do now. Do you want Jake in trouble with neighbors and the law and Cat in trouble with some slick-talking charmer?”

When she turned back toward him, she was buttoning a blue dress that matched her eyes. He supposed she didn’t wear a corset every day. Not that he cared. He couldn’t understand how a woman could tolerate the contraptions. Couldn’t be healthy.

Dammit, he wished his breathing would return to normal. “We need to go downstairs. How long do you spend on your hair?” He figured he was stuck here for half an hour or more. Maybe he should go down without her.

She smiled at him and picked up her brush. Within seconds, she’d de-tangled and twisted her long tresses into a neat bun at her neck. She walked over and opened the door. “Shall we?”

The e-book is on sale January 14-20 for only 99¢. JAMIE is also available in print and is enrolled in Kindle Unlimited. Amazon: https://www.amazon.com/Surprise-Brides-Jamie-Caroline-Clemmons-ebook/dp/B015272I3W

If you’d like to read the other three Surprise Brides, they are 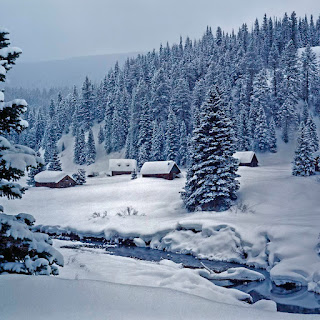 Most of you know my books. For those who don't, here's my bio:

Through a crazy twist of fate, Caroline Clemmons was not born on a ranch. To compensate for this illogical error, she writes about handsome heroes, feisty women, and scheming villains in a tiny office surrounded by research books and mementos. She and her Hero live in North Central Texas cowboy country where they ride herd indoors on their two cats and two dogs as well as providing nourishment outdoors for squirrels, birds, and other critters.

The over sixty books she has created have made her a Top 100 historical author, a bestselling author, and won awards. She writes sweet to sensual romances about the West, both historical and contemporary as well as time travel and mystery. In addition to her series she has written single titles and contributed to multi-author series and box sets. When she’s not writing, she loves spending time with her family, reading her friends’ books, dining in restaurants, browsing antique malls, delving into genealogy, checking Facebook, and taking the occasional nap.

Join her and other readers at Caroline’s Cuties, a Facebook readers group for special excerpts, exchanging ideas, contests, giveaways, recipes, and talking to like-minded people about books and other fun things.

To stay up-to-date with her releases and contests, subscribe to Caroline’s newsletter here and receive a FREE novella of HAPPY IS THE BRIDE, a humorous historical wedding disaster that ends happily—but you knew it would, didn’t you?