Don’t you love finding a new-to-you author you love and discovering the book you enjoyed is part of a long series?

If you are part of my Facebook group, you know that my bout with Covid left me with eyesight problems. For several months, I couldn’t read normal print books. My Librarian daughter was kind enough to search the local library for large print books. She looked for westerns and discovered several books in the Joe Pickett series by C. J. Box.

I hadn’t read any of these books previously, but I devoured them. Problem was, those available in large print weren’t sequential. I overlooked the gaps mystifying me and kept reading. I really like Joe Pickett.

Joe is a game warden in Wyoming—a perfect hero. He is an efficient, by-the-rules good guy forced to deal with corruption and murder. Every hero has to have a flaw. One of the things that amused me is that Joe Pickett is a lousy marksman. But, he’s also a devoted family man to his wife, Marybeth, and daughters, Sheridan and Lucy. Marybeth’s mom, who detests Joe because he doesn’t make much money, appears in many books.

Like many good guy protagonists, Joe has occasional help from his off-the-grid friends, My favorite is  Nate, a falconer. Until this series, I had no idea falconry was used to control pest birds from harming crops and harassing shopping mall patrons.

In fact, I learned something new in each book. The writing is not at all pedantic. The descriptions are injected into the story as part of the crime and solution. For instance, in one the murder occurred on one of the huge wind turbines used to generate power. In reaching the victim, Joe has to climb to the top of the machine.

If you like western heroes, mysteries, and small town series, then you’ll enjoy C. J. Box’s Joe Pickett books. The first in the series is OPEN SEASON. I found it on Amazon at https://www.amazon.com/Open-Season-Pickett-Novel-Book-ebook/dp/B00452V3VE It is also available in audio. 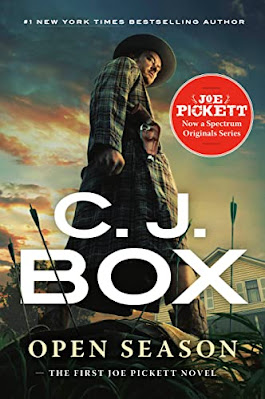 Joe Pickett is the new game warden in Twelve Sleep, Wyoming, a town where nearly everyone hunts and the game warden--especially one like Joe who won't take bribes or look the other way--is far from popular. When he finds a local hunting outfitter dead, splayed out on the woodpile behind his state-owned home, he takes it personally. There had to be a reason that the outfitter, with whom he's had run-ins before, chose his backyard, his woodpile to die in. Even after the "outfitter murders," as they have been dubbed by the local press after the discovery of the two more bodies, are solved, Joe continues to investigate, uneasy with the easy explanation offered by local police.

As Joe digs deeper into the murders, he soon discovers that the outfitter brought more than death to his backdoor: he brought Joe an endangered species thought to be extinct, which is now living in his woodpile. But if word of the existence of this endangered species gets out, it will destroy any chance of InterWest, a multi-national natural gas company, building an oil pipeline that would bring the company billions of dollars across Wyoming, through the mountains and forests of Twelve Sleep. The closer Joe comes to the truth behind the outfitter murders, the endangered species and InterWest, the closer he comes to losing everything he holds dear.

I hope you enjoy this series as much as I do. Whatever you choose, keep reading and stay safe!

Posted by Caroline Clemmons at 7:51 AM

Great series. By the way, there is a book of short stories as well. Review on my blog.