The Starling (Wings of the West Book 8) by Kristy McCaffrey 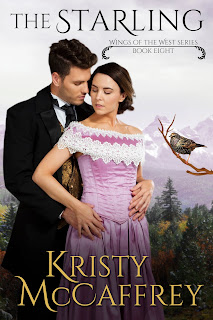 The Starling (Wings of the West Book 8)

Kate Ryan has always had a streak of justice in her. When she decides to apply to the Pinkerton Detective Agency, nothing will stand in her way. Initially hired in a clerical position, she quickly works her way up to field agent with the help of her mentor, Louise Foster. When Louise is injured, Kate gets her first assignment and the opportunity of a lifetime.

Henry Maguire has been undercover in the household of wealthy entrepreneur Arthur Wingate. Employed as a ghostwriter to pen the man’s memoir, Henry is also searching for clues to a lucrative counterfeiting scheme. When Henry’s “wife” shows up, he’s taken aback by the attractive woman who isn’t Louise. Now he must work with a female agent he doesn’t know and doesn’t necessarily trust. And because he has another reason for coming into Wingate’s world, Kate Ryan is unavoidably in his way.

Kate Ryan is the daughter of Matt and Molly from THE WREN, and THE STARLING is the first of five novels featuring the second generation of Ryans in the Wings of the West series.

The Wings of the West Series Reading Order

Book One: The Wren

Now available in ebook and paperback

“Your wife has arrived, sir.”

What the hell? Louise was here? Now?

Jonesy had agreed that Louise Foster would be summoned when Henry sent word. And he hadn’t sent word. Dammit.

“Of course,” Henry replied. “Thank you.”

Henry thought of abandoning the drink he’d been nursing for the last hour, but instead kept it as he followed the valet through clusters of people and the low din of talking and laughing. In fact, he took a large gulp as he walked to soothe his nerves. Sometimes his own rules needed to be amended. This wasn’t a disaster, he reminded himself. Louise was a good field agent, one he’d worked with more than once, and he respected her abilities. She was also his friend, one of the very few along with Jonesy. If she were here now, there must be a good reason. While his cover had included a wife, Henry rather liked working alone, and he’d told Jonesy that Louise could join him when it seemed necessary. And it hadn’t been necessary … yet. But apparently Edgar Jones had pulled rank, thinking differently.

As Henry entered the foyer, his gaze landed on a young woman in a stunning blue gown, curls of dark brown hair accenting her oval face, her figure lithe and youthful. Her reserved countenance indicated her discomfort as she conversed with Arthur’s wife, Lottie, near the front entrance, and Henry couldn’t help but feel sympathy for her. Lottie Wingate had been mostly unwelcoming to him.

The young woman’s poise drew his eye and for a moment, Henry considered what it would be like if he weren’t working, if he could simply pursue a conversation with an attractive woman. He had purposely not set down roots. His work made it impossible. Well, not impossible. He’d simply never met a woman who could turn his attention from his job.

And hell if that didn’t remind him that he was more like his old man every day.

He pushed aside the memories of the last time he’d seen his father, of the terrible fight they’d had, of the anger that had pulsed white hot within Henry.

Instead, he focused once more on the alluring distraction of the woman in blue, and then, reluctantly, he peeled his eyes from her and searched the foyer for Louise, but she was nowhere to be seen.

“She must have stepped into another room,” Henry said to the valet.

“No, sir.” The young man stopped and gave a nod toward Mrs. Wingate and the striking woman beside her.

Henry endured a brief state of confusion, an unnatural occurrence since he kept everything in his life compartmentalized and in order.

Recovering quickly, he said, “Of course, thank you. I must need my spectacles this evening.” He left the valet before he was forced to converse further, giving even more opportunities for a slip up. He walked slowly to the two women, since he wasn’t certain what he should say. Clearly, the valet had been misinformed.

Henry glanced over his shoulder, confirming the man had left the foyer. With the all-clear, Henry shifted his path to miss the two conversing women, although a twinge of regret flared. A small part of him wondered what would happen if he struck up a conversation with the woman who drew his gaze with such ease. But now wasn’t the time for personal interests. Just as he passed within three feet of the women, a voice rang out, “Gilbert! Darling!”

Henry stopped and faced the woman who had in a brief span sparked such an intense interest in him. She’d used his alias. It all became clear in an instant.

She was his wife. 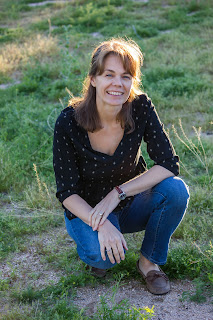 Kristy McCaffrey writes contemporary adventure stories packed with smoldering romance and spine-tingling suspense, as well as award-winning historical western romances brimming with grit and emotion. Her work is filled with compelling heroes, determined heroines, and her trademark mysticism. She likes sleeping-in, eating Mexican food, and doing yoga at home in her pajamas. An Arizona native, she resides in the desert north of Phoenix with her husband and their rescued bulldog, Jeb. Learn more at her website https://kmccaffrey.com/

Caroline,
Thanks so much for letting me stop by and share and excerpt from new release.
Cheers!
Kristy

Thanks for sharing with readers, Kristy. No more comments, but good page views. I wish people would leave comments. It is hard to comment from a phone.