Matters of the Heart : A Shumard Oak Bend Novel by Heidi Gray McGill 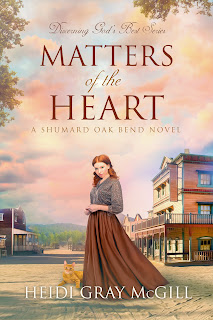 Katie determines to be their champion, no matter the fallout.

Will the man who fought for the other side also fight for her?

Unconventional Katie empathizes with the widows and orphans of the Civil War, searching for a place to call home in Shumard Oak Bend. But with no one to help her, she’ll need to do it secretly, a challenge she readily accepts. She’s taken charge before, and she’ll do it again, no matter who she has to outwit to get the job done.

He vowed to be his own man and stop doing everyone else’s bidding. But he follows orders when a pair of emerald green eyes, blazing red hair, and freckles that dance on the bridge of a pert nose conscript him to duty. Be his own man. Who is he kidding? Skunks don’t change their stripes. They leave disasters in their wake wherever they go, just like him.

Overcoming personal obstacles and finding your true self doesn’t mean going it alone. Yet the answer isn’t always in the one you seek.

A flush of adrenaline tingled through Katie’s body. She’d made it into the kitchen without the floor squeaking or the door scraping. Right hand on the latch, she applied pressure to the wood with her hip, hoping that the door would be just as silent as it settled into the warped frame.

“Oh, my! Aunt Aideen, you gave me a fright.” Katie yelped and flung herself around, her hand at her throat to hide the pulsing vein in her neck. The empty plate and fork she’d tucked under her arm slipped from their hold. She grabbed for the plate, but the fork clattered to the floor.

“Where have I been?” Katie’s voice rose in pitch. “The barn.” She felt a flush cover her cheeks and bent down to retrieve the utensil, hiding her face, hoping Aideen would think the redness in her cheeks was from the exertion of the movement. Katie watched the familiar, reddish-brown eyebrow lift, letting her know Aunt Aideen expected the rest of the story. Katie set the items down then busied her hands making tea.

“Care for a cup of tea?” Katie’s heart raced and she could not quell the fluttery feeling in her belly.

“That and an answer.” Aideen sat and folded her hands in anticipation.

Katie’s posture stiffened. Her back to her aunt, she forced a smile before turning with two cups of tea. “Fine.” Katie hesitated as she took her time placing the cups on the table. “Would you care for a cookie?” She reached for the tin.

Katie arranged her skirts as she sat, delaying the inevitable. “I was in the barn feeding…” Nerves frayed, her leg bounced as if the pumping motion would help get the words out.

Katie’s heart thudded in her chest, and she was sure her aunt could see the tatted collar move up and down. Why was she nervous? She’d done no wrong. She crossed one leg over the other, her knee hitting the underside of the table. Ignoring the pain, she used her napkin to wipe up the tea that had breached the rim of her cup.

“Care to explain the plate?”

Katie lifted her chin. She did not want to burden Aideen, nor would she be dissuaded from her mission. She carefully uncrossed her legs and willed herself not to choke, stalling as the small sip of her tea went down wrong.

“I see. If you’ll not tell me, perhaps I’ll simply guess. We’ve no animals but a stray cat. Are you to tell me, or not as it seems, that you have someone holed up out there?” Aideen’s Irish accent increased along with her volume.

“Now, before you get your dander up, I took nothing that didn’t already belong to me.” Katie’s indignant tone did not help the situation.

“Serving yourself a double portion and only eating half?” Hands flat on the table, Aideen’s eyebrow raised higher than Katie thought possible.

“Aunt Aideen.” Katie’s bouncing legs slowed, as did her speech. “I can’t let them go hungry,” she argued.

“No!” Katie shot to her feet and began pacing with a purposeful stride, picking up speed around the table, and increasing in volume as she spoke. “The women and children did not ask to be left widows and orphans from the war. Even the Good Book says we’re to care for them. Aunt Aideen, you of all people, widowed now less than a year, should know the devastation, the loss they are feeling. You have a home. They’ve lost theirs. They have nothing.” Her voice cracked with emotion.

“Oh, me girl. I know you be right, and I don’t mind you giving to the needy. But the magistrate were most clear on the matter. If he catches you, you’ll be in a heap of trouble.”

“I won’t get caught.” Katie straightened her posture even more, her chin jutted forward which was difficult with the tightness in her neck and jaw.

“Ach. I pray you don’t. For your sake, and theirs. And mine.” Aideen’s last words came out in a whisper. 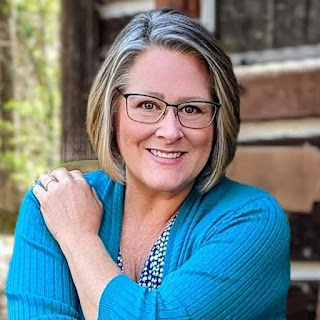 Whether historical or contemporary, you will find Heidi’s works to be true Christian Fiction, full of God’s redeeming love.

Everything Heidi writes is purposeful. She believes in bringing a reader into the awareness of who God is to them and how He interacts with them on a personal level. She does this by crafting characters so relatable you feel part of who they are.

Heidi reaches deep into the reader’s heart through masterfully written words and offers ways toward healing by seamlessly applying God’s Word throughout her stories.